The popularity of pickup trucks is growing enormously, as is the luxury end of the car market. Today, those trends are merging in the $80,000 luxury pickup.

That's mid-size Mercedes sedan money for one of the most ubiquitous vehicles on the planet.

Of course, most pickup buyers don't spend that much. The average transaction price for full-size pickups is about $45,000, says Mark Alger, General Motors' brand manager for Buick and GMC. That means many buyers are paying more and, Alger says, the momentum in the market is in the $50,000-and-up range. The basic work truck? That's a shrinking segment.

Interviewed at the Toronto auto show last month, Alger stood next to a GMC Sierra with a window sticker totalling $76,595. GMC already pitches itself as an upscale brand and layered above it is its Denali sub-brand. All Denalis are fully loaded Crew Cab 4x4s, Alger says, and they account for about 25 per cent of all GMC pickup sales.

Michael Sinulta, a product manager at Ford Canada, quotes a similar percentage of F-150s sold in the top trim levels – King Ranch, Platinum and Limited. The starting price for a King Ranch SuperCrew 4x4 is about $65,000. And that's before you dip into the extensive options menu. The Limited – a trim level Ford added for 2016 above the previously flagship Platinum – starts at around $74,000. GMC's Sierra Denali lineup starts at around $65,000, too.

FCA also recently added a new crème de la crème trim, the Laramie Limited, to its Ram pickup line. Assuming similar trends apply for Ram, it all adds up to some serious coin being spent – and earned – on "pretty trucks," as Alger whimsically calls them.

"These vehicles are getting priced sometimes at luxury-vehicle levels, and that may necessitate changes in how the manufacturers view the marketplace," says Robert Karwel, Toronto-based senior manager of the automotive division at J.D. Power. "Often times, someone who buys a full-size truck could easily afford a compact or even mid-size luxury sedan, but they still opt for the truck. Why? It comes down to three aspects: product, incentives and image."

Big-buck pickups perform much the same duties as less expensive models. "You have these contractors and they have one vehicle for their family and for their job," Ford's Sinulta says. "But they also don't want to give up on the luxury aspects they have in an SUV or a sedan. It's not like we weaken the truck at all. It still has the capability for the work site as well."

"They take you to work, haul the family [up to six people with a front bench], bring home the groceries and they are your play vehicle on the weekend," he says. "Fuel economy is dramatically improved from 10 years ago, as have driving dynamics with availability of 20[-inch] and 22[-inch] wheel packages.

"In a nutshell, they do it all, no questions asked. It seems Canadians are willing to open up their wallets for such capability."

There can be a double-barrelled incentive – financial, in the form of generous interest rates and discounts (see: Deals of the Week); and image, in that a pickup truck can project strength, practicality and a touch of luxury simultaneously. "You don't have to explain yourself," Karwel says.

Alger says Denalis can be spotted on construction sites, although it's more likely to be bosses driving them. "The guy who owns the company will be in an HD Crew Cab duallie Denali. The workers on the site might not be in a Denali because it might be too pretty for that type of application."

Ah yes, let's not forget the heavy duties that account for the other 20 per cent of the big-pickup segment. A loaded HD Denali tops out at around $95,000, Alger says.

Those ultimate work trucks attract another class of customers that are dedicated to leisure: RV owners. The rule of thumb is that to tow more than 10,000 pounds, you need a heavy-duty, Alger says. HD or not, RV towers also want all the bells and whistles. 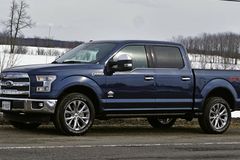 Ford gives F-150 a new face and turbo diesel option
January 8, 2017
Bolt, Pacifica, and Ridgeline named car, utility and truck of the year
January 9, 2017
Follow us on Twitter @globeandmail Opens in a new window
Report an error Editorial code of conduct
Due to technical reasons, we have temporarily removed commenting from our articles. We hope to have this fixed soon. Thank you for your patience. If you are looking to give feedback on our new site, please send it along to feedback@globeandmail.com. If you want to write a letter to the editor, please forward to letters@globeandmail.com.
Comments