But the Touareg's little brother, the Tiguan, has not garnered the same kind of accolades. While a decent enough little SUV in its own right, it's rather expensive, and doesn't offer the same kind of performance or versatility as the Touareg. It also lacks a diesel engine option, which could make a difference as well.

Restyled slightly for 2012, and looking more like the Touareg than ever, the Tiguan is powered by a 2.0-litre, four-cylinder engine that is turbocharged, intercooled, and features four valves per cylinder and twin overhead camshafts.

This engine is used elsewhere by VW, and it sets the Tiguan apart from the herd, as many four-cylinder engines in this market segment have but a single overhead cam. Talk to any mechanic and he'll tell you that two camshafts reduces valvetrain wear and tear, so this is a good thing. That said, the Tiguan prefers premium grade gas – not so good.

Transmission choices are a six-speed manual or six-speed automatic with TipTronic and, depending upon the model, you can choose from either front-drive or VW's 4Motion full-time all-wheel-drive. My tester, a top-of-the-range Highline, had the latter drivetrain (the only choice with this trim level), but you can get 4Motion with any of the three models. Another good thing.

And while I like the Tiptronic transmission, it seems hyperactive in this application, and to be honest, I rarely used the manual shift feature. Interestingly, fuel economy for either FWD or AWD is virtually the same, and, according to Transport Canada, the manual transmission version actually has inferior fuel consumption in town. Hmmm.

Behind the wheel, the Tiguan has a solid tight feeling to it. Wind noise, road racket and tire whine is minimal and it feels well screwed together. But the ride can be very choppy – much harsher than other comparable models, like, oh, the Honda CR-V or Toyota RAV4. My tester felt every dimple and rut in the road surface and going over speed bumps required slowing the vehicle down to a crawl. My tester had the sport suspension, with larger 18-inch alloy wheels and Pirelli Scorpion all-season rubber.

This latter item is of questionable merit, in my opinion; if someone could point out the drawbacks of a traditional mechanical setup and why an electronic one is superior, I'm all ears, but the lever and cable arrangement has worked just fine for – what? – a hundred years, so I fail to see the point of electrifying the parking brake.

It also had the Sport package ($1,900), and that gets you the alloy wheels, LED headlights and sport suspension, which no doubt accounted for the unusually rough ride on my tester. I'd pass on the latter package, and have misgivings about the first. I've learned to appreciate Sirius radio and the back-up warning system is nice, but, look, I can go down to any auto parts store and pick up a decent Garmin or Tom Tom navi system for a fraction of this price.

And here's another thing; with these two packages, the price climbs up to and over the $42,000 mark. By way of comparison, a loaded BMW X1 is about the same amount of money. With 1,588 litres of cargo space, the Tiguan has it over the Bimmer for carrying stuff, but that's still a lot of coin to spend on an SUV with limited practicality.

Which is my major beef with the Tiguan. It's not big or roomy enough to be a useful SUV, doesn't handle particularly well, isn't really designed to go off-road and, if you choose the Highline version, costs a lot of money. The base Trendline, which has the six-speed manual transmission, and front-wheel-drive, is more than $10,000 less and has everything you really need in this kind of vehicle. 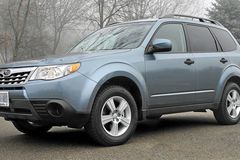 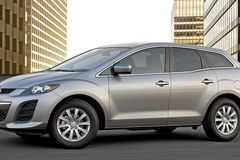