This will be a transformational year for Canada's big grocery chains.

The imminent arrival of Target Corp., coupled with continued expansion by Wal-Mart Stores Inc., suggests one or more of the incumbents could do a major deal to bulk up and compete better against the U.S. behemoths. And investor excitement about the transactions could lead to gains for the grocers' shares.

Just beware what happens next. Competition from the U.S. giants will eventually erode the grocers' profit margins – and share prices. For investors, the message is mixed: By all means, consider adding Canadian grocers to your portfolio this year; be sure, though, to sell before this story turns stale in 2014.

The sombre outlook stems from an inescapable fact of the grocery business: Size matters. As a chain grows bigger, it can command better prices from suppliers and invest more money in logistics and systems to make its operations more efficient. Canadian grocers need more heft – but even with key acquisitions, they will still face an uphill battle against the U.S. giants.

As Target prepares for entry this spring, and Wal-Mart continues to build its Canadian operations, incumbent grocers have been building war chests. Loblaw Cos. Ltd. plans to spin off property into a real-estate investment trust, raising several hundred million dollars in the process. Metro Inc. will get nearly half a billion dollars from selling half its stake in convenience store operator Couche-Tard.

These developments prompt analysts to suggest that U.S. grocer Safeway Inc. will sell its Canadian division, which racked up $6.7-billion (U.S.) in sales in 2011, primarily in the western provinces. With a strong presence in Vancouver, plenty of real estate, and a solid pharmacy business, it's an attractive property.

"Anyone would have to pay premium dollars – and then worry about whether it was worth it," says Ed Strapagiel, a long-time Toronto retail consultant.

Mr. Caicco, however, believes any of Canada's biggest three grocers – Loblaw, Metro or Sobey's (owned by Empire Co. Ltd.) – could pay that kind of price and immediately add to its earnings per share. Adding Safeway to their operations, he says, would drastically improve their purchasing leverage with vendors.

In his recent report, "2013 Grocery Consolidation Playbook," he estimates Loblaw could add $134-million (Canadian) to its bottom line in the first year, translating to a gain of nearly $12 in its share price. (The shares closed Friday at $40.88.)

He estimates synergies to be slightly less for Empire and Metro – $113-million and $97-million, respectively – and since the smaller companies would likely need to issue new stock to make a Safeway deal, he sees the per-share gains at just $3.77 and $2.33, respectively.

Mr. Caicco (who declined to be interviewed) suggests a Safeway sale could then set off a series of subsequent deals. In his playbook, he analyzes a sale of B.C. grocer Overwaitea, a Metro/Jean Coutu merger and a Loblaw purchase of Shoppers Drug Mart at $61 per share.

All of this prospective deal making could keep Canadian grocery stock prices elevated through 2013. But it may not change where they end up after that.

A decade or so ago, U.S. grocery giants Kroger Co. and Safeway had EBITDA margins of 7 per cent or more. As recently as 2006, they had enterprise values – market capitalization plus net debt – of more than seven times EBITDA.

In those 10 years, however, Wal-Mart tripled the number of its Supercentres to more than 3,000, and Target added more than 1,000 stores that had a full line of groceries or an "expanded food offering." Kroger and Safeway now struggle to keep their EBITDA margins above 5 per cent, and their multiples have shrunk to around five.

Loblaw and Metro currently have EBITDA margins between 6 per cent and 7 per cent and enterprise values of about eight times EBITDA. (Empire, which also has real estate and oil-and-gas operations, is more difficult to compare.)

It's not clear what would keep the Canadian grocers' margins – and multiples – from eroding to the levels of their much-larger U.S. peers.

And Jeff Doucette, the general manager of consultancy Field Agent Canada, suspects German deep-discounter Aldi could move into Western Canada and cause further damage. Canadians have a false sense of security about the size and strength of their grocers, he says. "When you look on an international scale, Loblaw ranks 39th among global retailers. There are easily three dozen global companies that could swallow up Loblaws tomorrow if they wanted to."

Of course, the impact of the U.S. mega-retailers won't happen overnight. Mr. Strapagiel, who says "there aren't many good arguments" against declining margins and multiples in the long term, believes Loblaw could fend off the trend for a while.

The company improved inventory management and distribution systems to reduce costs, and it operates a variety of store banners, from low-price grocers to ethnic markets. It has also experimented with the higher-margin Joe Fresh clothing line. "When you look at these possibilities – more efficiencies and automation, playing with the formats, and diversifying into other types of products – that could keep their EBITDA margins up a little longer."

Maureen Atkinson, a senior partner at retail consultants J.C. Williams Group, says Canadian grocers have seen U.S. peers lose customers to Wal-Mart and Target and have been "covering their weaknesses in preparation." She allows that their margins declining to U.S. levels is "possible … they can get hurt, but I don't think it's going to be fatal."

Investors who aren't fond of pain should be wary of holding the grocers' shares for the long term.

Canadian Tire, Loblaw in ‘battle mode’ ahead of Target arrival 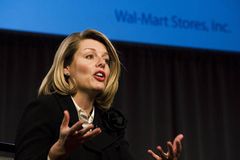 The Target invasion: How pricing will be key to Canadian success 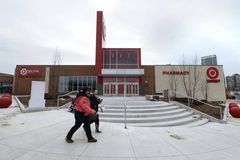