The most recent quarter for Postmedia Network Inc., the publisher of most of Canada's major-market daily newspapers, was not bad, at least not compared to the carnage it has recently reported. Revenue fell more slowly, and some measures of earnings were up. CEO Paul Godfrey said unequivocally, in the company's news release, "We have a strategy and it is working." He pointed to meaningful growth in the small share of the company's revenue drawn from digital offerings, as opposed to the print-related sales that continue to decline sharply.

Postmedia's ability to transform into a model for legacy media companies will take time – and the most pressing question, really, is how much time the debt-laden company has. A 2016 restructuring eased the most urgent problems for a while, but the company is running out of physical assets to sell, and each quarter of revenue declines requires cutting more costs, which, when they impact Postmedia's newsrooms, undermines the products it intends to carry into the digital future.

And while equity speculators – I'm unsure they should be called "investors" – have tripled Postmedia's stock price since last summer, the buyers of the company's bonds issued just over a year ago aren't purchasing them at face value, indicating continued smart-money skepticism that Postmedia can pull off this turnaround after all.

Let's start with the company's first quarter, which closed at the end of November – typically the strongest time of year for media sales. Overall revenue dropped by 10.3 per cent, the smallest decline since it absorbed the Sun newspapers and started reporting something akin to an apples-to-apples comparison. That translates to a $21.8-million decline – an important number, because when Postmedia touts its 14.5-per-cent gain in digital revenue, that double-digit increase represents just $4.0-million in new sales.

Postmedia has had many special charges and extraordinary gains in recent quarters, so a look at earnings measures other than net income may be appropriate. The company faced its revenue decline in the quarter by cutting costs even more aggressively. The result is that the company's operating income easily covered its interest expense for the first time in two years, per data from Standard & Poor's Global Market Intelligence. (Operating cash flow was slightly negative in the quarter.)

Company president Andrew Macleod, who spoke to me last week about the company's strategy, described a three-pronged plan for, as he put it, "extending the legacy business." Part of that is continuing to make a case for the power of print advertising, and another is the aforementioned cost reductions. The third, he says, is "aggressively selling non-core assets" to reduce debt levels, which stood at just under $280-million at Nov. 30.

The problem, however, is that these assets aren't worth nearly as much as Postmedia's debt. At Aug. 31, the fiscal year end where Postmedia reports its holdings in more detail, the company had $38.2-million in land and $76.2-million in buildings, net of depreciation. Land and property values on balance sheets can mislead: They're based on historical costs, and property is depreciated over time, whereas in real life it typically grows in market value. But because Postmedia did "impairment" testing in 2016, and in some cases wrote down the values of its land and property, the numbers may indeed be close to what they're worth. A couple of recent property sales, where Postmedia booked very small gains on the sale, help support that view.

Now, Postmedia has the properties where the Calgary Herald and Regina Leader-Post reside on the market, with the Calgary building easily the company's largest. Of the company's 10 largest properties, those roughly 50,000 square feet or more, six are in Alberta and Saskatchewan, commercial real estate markets that, shall we say, are no longer as hot as they once were.

So the company must cut to avoid losing money on operations, and the assets that otherwise would back the debt are insufficient to cover it. While equity holders have bid up the company's shares, holders of the company's new bonds, issued in 2016 as part of the restructuring at 8.25 per cent, are developing a different view.

According to Thomson Reuters Eikon, the bonds traded close to par until late May, but then began to decline in value, so much so that they traded by late August for 85 cents on the dollar, an effective yield that topped 13.5 per cent. They've rallied since, but are currently priced at 95 cents on the dollar, still a double-digit yield.

Certainly, there are better examples of distressed debt out there, but again, the point is that Postmedia issued these bonds just over a year ago as part of a significant restructuring that essentially wiped out its equity holders – and they're not trading dollar-for-dollar, implying little to no value to the new shares.

In my conversation with Mr. Macleod, he talked at length about the digital initiatives as the "second plank" of the company's strategy, with a commitment to advertising revenue instead of subscription sales, and moving away from hard-to-track "display" digital ads to more performance and data-driven efforts that match readers with the advertisers who want them.

At the same time, Postmedia needs to be "symbiotic" with Google and Facebook, the web giants who have pioneered that skill set. Mr. Macleod points to four quarters of double-digit revenue growth and says "What we're doing is actually working," in comparison to "just about everybody [who] is struggling for oxygen and calories in the digital landscape."

In our conversation, however, as Mr. Macleod pivoted from one plank to another, he summarized the company's work on the legacy business this way: "All of this is an effort to buy time. The question then becomes, 'Buy time for what?'"

He and Mr. Godfrey feel Postmedia can provide the answer. Time will tell. 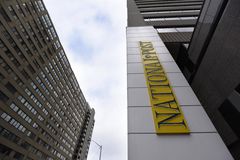 Which papers could potentially benefit from the Postmedia-Torstar deal?
November 29, 2017 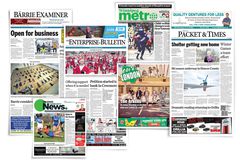