With all the excitement – some say hype – over Twitter Inc.'s IPO last year, you would be forgiven for thinking the microblogger was the only initial public offering of 2013.

In reality, it was a banner year for stock debuts of all types. More than 200 companies went public on the major U.S. exchanges, raising a total of $55-billion (U.S.) – the best year for IPOs since the boom year of 2000, according to the analysts at Renaissance Capital.

The activity in Canada was more muted, but still healthier than expected, says Dean Braunsteiner, national IPO leader for PricewaterhouseCoopers. There were 18 IPOs worth a total of $2.65-billion (Canadian), an improvement over 2012 but slightly more than half 2011's level.

Great news for investment bankers. But what did it mean for investors? Well, in the United States, there were quite a few home runs – indeed, Twitter's return of just under 145 per cent couldn't even crack the list of the top 10 IPO performers for the year. And IPO buyers could have beaten the overall market with more than half the new issues, even if they didn't get access to the offering price that's typically available to institutional investors.

In Canada, however, the results are underwhelming, with half the IPOs losing money from their offering price and nearly all underperforming the TSX/S&P Composite.

The Canadian results look particularly lacklustre in relation to their U.S. counterparts. According to data from Bloomberg, 223 companies went public on the major U.S. exchanges, with 11 of the offerings consisting of $1-billion (U.S.) worth of stock or more.

Investors hear – over and over again – that buying IPOs is a sucker's game. A company prices the offering to sell shares to institutions and wealthy brokerage clients. Small investors have little hope of buying at the IPO price, because the shares often zoom on the first day of trading.

To review whether it was a good year for all IPO investors, then, we should look at how an investor would have fared buying not at the frequently unobtainable offering price, but instead at the supposedly inflated first-day closing price. Is the IPO a better deal than just buying an index fund?

The top performers included ExOne Co. (XONE - Nasdaq), a member of one of the hottest and most volatile groups of public companies: manufacturers of three-dimensional printers. The stock finished 2013 more than 20 per cent off its high, but it still logged a 236-per-cent gain from its February offering price.

Another star of 2013, QIWI PLC (QIWI - Nasdaq), gained only 8 cents from its $17 offering price on its debut day of trading in May. But the Russian online-payments company zoomed almost 228 per cent since, making it the single-best IPO when measured against the S&P 500's performance over the same period.

(If you are wondering, most of Twitter's big gain came on the first day; while the stock gained 145 per cent from its IPO date to year-end, investors who bought at the first-day close are up a mere 42 per cent.)

There were, of course, IPOs that fit the stereotype of all pop and no substance. Several had big first-day gains, but have fallen significantly from their first-day close.

The disappointments include several biopharmaceutical companies, such as Foundation Medicine Inc. (FMI - Nasdaq), which finished up 32 per cent from its offer price but down nearly 33 per cent from its first-day close and Veeva Systems (VEEV - NYSE), which shot up 61 per cent on its first day but then went on to finish down 14 per cent from its initial close.

All got "caught in the biopharma downdraft" that occurred when Prosensa Holding NV (RNA - Nasdaq), another newly public company, announced its muscular-dystrophy drug failed a late-stage clinical trial, says Francis Gaskins, an analyst who calls his service IPODesktop. "There were just too many companies out in that category in a short time period from last summer until mid-October or so." (Prosensa is the worst U.S. IPO of the year by any measure, down 64 per cent from its offering price and 76 per cent from its first-day close).

Another relative disappointment was sandwich chain Potbelly Corp. (PBPB - Nasdaq), which more than doubled on its first day of trading, but is now down more than 20 per cent from its first-day close.

Canada's IPO market isn't nearly as volatile. The biggest first-day "pop" came from Halogen Software Inc. (HGN - T), up a mere 15 per cent in its first trading session in May. Real estate investment trusts dominated the 18 debuts on the TSX, including the largest, the Loblaw-store spinoff Choice Properties REIT (CHP.UN - T).

Ski-doo maker BRP Inc. (DOO - TSX) is the best performer by all measures, up 40 per cent from its May offering price and more than 25 per cent from its first-day close; the TSX Composite is up just 6.6 per cent over the same period.

The Canadian Tire REIT, CT Real Estate Investment Trust (CRT.UN - T) has beaten the TSX Composite by 6.5 percentage points since its October debut. And the former Saskatchewan Crown corporation Information Services Corp. (ISV - T) is up 23 per cent from its offering price, although a first-day bump and a strong TSX Composite performance since its July debut mean that investors who bought at the first day's close haven't outperformed the market.

That's the good news. All told, just three of the 18 IPOs outperformed the TSX Composite from their first-day closing price; six have underperformed by double-digits. Agellan Commercial Real Estate (ACR.UN - T), Inovalis REIT (INO.UN - T) and WPT Industrial REIT (WIR.U - T) have all lost roughly 12 to 13 per cent from their debuts, and have underperformed the broader market by 19 to 24 per cent as a result. (Their healthy dividend yields – all in the range of 8 to 10 per cent – offset a fair amount of the loss in market price.)

Canada will never have the sheer volume of IPOs that the United States has. Nor will it have the wild fluctuations. It would be nice, however, if it had a few more impressive debuts. 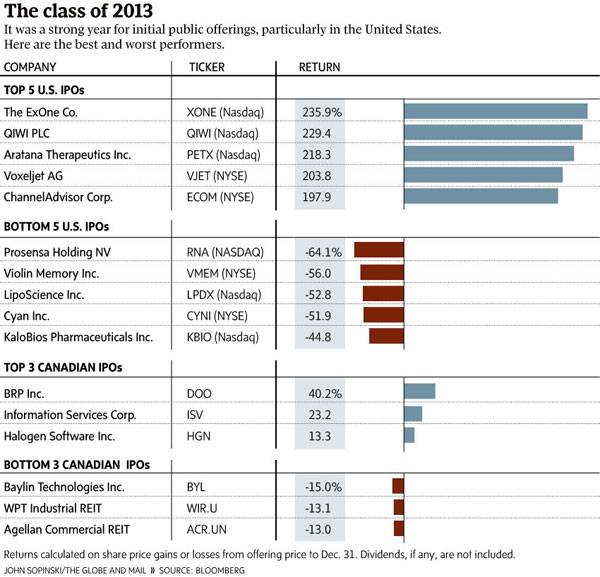 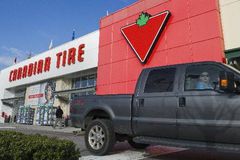 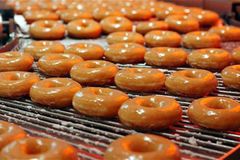