Investors in Davis + Henderson Corp. are reaping the rewards of its transition from a cheque-printing company to one that provides technology for a number of electronic banking transactions.

D+H stock hit an all-time high last week and has increased by about 35 per cent over the past year as the Toronto-based company boosts its business south of the border.

D+H has made a handful of acquisitions since 2011, but none as transformational as last year's $1.2-billion (U.S.) purchase of Florida-based Harland Financial Solutions, which has about 5,400 bank and credit union clients.

While some investors worry D+H shares are getting pricey at just under $30 (Canadian) per share, many believe the stock will continue to benefit from the U.S. economic recovery.

"We think there will be a lot more organic growth coming from this company in the next couple of years," said Paul Harris, partner and portfolio manager at Avenue Investment Management, which has owned the stock for its clients since 2009.

D+H also pays a juicy 4.5-per-cent dividend, bigger than most of the Canadian banks and about double the average of companies on the S&P/TSX composite index.

The company has been well known in Canada for its business printing cheques for the big banks. However, as more people turn to online banking, the company has moved into a wide range of electronic services such as opening of accounts, making payments and applying for loans. About a third of its current revenues come from the cheque business, down from about 43 per cent in 2012.

D+H is also growing through a number of acquisitions, particularly in the United States. That includes its 2011 purchase of Web-based mortgage company Mortgagebot LLC, followed by mortgage loan software company Avista Solutions Inc. in 2012, and last year, the portion of cloud-computing company Compushare Inc. that it did not already own, followed by the Harland deal.

The debt taken on as a result means dividend payments are unlikely to increase in the near future, analysts say.

Still, investors seem to like the company's growth strategy. The shares have increased 25 per cent since the latest deal was announced in July.

National Bank Financial analyst Trevor Johnson says the shares have had a great run but "can still probably go higher." He said the strengthening U.S. dollar should also be a "currency tailwind" for the company in the coming quarters, given that its earnings are based in Canadian dollars.

Mr. Johnson is one of three analysts with a "buy" on the company, while four recommend it as a "hold," according to Thomson Reuters I/B/E/S.

Bank of Nova Scotia analyst Phil Hardie downgraded D+H to a "hold" last week after the shares traded above his $29 price target, but he is still positive on the company.

"D+H appears to be striking an attractive balance for investors between yield, growth potential and recurring revenue," Mr. Hardie said in a recent note.

TD Securities analyst Graham Ryding has the highest price target among analysts of $33, as of Monday, and a "buy" on the stock, citing the company's growing exposure to the U.S. economic recovery.

He forecasts about 42 per cent of the company's revenue will come from the United States this year, and about half of its earnings before interest, taxes, depreciation and amortization (EBITDA).

"Given D+H's competitive suite of mortgage, lending compliance and core banking technology products, it is well positioned, in our view, to benefit from a potential recovery in banking technology investment," he said in a recent note.

One way analysts prefer to value D+H is by looking at its enterprise value – the market value of all its shares plus the company's net debt – in comparison to EBITDA.

It has an EV/EBITDA ratio of about 10, which is in line with some of its financial technology peers such as ACI Worldwide Inc. and High One Holdings Inc., according to S&P Capital IQ. It also appears inexpensive compared with Ellie Mae Inc. at 14 times, DealerTrack Technologies Inc. at 15 times and Bottomline Technologies Inc. at 21 times.

The smartphone way of depositing cheques
May 11, 2018 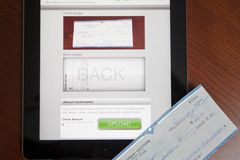 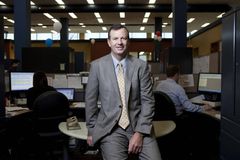 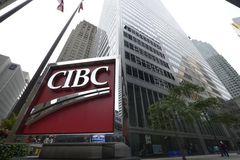