Even with commodities mired in the worst slump in a generation, Goldman Sachs Group Inc., Morgan Stanley and Citigroup Inc. are warning bulls that prices may stay lower for years.

Crude oil and copper are unlikely to rebound because of excess supplies, Goldman predicts, and Morgan Stanley forecasts that weaker currencies in producing countries will encourage robust output of raw materials sold for dollars, even during bear markets. Citigroup says the sluggish world economy makes it "hard to argue" that most prices have already bottomed.

The Bloomberg commodity index on Sept. 30 capped its worst quarterly loss since the depths of the recession in 2008. The economy in China, the biggest consumer of grains, energy and metals, is expanding at the slowest pace in two decades just as producers struggle to ease surpluses. Alcoa Inc., once a symbol of U.S. industrial might, plans to split itself in two, while Chesapeake Energy Corp. cut its work force by 15 per cent.

Caterpillar Inc. may shed 10,000 jobs as demand slows for mining and energy equipment.

"It would take a brave soul to wade in with both feet into commodities," Brian Barish, who helps oversee about $12.5-billion (U.S.) at Denver-based Cambiar Investors LLC. "There is far more capacity coming on than there is demand physically. And the only way that you fix the problem is to basically shut capacity in, and you do that by starving commodity producers for capital."

Investors are already bailing. Open interest in raw materials, which measures holdings of futures and options, fell for a fourth month in September, the longest streak since 2008, government data show.

U.S. exchange-traded products tracking metals, energy and agriculture saw net withdrawals of $467.8-million for the month, according to data compiled by Bloomberg.

The Bloomberg commodity index, a measure of returns for 22 components, is poised for a fifth straight annual loss, the longest slide since the data begins in 1991. It's a reversal from the previous decade, when booming growth across Asia fuelled a synchronized surge in prices, dubbed the commodity super cycle.

Farmers, miners and oil drillers expanded supplies, encouraged by prices that were at record highs in 2008. Now, that output is coming to the market just as global growth is slowing.

Over-investment in new supplies in the past decade and favourable growing conditions for crops caused gluts, Citigroup analysts led by Ed Morse, the global head of commodities research, said in a report Sept. 11. The bank is bearish on crude oil, aluminum, platinum, iron ore, cocoa and wheat in the next three to six months.

Investors need to brace for a "long winter," with the commodities bear market predicted to last for many years and oil dropping to as low as $35 (U.S.) a barrel, said Ruchir Sharma, who helps manage $25-billion as the head of emerging markets at Morgan Stanley Investment Management in New York.

Goldman Sachs has an even dimmer outlook. The odds are increasing that oil will slump near $20 because the market is more oversupplied than initially forecast, analysts led by Jeffrey Currie, the head of commodities research, said in a Sept. 11 report. Mr. Currie, in an interview days later, said prices could stay low for the next 15 years. The bank also forecasts that copper will remain in surplus through at least 2019 and fall 13 per cent to $4,500 a tonne by the end of next year.

Miners are already scaling back on spending, and extreme weather can cause surprise reductions in farm output.

Companies from Glencore PLC to Freeport-McMoRan Inc. are cutting metal output, and Royal Dutch Shell PLC announced it would abandon its drilling campaign in U.S. Arctic waters after spending $7-billion.

"Once you get to a certain price, you're going to lose a lot of the players," said Karyn Cavanaugh, a senior market strategist at Windsor, Conn.-based Voya Investment Management, which oversees $205-billion. "And at that point then, prices will go up."

U.S. crude-oil stockpiles remain almost 100 million barrels above the five-year average. Copper inventories tracked by the London Metal Exchange have more than doubled in the past 12 months, and the International Grains Council sees wheat reserves climbing to a record next year. 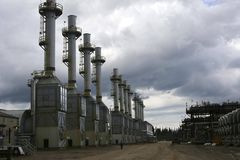