The beauty of technical analysis is that it is unbiased and impartial. The question is: Who pays attention to it?

For my part, I have been in the Bob Farrell camp from the first time we touched base over a decade ago when I joined Merrill Lynch Canada as chief Canadian economist and strategist. Bob was the dean of Merrill Lynch research for about five decades and still publishes today, and his latest missive, "Will April Flowers Bring May Flowers," really hit home with me. To wit:

"Huge gains in short time periods like this are not necessarily bullish. In fact, the biggest declines typically generate the biggest reflexive rallies (with retests to follow) … the duration of this largely uncorrected rally since March 9, 2009, is already in extreme territory and any extension from here should be watched for ending characteristics such as catching up of laggards and the development of sentiment extremes."

This has been a rally done on extremely low volume because nobody is selling. The marginal buyers have been the pig farmers, namely the in-house traders at the big banks who are selling to each other at ever-inflated prices as if they were all in a room at a Sotheby's auction. This is an assertion, but it makes perfect sense because the fund flow numbers do not add up to a 75-per-cent rally from the lows in the U.S. stock market, even including share buybacks. The nagging worry then is: What is the catalyst for the inevitable corrective phase? Very likely the answer will be related to sovereign credit risks.

Here is the way we look at the situation: it's about earnings and the variability around the earnings outlook. We are in a world where the government sector has been the primary provider of economic impetus and it is becoming clear that the tolerance among bond investors for more public sector largesse is growing thin. The future is more uncertain than normal coming out of a cycle that was in the grip of contracting credit and asset deflation.

As for the corporate earnings that have actually been accrued, we are talking about a $57 (U.S.) trailing four-quarter trend in S&P 500 operating earnings per share (EPS).

The last time the S&P 500 was rallying towards the 1,200 level in late 2004, the trend in EPS was $68, or 20 per cent higher than it is today, and back then, we had solid and sustained employment growth, low and falling unemployment rates and high and rising capacity utilization rates.

Not to mention that credit was abundant and available to everyone at an extremely low cost, housing and commercial real estate were rising to new heights, and household balance sheets and wealth were hitting new all-time highs.

So, no matter how we slice it, whether on a Shiller price-to-earnings basis, a one-year forward basis, a Tobin Q basis or a historical profit basis, the equity market in the U.S. is anywhere between 20 per cent and 30 per cent overvalued.

Nothing says it can't get more overvalued or that this overvalued state cannot linger for longer.

But reversion to the mean suggests that we will in fact, at some unknown point in the future, embark on the Farrell retest phase and its attendant share price declines.

Now, wouldn't it make more sense to buy on that opportunity than after a 75-per-cent virtually non-stop rally?

This is not a time to be tempestuous and impatient. More than ever, it is a time to be exercise discipline and not to be tempted into chasing performance. 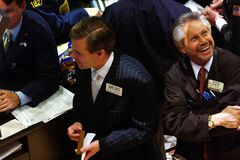