The summer movie season is winding down, with its usual dose of car chases, high-decibel explosions, and an endless series of sequels. Think Iron Man 2, Toy Story 3, and Shrek Forever After.

But "sequel mania" also may be creeping into the more sedate world of financial journalism.

Remember "The Death of Equities," Business Week's seminal August 13, 1979 cover story? It claimed that investors, burned by years of poor returns in the 1970s, had abandoned stocks for good.

Well, on August 22, The New York Times published what may as well have been entitled "The Death of Equities II."

In the right-hand column of the print edition's front page-the newspaper's equivalent to a magazine cover-was an article headlined: "In Striking Shift, Investors Flee Stock Market."

The subject was pretty familiar to users of MoneyShow.com and other investing and financial sites: Americans have pulled billions of dollars from domestic stock funds and poured them into bond funds at a record pace.

While not as sweeping-or categorical-as the 1979 Business Week piece, the Times article also captured a mood of deepening pessimism among investors.

Today, the Business Week cover is remembered as a sign that investors had "thrown in the towel"-the capitulation that signals the end of a bear market.

Almost three years to the day after that cover story ran, the spectacular bull market of the 1980s took off. Will the Times piece have a similar legacy? Who knows? But there are striking parallels.

The most obvious difference, of course, was that the Business Week article came after nearly a decade of rising inflation, while we have lived through a series of financial bubbles and a massive asset deflation. But the meme that investors were abandoning stocks is eerily similar.

Here's how the Times story begins:

"The notion that stocks tend to be safe and profitable investments over time," it continued later, "seems to have been dented in much the same way that a decline in home values and in job stability the last few years has altered Americans' sense of financial security. "

"At least seven million shareholders have defected from the stock market since 1970, leaving equities more than ever the province of giant institutional investors."

"Further, this 'death of equity' can no longer be seen as something a stock market rally-however strong-will check," it went on. "It has persisted for more than ten years through market rallies, business cycles, recession, recoveries, and booms."

Experts quoted in both articles said it would be hard to change investors' minds.

"Loren Fox, a senior analyst at Strategic Insight, [told the Times] 'People are not going to rush toward the stock market on a sustained basis until they feel more confident of employment growth and the sustainability of the economic recovery.'"

Back in 1979, David Silver, president of the Investment Company Institute, opined: "'It would take a sustained bull market for a couple of years to attract broad-based investor interest and restore confidence.'"

"The appetite for stock market risk among American investors of all ages has been declining steadily since it peaked around 2001, and the change is most pronounced in the under-35 age group," The Times reported.

"Younger investors, in particular, are avoiding stocks," Business Week wrote. "Only the elderly who have not understood the changes in the nation's financial markets, or who are unable to adjust to them, are sticking with stocks."

Of course, those "younger investors" were the baby boomers who would ride the bull market until the bitter end last decade.

Another common theme: Investors were looking for less risky places to put their money after a long bear market.

Here's "The Death of Equities":

"...For more than ten years, the largest returns have come from taking the fewest risks. Indeed, by constantly rolling over short-term paper, investors have beaten returns on stocks and bonds by a considerable margin.

"As investors pulled billions out of stocks, they plowed $185.31 billion into bond mutual funds in the first seven months of this year... "

"Charles Biderman, chief executive of TrimTabs, a funds researcher, said it was no wonder people were putting their money in bonds given the dismal performance of equities over the past decade."

The trends both stories described were real, and their prominent placement on the cover of a major business magazine and the front page of a general-interest national newspaper reflected the editors' judgment that they were of great interest to a large audience.

At some point, a trend is so widely embraced it becomes the conventional wisdom. That's why people like Bernie Schaeffer and James Stack use headlines and magazine covers as contrary indicators.

In an email, Lawrence Ingrassia, the Times's business and financial editor, said the article "noted that it won't be clear for some time whether this is a long-term trend." Full disclosure: I had some discussions about writing for the Times a few years ago, but nothing came of it.

Right now, the bear market looks as if it will stick around for a while, with high unemployment, a fragile housing market, snowballing government debt, and massive de-leveraging-plus an Obama administration which just can't get in front of the economic mess.

But in 1979, the problems seemed intractable, too. The Iranian hostage crisis and the Soviet invasion of Afghanistan had sapped our morale. Inflation was out of control, and the nation was adrift under President Jimmy Carter's feckless leadership.

But the very same month "The Death of Equities" ran, Carter appointee Paul Volcker was sworn in as chairman of the Federal Reserve. Volcker ultimately wrung inflation out of the system, and the election of Ronald Reagan in 1980 and the natural workings of the business cycle did the rest.

The Dow Jones Industrial Average was around 830 when "The Death of Equities" appeared. The story was "correct" for another three years, when the Dow closed below 777 on August 12, 1982. That was the beginning of the mega-bull that ultimately topped out above Dow 11,000 in 2000. (The subsequent cyclical bull market surpassed 14,000 in 2007.)

Will it happen again this time? We don't see a catalyst now, but we didn't back then, either.

And as technical analyst John Bollinger wrote this week: "...The stock market entered a sideways consolidation phase in the middle of 1998. The expected length of this consolidation is 16 years...We have just finished year 12 and are now three-quarters of the way through...."

"By the time everybody is out of risky stocks and other risky assets and into 'safe' bonds, it'll be time for another massive shellacking. "

"The final irony is that having finally been completely crushed, [investors] will ignore salvation-a new bull market in stocks-when it arrives."

Is there a new bull market ahead? Who knows? But articles like the front-page story in last Sunday's Times are one sign we may be much closer to the end of this long bear than to the beginning. 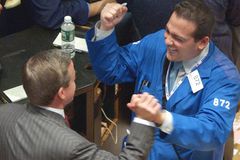 This recovery crawls: UBS
August 31, 2010
Follow us on Twitter @globeinvestor Opens in a new window
Report an error