I would really appreciate your opinion on Zenyatta Ventures. I think it is now undervalued but what do I know. I'm only a senior, senior. LOL!

Please send me your opinion on this stock.

Thanks for the assignment. This will be the second time since 2013 that I inspect the charts for Zenyatta Ventures Ltd. ( ZEN TSXV). The last time was in November 2013 when the shares were trading for $3.03. Gavin wanted my thoughts on the stock and the research conducted identified ZEN as a speculative investment.

The shares peaked near $5.00 in July of 2013 where the MACD and the RSI generated sell signals. ZEN retreated to $2.00 by October of 2013 where it caught a bounce to resistance at $3.50. At the time the stock was testing support at $3.00 and it was advised that if he was so inclined that the best approach was to average into the stock slowly and not jump in with both feet.

Another examination of the charts for ZEN will inform my opinion on how to manage this graphite deposit. 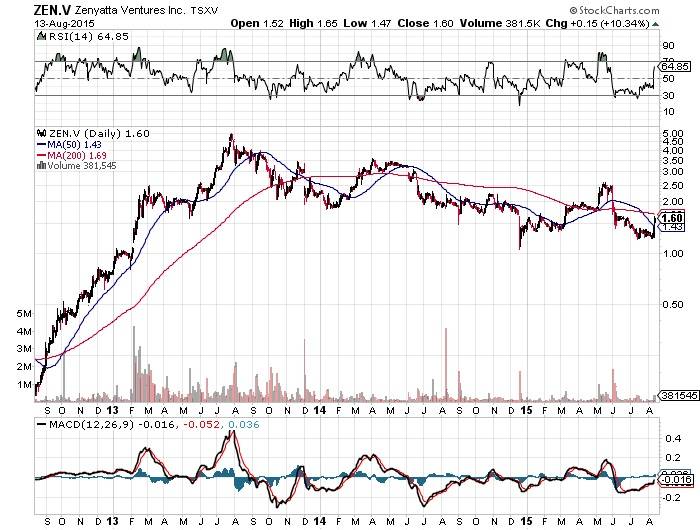 The three- year chart exposes a gently sloping decline line that started as the shares moved off the July 2013 high. There have been opportunities to trade the shares for profit over the last two years if that fits your investor profile. There was a nice move up from early March of 2015 through May that produced a healthy gain.

Since the 52-week high at $2.61 in May of 2015 ZEN has pulled back and a recent attempt to move higher has met resistance near the 200-day moving average. We also need to make note of the death cross that surfaced in July and how that might influence the direction of the shares. 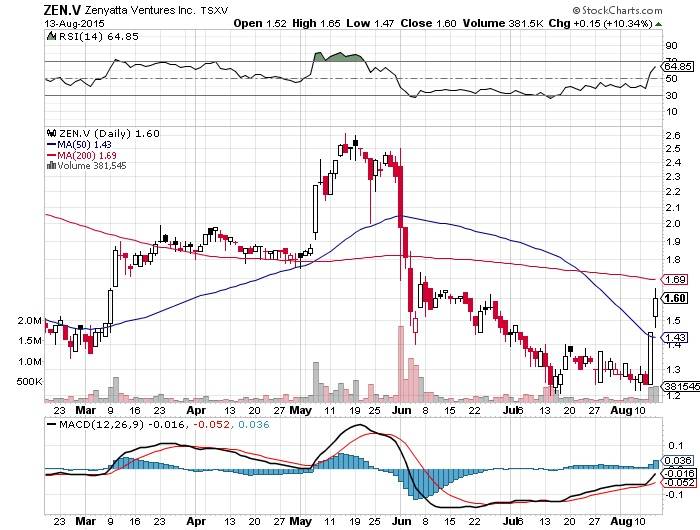 The six-month chart exhibits the sell signals generated by the MACD and the RSI in May as the stock became overbought. The spike in August came on higher than average volume but only for a couple of days and not significantly more robust buying. The average daily volume over the last three months is 156,453. The volume on August 12 and 13 was 265,500 and 288,100 respectively. It's always good to see more buying come into a stock but it needs to be sustained longer than two days to reverse a trend.

As posited in my previous analysis ZEN has to be views as a speculative stock. They have a deposit but have not moved to mining it.

Next time I will take another run at the charts for Teck Resources Ltd. (TCK.B TSX) for Bill.

Have your own question for Lou? Send it to lou@happycapitalism.com.