Brock Penner has heard all of the knocks against condo living: the small space, monthly maintenance fees and extra levies, neighbour noise and various rules and bylaws that don't apply when owning a house.

Still, he loves it, and not just because it's all he can afford right now in Vancouver. There's also the convenience and close proximity to his job downtown.

"I would absolutely love a house with a yard. That being said, I also love living downtown. That trumps a house with a yard," says Mr. Penner, 37. "If all I can afford is a condo, that's my decision. I would rather live in a one-and-a-half bedroom condo downtown than a three-bedroom house in the suburbs."

Mr. Penner is like many millennials who don't want to rent, or what he describes as "paying other peoples' mortgages," and are choosing to buy condos instead of houses, either by choice, or financial necessity.

Look for fees, past present and future

But for those who haven't lived in a condo before, the costs and lifestyle can be an eye-opener. While condos have many of the same fees as homes, such as insurance, taxes and utilities, owners must also pay hundreds of dollars in monthly condo fees, which can rise regularly to help pay for continuing maintenance.

While some see paying the monthly fees as not much different than paying the costs of maintaining a house, others look at them as extra mortgage payments.

Condo owners can also be hit with levies valued at hundreds or even thousands of dollars each for major repairs not covered in the building's budget. Mr. Penner has paid a few in the past.

He says people looking to buy a condo should scour through old minutes of meetings held by condo corporation boards, (or councils as they're known in B.C.) and get in touch with members to find out what extra costs might be coming up.

"I pored through years of condo documents," Mr. Penner recalls from when he bought his first condo in an older building in Toronto at age 27, and then his most recent one in Vancouver, which he bought five years later and then sold earlier this year. He is now renting while waiting for a condo he bought during preconstruction to be ready, likely some time in the spring of 2017.

He recommends that buyers of resale condos look at the budget, major costs in the past, how much money is in the reserve fund, and what the plans are for keeping the building maintained.

"You also want to look for a proactive board," he says. "Make sure they're a group of people who are looking after the long-term heath and maintenance of the building."

You can't do that in a condo

Another adjustment for some people new to condos is the number of rules and bylaws on everything from window coverings to what can go on your deck or the size and number of pets that can live with you. Rules can also change even after you've owned the unit for several years, warns Hootie Johnston, a buyer's agent at Royal LePage Westside in Vancouver.

For example, a condo may impose a smoking ban on decks, or inside individual units, which wasn't in place before.

"Condo life is community living," says Mr. Johnston. "You are bound to a lot of different things."

He recommends condo owners, especially newer ones, attend the condo board's annual meeting and regularly read the meeting minutes to stay on top of what changes, including fees increases, may be on the horizon.

Noise can also be an issues for people living in such close quarters. It's the worst part of condo living for Jessica Squibb, 29, who own a 580-square-foot unit in downtown Toronto.

"I don't like the noise," she says. "We've had some bad renters who don't care and will party into the wee hours of the morning on a Tuesday night when the rest of us are trying to sleep."

There are also more families with young children living in condos, because they're more affordable than a house, which can mean crying or screaming children at various hours.

Another drawback can be when you need to replace a bathroom fan, heater or have new floor put in the unit. Most building require owners to use their preferred suppliers, or a certified professional, who can cost more than if you did it yourself or hired a handy person you know.

Still, Ms. Squibb is a big fan of condo life in general.

"They are so easy. I can go on a trip and don't have to worry about putting the lights on an automatic timer or a pipe bursting when I'm not home," says Ms. Squibb, who first bought a 435-square foot condo in Toronto about six years ago. She sold it three years ago to live in her current place.

She also doesn't mind paying maintenance fees, especially since it means someone else is handling the building upkeep and repairs.

Ms. Squibb and her boyfriend are looking to eventually buy a townhouse with more space to accommodate a family in the future.

"I would live in a condo for my whole life, except the maintenance fees on a larger unit are just too high," she says.

For now though, Ms. Squibb is staying put in her condo, hoping Toronto's hot housing market will cool off – at least to the point where she doesn't have to bid tens of thousands of dollars over asking to get a place she wants.

"I'm not willing to get into those fights just to get into a bigger space. I don't care about it that much." 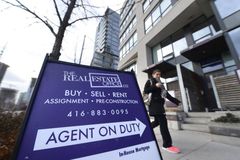 Does it make more financial sense to own a condo or rent an apartment?
January 13, 2014
Follow Brenda Bouw on Twitter @BrendaBouw
Report an error Editorial code of conduct
Due to technical reasons, we have temporarily removed commenting from our articles. We hope to have this fixed soon. Thank you for your patience. If you are looking to give feedback on our new site, please send it along to feedback@globeandmail.com. If you want to write a letter to the editor, please forward to letters@globeandmail.com.
Comments