Building Blocks is a special personal finance web series geared towards educating families on money-related topics. A collection of stories, videos and discussions, Building Blocks will run online until the end of December.

Heather McQueen and her husband will spend part of Christmas Day on an airplane. The Vancouver couple, who began hammering out their holiday budget back in September, knew travelling to visit family in Winnipeg and Kamloops would be one of their biggest expenses.

"We are flying out on the night of Dec. 25th because that is when the cheapest ticket was," said Ms. McQueen, a 33-year-old project manager. "We didn't cut anything out, but we hunted around for seat sales. We didn't want to have that after-Christmas regret."

Although setting up a family budget to oversee holiday spending and set other short and long-term financial goals seems like a no-brainer, few Canadians are as organized as Ms. McQueen.

"People might assume they will spend $1,000 or $2,000 for Christmas. But unless they started setting aside that money earlier in the year, it tends to go on the Visas or Mastercards," said Daniel Collison, a regional director for Investors Group in Markham. "Because of interest rate charges, the reality is that people will be paying more for their holidays and presents than the original ticket price."

Financial planners agree that year-round budgeting is key to weathering cash-flow calamities. A budget is the basis for a strong financial foundation that allows families to buy homes, save for retirement, and survive mishaps such as an unexpected job loss.

Flush from spending, bogged down with record debt and reeling from stock market turmoil, many Canadians will be entering 2010 with a stinging financial hangover. Historically-low borrowing costs have sent housing price through the roof and many people, particularly young families, are now shouldering staggering amounts of real estate debt. Which makes drawing up a family budget more critical than ever.

When interest rates rise from their current lows, anyone with debt - be it a mortgage, car loan or credit card - will be in for a rude wake-up call, Mr. Collison said. "It doesn't take a significant increase in rates to cost you a few hundred dollars more in payments each month. Now is the time for people do a cash-flow analysis, so they can understand what kind of buffer they are playing with when interest rate changes kick in."

A family budget should also take into account potential family emergencies, such as one spouse losing their job, says Suzanne Schultz, a chartered accountant and certified financial planner with RBC Dominion Securities Inc. "A budget is key because it gets a family thinking about their future financial goals and what you would do in case something unforeseen happens."

She says the best way to get started is to go back and track all family spending for the last six months. Bank statements, credit card bills, and cash withdrawals should be accounted for and divided into mortgage, utilities, transportation, food, entertainment, clothing, debt repayment, savings and perhaps other special categories, such as childcare or charitable donations.

The next step is determining what is a fixed and what is a variable expense, which areas are being neglected and which need to be curbed. "You want to make sure that you are setting aside enough money to meet your financial goals and not just blowing it on general spending," Ms. Schultz said. The introduction of the tax-free savings account, as well as the temporary Home Renovation Tax Credit, has given young couples more options to choose from.

Research suggests young Canadians are saving less than their parents and grandparents did at the same age, citing debt as their biggest obstacle. A TD Canada Trust survey released in September also found that women were better at sticking to a budget than men, and that 80 per cent of people polled found saving money "too hard."

One way to make saving easier is to set up automatic bill payments and to divert some money from each paycheque directly into a savings account. Ms. McQueen employs that tactic with her company's stock purchase plan and her yearly bonus, which she rolls directly into an RRSP. "I never see that money or think about it as my cash available for spending so it ends up being like a forced saving program."

Gail Vaz-Oxlade, host of television show Til Debt Do Us Part and the author of Debt-Free Forever, says once couples know how much they make and how much they spend, they can decide actively - not passively - where their money is going.

"If you don't have a budget, you are not in control. You are always just responding to the balance in your account," she said.

Of course, setting up a budget is only the first step to getting a handle on the family finances. Using a pen and paper, a simple spreadsheet or a software package, couples need to track their spending and measure their progress on a bi-weekly or monthly basis. If having a credit card is too tempting, they could decide to live off cash. It could mean that while they are chipping away at their high-interest debt, they will need to slash their entertainment or shopping allowance.

"This whole money-management thing, this living within your means, is very simple but very hard," Ms. Vaz-Oxlade said.

Certified financial planner Scott Plaskett says couples in their 20s and 30s are often overwhelmed by the amount of financial choices out there. "The problem with this age group is that they have too many questions and not enough time to find out the answers."

But setting up a budget can give people the security of knowing their immediate expenses, as well as that their short and long-term goals are covered, says Mr. Plaskett, the chief executive officer of Ironshield Financial Planning.

"Once they have planed for all that, I tell people they can go ahead and spend the rest, to enjoy themselves. If you have planned for your future, it is okay to live for today."

Useful budgeting tools: For a look at Gail Vaz-Oxlade's guide to building a budget and her budget worksheet, click here. Wrestle down that debt while you can
December 16, 2009 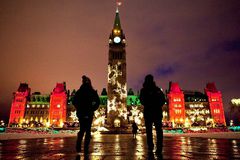 10 ways to avoid holiday overspending
December 16, 2009
Follow Roma Luciw on Twitter @https://twitter.com/RomaLuciw
Report an error
Due to technical reasons, we have temporarily removed commenting from our articles. We hope to have this fixed soon. Thank you for your patience. If you are looking to give feedback on our new site, please send it along to feedback@globeandmail.com. If you want to write a letter to the editor, please forward to letters@globeandmail.com.
Comments