A soft economy and heated competition are eating away at major fast-food chains.

Fast-food chains have long proven resilient to the slow economy as consumers allow themselves a low-cost indulgence. Now, after years of scant growth and weak job creation, customers are pulling back spending. The trend is putting pressure on restaurant chains such as Tim Hortons and McDonald's and forcing them to offer more deals.

Tim Hortons said Thursday its third-quarter same-stores sales rose just 1.9 per cent in Canada, from 4.7 per cent a year earlier, and just 2.3 per cent in the United States, from 6.3 per cent last year.

"Our growth rates were below those we have typically delivered in recent years," Tim Hortons chief executive officer Paul House told analysts. "Moderate growth was seen across many of our peers in the North American restaurant industry … reflecting sluggish economic recovery and fragile consumer confidence. … We are not standing still. We are pursuing several initiatives to adapt to the circumstances."

The tight market, nevertheless, isn't spread evenly, underlining the widening gap between chains that cater to middle-income earners and those that serve the well-off: Even as Tim Hortons struggles to make gains, higher-priced Starbucks Corp. enjoyed a strong quarter in its latest period.

"It's the guys in the middle who are getting squeezed," said Derek Dley, an analyst at Cannacord Genuity.

In the middle ground, Tim Hortons and McDonald's are battling over coffee customers, with McDonald's offering free java for a week at a time while Tim Hortons slashes prices of individual items. They're adding new menu items, such as panini sandwiches at Tim Hortons, and opening more restaurants.

The aggressive tactics have helped McDonald's in Canada, where it still enjoyed a sales lift in October in contrast to its other markets, including the U.S., the company said.

Still, "we continue to face pressure on both the top and bottom lines, some of which is the result of planned strategic decisions," McDonald's CEO Don Thompson told a conference call last month. "But other pressures have been driven by the external environment, including declining consumer sentiment, high commodity and labour costs and heightened competitive activity. When the economic crisis began in 2008, few people thought the environment would still be as uncertain and fragile as it is today."

Starbucks, for its part, last week raised its profit forecast for the fiscal year after quarterly sales in its top market – the U.S. – beat targets, providing optimism that was missing at other rivals.

Tim Hortons' year-to-date same-store sales picked up 2.9 per cent in Canada,  below the company's full-year target of 3 to 5 per cent, chief financial officer Cynthia Devine said.

Traffic to its stores dropped, although customers spent more at each visit as the company added bigger-ticket items like panini sandwiches to its menu and offered deals on other items. "We need to be prepared to adjust the way we do things in response to both the economic and competitive pressures that we are facing," Ms. Devine said. "We are confident that we are up to this challenge."

Tim Hortons is adding more stores and double drive-through lanes to help relieve long lineups. A recent study on fast-food drive-throughs by Gad Allon estimated that every seven-second reduction in service time results in a 1 per cent average sales increase.

Phillip Huang, an analyst at UBS Investment Resarch, said in a recent report that Tim Hortons, despite improvements over the years, "still has significant room to ease capacity contstraints and retain 'look and leave' customers during peak hours."

Mr. House acknowledged that Tims' grapples with jammed stores, which can end up in some would-be customers leaving. "It is a nice problem to have and it is a problem we have got to fix." 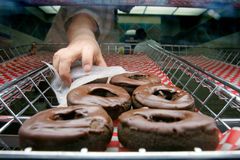 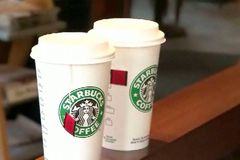 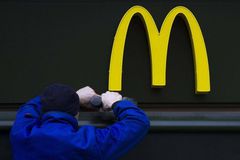