Wedding season is here and it’s not just the bride and groom who are brimming with emotions. Tell us about an experience as a wedding guest that tested or transformed you. Send submissions to facts@globeandmail.com by April 28.

On our last Norooz together, my father gave me a $100 bill. He was in a hospital bed in my parents’ family room in Tehran. I’d never thought of him as someone horizontal. He was always tall and straight, a suit-and-tie man, the kind you’d notice at a party and perhaps whisper to the person beside you about his distinguished bearing. Then he would speak, and his words mesmerized and intimidated you, daring you to release a loud breath and interrupt.

But there he lay, a month and a half after a stroke interrupted a speech he was delivering – a stroke whose severity and complications he conveyed to my mother moments before he lost the ability to communicate and fell into a coma for a month; before errant blood rushed around his skull, put pressure on his brain and threatened his ever waking up. He did wake up, though, and so for a second time since the stroke I had dashed from New Jersey to Tehran to spend the Persian new year with him and my mother.

Norooz, which marks the beginning of spring and starts precisely at the vernal equinox, took place at 9:55 p.m. Tehran time in 2006. My mother and I sat across from my dad. Frail and slightly paralyzed, he gripped the rails of the metal bed and tried to lift his upper body. He vowed to get better. He’d do it for me, he said, because I still needed a father.

When the exact moment of spring arrived, the three of us embraced. As at the start of every calendar year, we had a sense of newly discovered hope, though that year we needed it most. My father handed me his eidi – the gift elders give younger folks at the new year – the $100 bill. A few days later, I left my father to cross the ocean again. Back in my Jersey condo, I placed the bill within the pages of an expired passport in a drawer. The next time I went back to Tehran was in June, for his funeral. 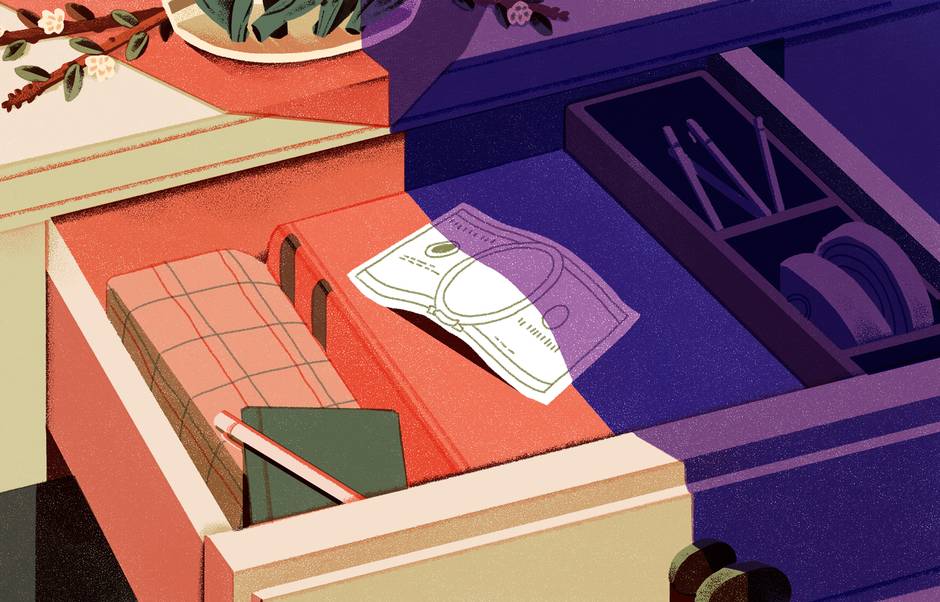 (Jeannie Phan for the Globe and Mail)

Ordinarily, when someone gives you money, it’s a means to purchase an item or service. But when the money is a person’s last token it becomes the gift itself. When I returned from Iran, I struggled with how best to use the bill. On one hand, I wanted to buy something that would remind me of my father – like the tomato-red sandals I had long admired in a Manhattan store. On the other, I couldn’t bear to part with what was really just a piece of paper, but also a keepsake.

In the months that followed, I was consumed with his death. In my dreams I begged the powers, whoever they were, not to take him from me. I’d wake up hoping it was just a dream but would realize the dream was my reality. There were small moments when I’d forget and manage to steal an instant of joy under a hot shower or in a glimpse of an early-summer flower. Otherwise, everything was darkened by my father’s death.

The idea of the red sandals was one of those small things that brought a glimmer of colour to my days. When I thought of them, I imagined a happiness that could exist in the future. And if I turned the money into an object, I could do justice to his gift. The problem was letting go – a dilemma that rendered the bill both valueless and precious at the same time.

Weeks later, my mother told me over the phone that she’d found a way to communicate with my father – through a medium. “Ask him anything you want without revealing the question to anyone,” she said. “This woman will get you an answer.”

Despite my logical reasoning, a quality I’d inherited from my father, I didn’t question her further because when you’re struggling to make sense of loss, you’ll clutch at any life preserver. I stood in my bedroom, closed my eyes and tried to send all my energy toward the skies, silently asking my dad if I should buy the red sandals with the money. I didn’t tell anyone; maybe I was ashamed that instead of asking where he was, if he was okay or if he was upset I’d missed his final moments, I had asked about shoes. Or maybe I wanted to test the medium.

Weeks later, my mother called with an answer: “Your father says, do whatever you like.” The reply lacked any particulars to verify that he, rather than the medium, was the one responding. Still, I trusted it – to reach the shore of the living, I needed to believe he was somewhere, saying something.

Off I went, $100 bill in wallet, to the shoe store. I handed the soft, shiny sandals to the cashier, chatting, trying to delay the transaction. When he finally rung up my purchase, I reached for the bill – but instead grabbed a credit card with my cold hands. The sandals were too pricey, but I paid for them and still consider them to be my father’s gift.

The $100 bill went back inside the drawer and has stayed there ever since. Once or twice I thought of a worthy cause for the money, but each time I reached for a credit card or an ATM instead.

This year marks 10 springs since my father gave me the bill and 10 summers since I began wearing the sandals. I’ve resigned myself to keeping the money for as long as life is kind enough to let me, and I’ll repair the sandals as long as cobblers humour me.

Perhaps my father knew the money would become a source of both dilemma and hope, leaving me with something trivial to struggle with but also a seed for a sunnier future after he was gone. But if he were here, he might say it was just my way of coping.