I am a mourner. A stranger in a strange land, with a blurry map and a tattered phrase book.

When my father passed away, early on a quiet, sunny June day, I suddenly became a Mourner. A new persona, a darkened mirror image of The Daughter.

Judaism has been here before, of course. In the past few months, I have learned more about the rules, regulations and customs than I ever knew, or wanted to. And yet there is safety in having a guidebook, annotated over hundreds of years by wise and learned observers.

These ancient rules and regulations serve as boundaries to surround me – and I have come to realize that these structures are there to support, not oppress me. When I falter, I have them to lean on. When I stumble, I notice that someone before me has left crumbs and clues, though I can’t always decipher or even recognize them at first.

My father, a Holocaust survivor, insisted that his children have a Jewish education in this New World so far removed from the shtetl. I am so grateful to my parents for this gift of identity and to the teachers who imparted to me the million details. Their commitment has continued to provide me with signposts at the beautiful lookout points and discreet illumination through the dark places.

My father was blessed in those final hours to wind down like a grandfather clock, his rhythm slowing into peace. In those first moments and hours, our family went through all those practical motions one must go through, the prescribed physical steps giving us handles with which to carry the overwhelming grief. Devastated, on automatic pilot, we put one foot in front of the other by stepping on the footmarks set out for us, watching for the next one, not raising our eyes.

It was hearing myself recite the Mourners’ Kaddish at the cemetery that broke my days-long trance. Suddenly I became aware of, and understood, my place in the universe. The Daughter. The Mourner. The Keeper of My Father’s Presence. 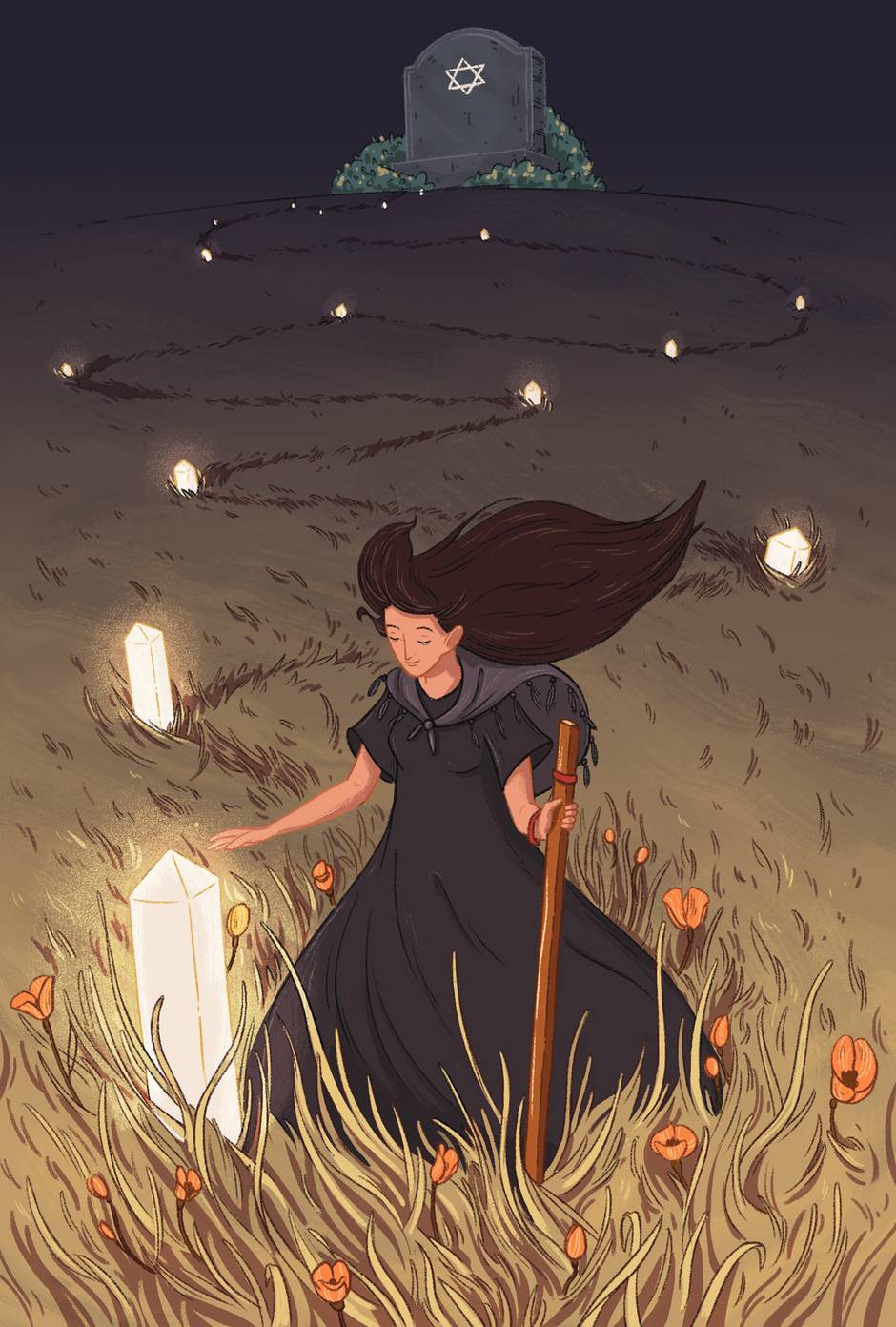 The shiva period of focused support acknowledged my incapability of living in the world I had been part of until yesterday and sheltered me from it. For seven days, prayer services came to us; kind friends and capable family members ensured that meals showed up and were set out, served and cleared. People dropped in, hugged, shared stories. My mother, brother and I existed in a survival-mode cocoon, separately, together. And after a symbolic walk out of the house, into the community, we officially began to ease back into life.

I vowed to continue reciting Kaddish for the year I am officially in mourning. It wasn’t really a decision, but rather an instinct. It’s one of those clear points on that blurry map and I clung to it for dear life. Every single day I have found a minyan, a quorum – a symbolic and de facto community that supports me in my declaration that this year, this is who I am, and this is where I belong. Every day, my world pauses for half an hour while I duck into services. I have recited Kaddish in synagogues of differing denominations, in other cities, in our local park with the synagogue baseball team. Saying Kaddish is not traditionally an obligation for women and while there is no prohibition from doing so, it is not customary. I have been met with curiosity, vague dismay, encouragement, admiration.

Most surprising to me is my own determination. Inherently shy, I have found my backbone, or perhaps that unbreakable bond to my beloved father. In order to say Kaddish, one needs a quorum of 10, and there have been days where this was in peril.

One regular at my usual synagogue once spoke of being in a restaurant, and noticing a man peer in and scan the crowd. “He’s looking for a minyan,” my friend understood, and got up to participate. “How did you know?” his son asked when he returned. “There’s a look,” he said. “You just know.”

I have shown up to a synagogue, late for daily service but just as a (stranger’s) wedding was about to take place; to a local ballpark; to a Sabbath afternoon in New Jersey; to a jiu-jitsu class in the shul basement. “Please,” I’ve asked. “We need a 10th.” I’ve never been disappointed. I have that look.

This year, as per Jewish law, I do not attend parties. Well-meaning friends and relatives have tried to make exceptions for me, thinking that they are being helpful when they suggest loopholes through which I could participate. A common one is “your Dad wouldn’t want you to be left out. He’d want you to be happy.”

Of course he would, more than anything in the world. But this is not about being happy. It’s about being protected. My joy in your happiness is sincere, but not all-encompassing. There is a dark hollow within me, and I don’t want to neglect it, ignore it or bring it to your celebration. I want to give it the respect it deserves. I don’t want to share it. Yes, I will miss out on some fine times, but I will never again have this unique opportunity to contemplate all I have lost, to discern what I will always have, where that leaves me, who I am and where do I go from here.

When I stand up, every day, and recite those timeless words “Yitgadal v’yitkadash,” I am not only asserting my place in the community. I’m holding Dad’s.