Skip to main content
Lisa Mesbur
Special to The Globe and Mail
Published May 1, 2015

In a market awash with Marimekko tablecloths and runway collections flaunting street-artist-designed fabrics (not to mention Impressionist umbrellas, Mona Lisa shower curtains and Basquiat tees), it’s hard to believe that until the early 20th century, fine art and fabric were entirely separate entities.

The merging of the two – and the products of the early fertile collaborations between artists and manufacturers – is the subject of the Textile Museum of Canada’s upcoming exhibition Artist Textiles: From Picasso to Warhol. Curated by British collectors Geoffrey Rayner and Richard Chamberlain, the exhibition features a rarely seen selection of more than 200 printed textiles designed by some of the 20th century’s preeminent artists, all manufactured during a period in which the boundaries between art, commerce and everyday life began to blur.

“In the States and in Europe, and in England in particular, it was just in the air. It was the whole idea of art in daily life,” says Sarah Quinton, curatorial director of the Textile Museum of Canada. “Artists were saying, ‘You know what? We want our work to be accessible. We understand that textiles and daily life are really important and really valuable … so yeah, let’s partner.’ ” 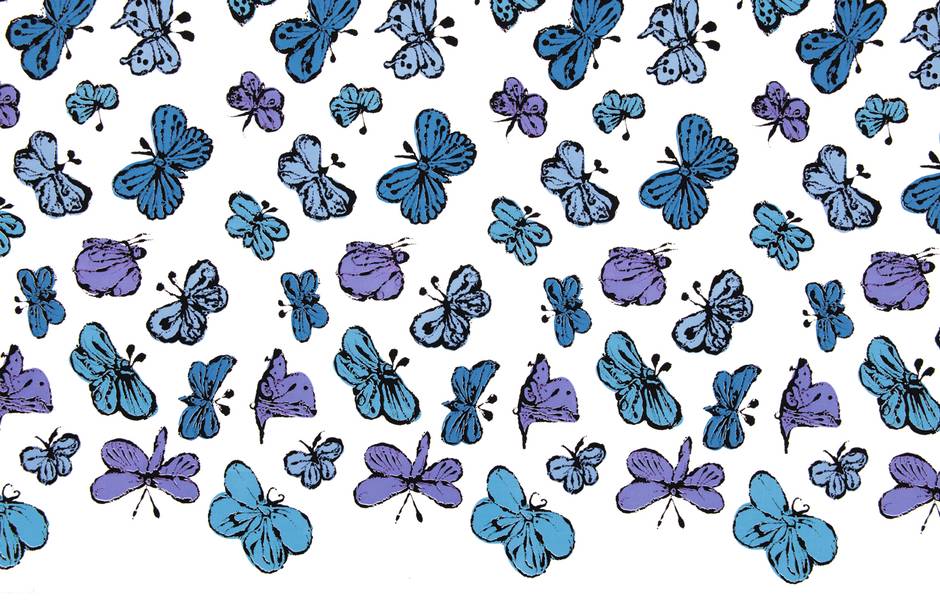 Unlike the licensed, already-famous artworks that appear today on fabrics and home decor, the artists represented in Artist Textiles created unique designs especially for use on fabrics. “These artists designed for textiles,” Quinton notes. “They’re not designs that existed already and were then transposed and adapted. They were thinking of the scale of the motif on their garment as it might relate to a drapery or to a woman’s dress. They had those considerations in mind.”

The resulting printed fabrics reflect not only the major art movements of the 20th century but also hint at the artists’ sometimes complicated relationship with a decidedly commercial medium.

Quinton points out Andy Warhol’s 1955 Happy Bug Day, a cheery bi-colour butterfly print presented in two colourways. It’s straightforward, appealing and very marketable. “Warhol started out as an illustrator. He was a commercial artist,” she emphasizes. “He understood scale; he understood colourways. He did a watermelon print; he did ice cream cones and big, fat Philadelphiastyle pretzels that are put into beautiful repeat. He began to play more and more with that idea of commerce and originality – the ironies crept into his artistic output pretty early on. But it didn’t stop him from producing commodity, basically.” 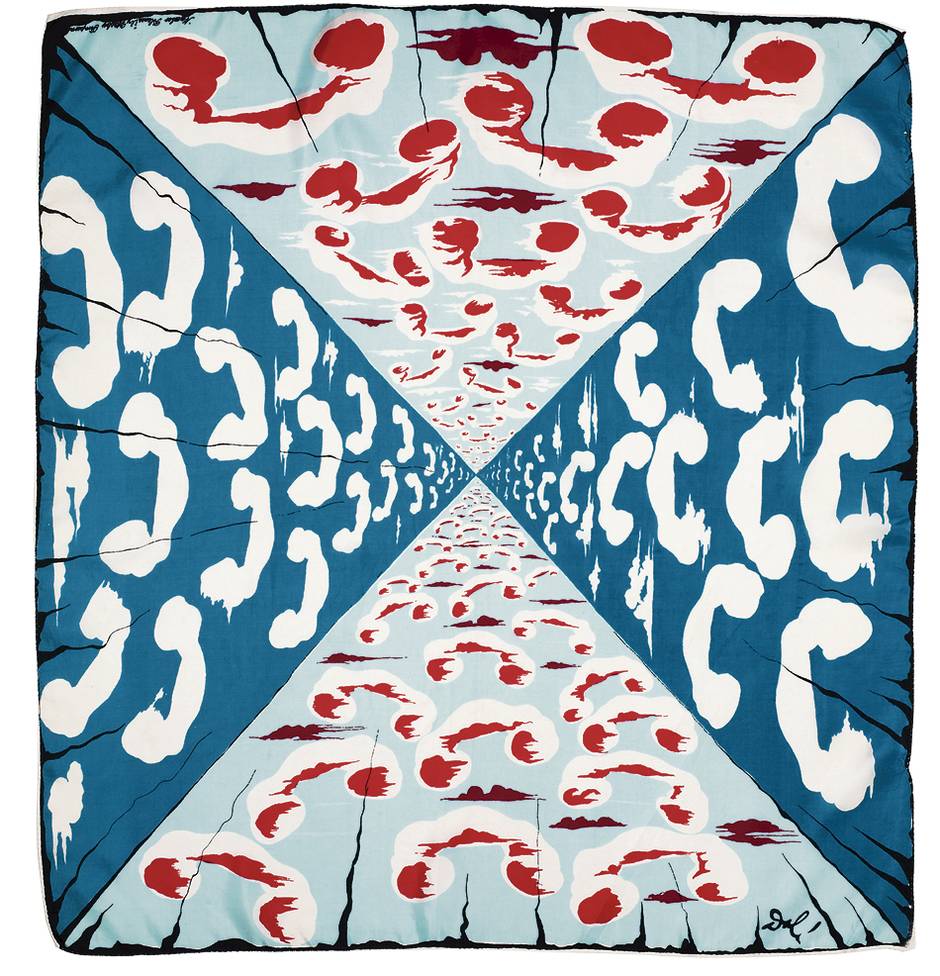 Picasso’s 1963 Toros y Toreros, a drapery design based on the painter’s bullfighting series, playfully captures his subjects in splashes of primary colour interspersed with evocative black silhouettes. “He’s adapted [the paintings] so beautifully to put into repeat with a very light and watercolour-y touch,” Quinton says. “It captures the essence of his hand as a watercolour painter, but it also works on cloth. The scale, the movement – you can just imagine that fabric in motion.” 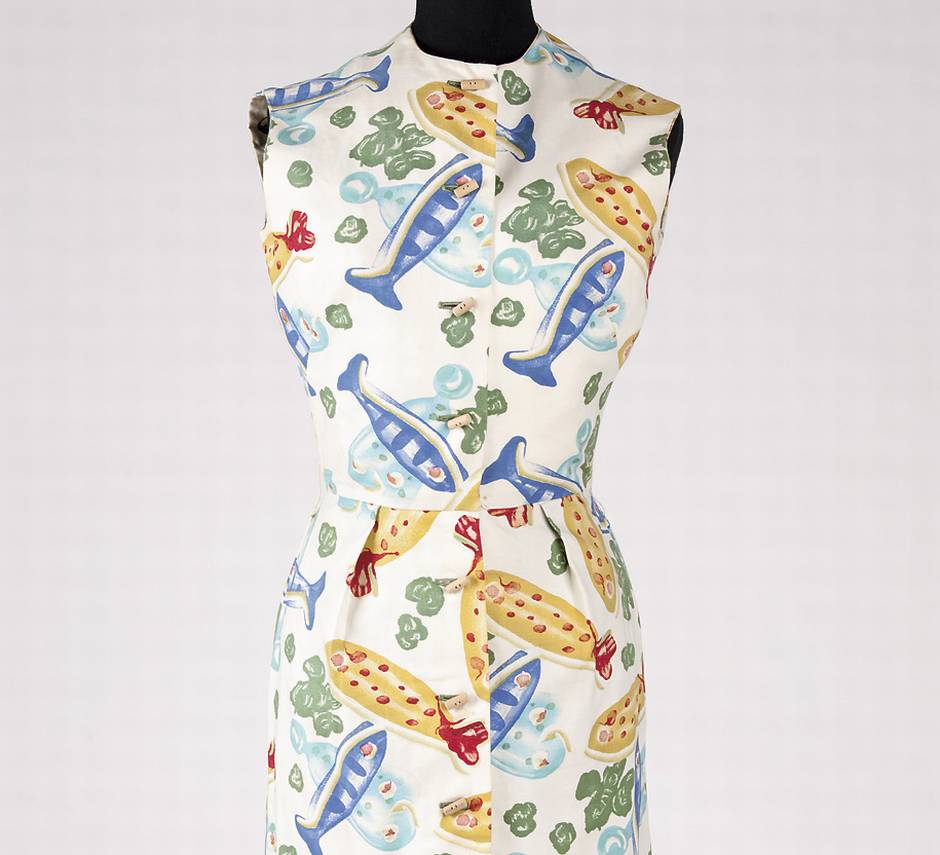 Picasso’s 1955 Fish print for Fuller Fabrics, left, was used on a dress designed in the same year by Claire McCardell for Townley in New York.

Notably, the artist’s signature repeats across the yardage as well, rendered in tiny but clear script. It’s an intentional inclusion that not so subtly cashes in on Picasso’s status as a full-fledged 1960s art celebrity. “He couldn’t resist,” Quinton says with a laugh.

What the fabric doesn’t make visible is Picasso’s uneasiness with sacrificing creative control over his product. The artist famously stipulated that his textile designs could be used for any purpose – except something that could be sat on.

“Did he think, ‘Wait a minute, people might actually use and sit on this fabric?’” Quinton wonders. “Of course, when you’re making something for the masses, you can’t control it. There’s a beauty, I think, in the control that these artists were giving up. They did get paid, of course, but there’s also something else involved, and that really was about getting their art out there in an accessible way.” 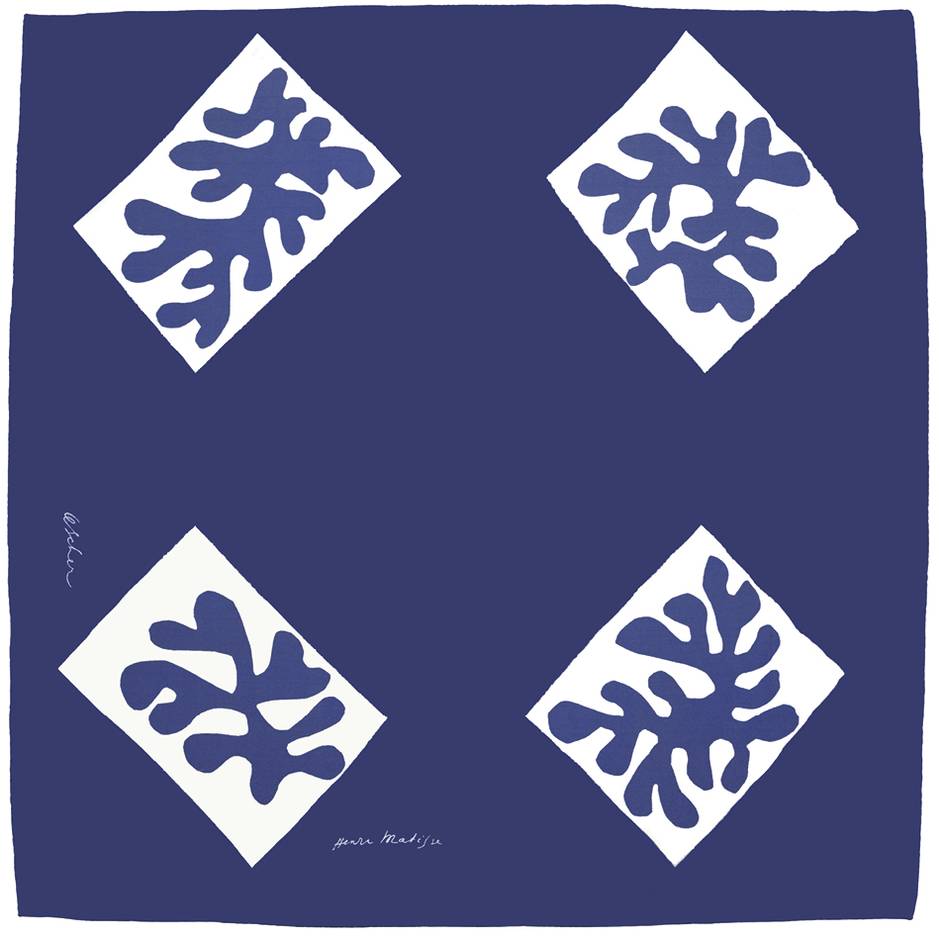 Henri Matisse’s Echarpe No. 1 pattern was screen-printed onto a silk scarf for Ascher, U.K.

Artist Textiles: From Picasso to Warhol opens on May 2 at the Textile Museum of Canada in Toronto. For more information, visit www.textilemuseum.ca.