Melanie Boyle
Contributed to The Globe and Mail
Published December 3, 2019 Updated December 3, 2019
Comments
Please log in to listen to this story. Also available in French and Mandarin. Log In Create Free Account

I was surprised to realize I had never written my daughter a letter before. But then again, distance had never been an issue. Growing up, we saw each other practically every day and, if not, there were always new, more efficient ways to catch up: chatting on the phone, trading texts. My daughter isn’t one for typical textspeak, but there was always that emotional shorthand: the smiley face emoji. Always the simplest one, never any of the more expansive or goofy emojis, but reliably happy, much like her. Seeing it there in her texts is almost as reassuring as hearing the lift in her voice.

As a mom, I was never one to leave little letters in her lunchbox (although the Tooth Fairy did under her pillow). There were lots of Post-it notes, but that hardly counts. Thankfully, I never had to write her a long letter as some parents do when they know they will not be around to see their young child grown.

But now she is studying in Halifax – more than 4,500 kilometres away – and she needed her new driver’s licence. Yet when it came to the simple task of redirecting her mail, I felt a pang of indecision. Should I cross out this address and reuse the brown government envelope to rewrite her new address in Halifax? Or shall I write her a letter as well? Can I open her mail and wrap her photo ID into something of my hand and thoughts before I send it skipping like a stone across the country all the way to the other shore?

I sat down at my desk that looks out to the sea and found a piece of paper and a comfortable pen. The fall sun chipped at the waves and it felt as though it were the first day of something new, but I couldn’t say what.

I didn’t write about much: That luminous clouds were piling up on the horizon and maybe a change in the weather was coming; that her aging dog was fine and flat-out snoring on the little daybed beside me; the garden was looking pretty good, but the roof still leaked. Nothing profound or instructive, just small observations that would bring my world a bit closer to hers. I think in my letter I said, “by the time you read this we will have probably FaceTimed.” Which is to say: this may be pointless but I am going to write anyway.

For me, writing a letter has always been more than a way to get the news across. It is about offering up something of my life, whether understood or not, something to be treasured or tossed away. Writing a letter is a gesture of trust, a setting aside of time for reflection. It slows an expedited life. When you write a letter, you do so with no expectation for return. You are not going to be there to watch your reader, to see if their lips move, their eyes shine or the light goes dull as they scan the words you have chosen for them. But when you are writing, you can imagine that moment, and it narrows the distance. You don’t know where or when they will open your letter and read it, although you hope they will. If you are brave enough to send that letter, dropping it into a mailbox beyond retrieval, you are feeding the bond between you and those you care about, between the self everybody else sees and the one only you know.

Similar to the wasp tapping outside my window, we all find ways to keep ourselves alive.

When I was young and living far away, writing letters was how I stayed close to the people I loved. Sometimes I would tuck in a golden leaf, a strand of grass, a snipped out article from the free weekly, a matchbook cover, a transit stub as a bookmark, the delicate tissue Spanish oranges came wrapped in. Since phone calls were few and far between, you could send the news in a letter and it would still seem fresh. Keeping in touch was a process: It took effort to find what you thought were the right words and lay them down by hand on a page; it took patience to unravel them. When the letter was done with nothing more to add and you were standing at the post-office counter, there were stamps to buy. Why not buy a string of them? A constellation of 1-, 2-, 10-, 34-, 50-cent stamps to make up the postage because they looked great? The parade of images across the top of the envelope and all the little fragments stuffed inside were similar to hieroglyphs emitting their own coded message: Here is my life now, but even this far away, I care. My own smiling emojis.

When the letter to my daughter was done, I folded it up along with her driver’s license and put it in a new envelope. From the small stash of stamps in my desk, I chose the Nanaimo bar one from the “Sweet Canada” dessert series. Touchingly local and achingly sweet, it is a treat she and I would share from time to time on the B.C. ferry (but, really, who ever ate a filling that thick?).

I was tempted to draw an arrow pointing to it so she would notice the stamp, my choice, our inside joke. But no, I thought: if she sees it and gets it, great; if not, that’s okay. Remember you have a new task now, and so does she. It’s her turn to discover the details and hidden clues of her own wooded paths and rocky shores and empty, early morning streets. Maybe she will tell you or text you or even write you someday about what she finds. But just maybe. And that’s all you can ask.

I am determined to make a scrapbook for my niece, but I have no idea where to start
December 19, 2017 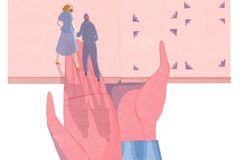