After a quick glance at the menu at Kojin, the revamped third-floor restaurant at Toronto’s Momofuku, what surprises is what’s missing from the page. There are plenty of steaks, meat, corn and potatoes, but no noodles, no steamed buns, no Korean dishes – hardly any Asian influence at all. Is this really a David Chang restaurant?

The Korean-American forged a new cuisine over the past 14 years by paying homage to Asian traditions but giving the middle finger to rigidly codified “authenticity.” Over the past decade, he’s popularized ramen, baos and lettuce wraps to the point where all three now appear on mainstream chain restaurant menus. And he’s broken down ethnocultural barriers with culinary mashups that change how we experience traditional dishes: Mr. Chang’s version of kalbi jjim (Korean braised short ribs), for instance, comes with a sheet of melted raclette cheese at Majordomo, his new restaurant in Los Angeles.

But with a menu that focuses on South American-inflected food, Mr. Chang’s new Toronto venture stakes out a new frontier for Momofuku. It also proves two points. One, local executive chef Paula Navarrete is a talented rising star; and two, the Momofuku group is striving to be larger than Mr. Chang himself. He’s defined a cooking ethos and devolved power, and as a consequence, the food is now less Chang-ian, less Asian. If you visit Kojin expecting the Asia-inspired dishes you’ve heard about on his weekly podcast or his Netflix TV series, you may leave disappointed, or at least vaguely unsettled. But approach the new room as an example of what can happen when Mr. Chang steps back and allows individual chefs to develop restaurants with individual character, and you’ll be pleasantly surprised.

Kojin replaces two smaller restaurants – Shoto, a 22-seat tasting-menu-only room, and Daisho, a less-expensive fine-dining option – that were successful when they launched in 2012, but have seen dwindling crowds of late, despite occupying prime space in the Shangri-la Hotel on the edge of the financial district. “No one was closing deals at Shoto,” as one restaurant insider told me. (The ground-floor Noodle Bar remains unchanged.)

The new room is named after the Japanese god of hearth, fire and kitchen, a reference to the wood-fire grill that’s been installed in the middle of the open kitchen. Open-fire cooking has been so trendy lately that Kojin at first appears to be playing catch-up, but the grill plays to Ms. Navarrete’s strengths: A cook who started at Momofuku’s Noodle Bar six years ago, she has the butchery chops from her time at Sanagan’s Meat Locker and a Colombian heritage that loves live-fire cooking. Beef from the grill is the menu’s feature star.

Both times I went, the crowd – a mix of photo-taking foodies, families, romantic dates and business diners – seemed as surprised as I was by the menu.

Mr. Chang gave Ms. Navarrete free rein to pursue her own ideas within the Momofuku framework – create dishes that reference local ingredients and transcend cultures. There are no noodle dishes, but corn and potatoes (Colombian staples) appear in many forms; no soy or gochujang, but chillies add spice to some plates. The menu is far more western than eastern. (To be fair, Momofuku has never been exclusively Asian in its cooking and two of its restaurants in New York are Euro-inspired: Nishi, Italy; Ma Peche, France.)

The raw fluke ($23), seasoned with a rye bonji that is fermented in the Momofuku lab in Brooklyn, is the one dish that overlaps with the menu at L.A.’s Majordomo, and for good reason. The bonji is a wonderful condiment – a thin liquid with the flavour of a less-salty miso. A brilliant match for raw fish.

The restaurant’s Asian sensibilities gradually disappear from that point on. Ms. Navarrete’s Colombian/Chinese arepa/bing mashup leans far more to the former than the latter. Mr. Chang is obsessed with bing, a wheat flour bread that is crispy and chewy at once with many variations across mainland China. Ms. Navarrete’s take is her corn flatbread. It’s crispy, airy and tasty, but it seems pricey at $14 when it comes with only butter and spiced honey. The better option is the bread with Niagara ham and pickled cherries ($17), although as good as the ham was, I experienced no major epiphany about the cultural paradigms of flatbreads.

Ms. Navarrete shows off her butchery skills with a daily sausage board. On our visit, there’s chicken-kimchi-cheddar, pork-and-shrimp and a smoky beef frankfurter. The first two are fine, but the frankfurter steals the scene – the simple-looking thin hot dog is so full of flavour that I’d happily pay a hefty premium for it at a ballgame. The Blue Jays should hire Ms. Navarrete as a consultant chef.

Inspired by the steakhouse vibe, I split the 14-ounce boneless ribeye ($77). It’s aggressively seasoned, right to my limit for saltiness, and cooked perfectly medium rare and sliced to share. The fat was correctly rendered to a buttery texture – the kind that a beef lover won’t trim – and the flavour was deeply satisfying. It was the best I’ve had this year.

On my second visit, the two of us split the “chicken in a pot” ($69) – a whole steamed chicken served two ways. In one dish, the breast sits along with deep-fried wings atop crispy rice and a smattering of chimichurri. A second vessel contains a soup made of the legs and charred peppers, corn and potatoes. Mr. Chang has a similar two-dish preparation at Majordomo, but here, Ms. Navarrete supplants her native Colombia as the main inspiration and the result is wonderful. It’s surprisingly subtle, brilliant, delicious and innovative – the most successful example on my two visits of the culture-crossing that Momofuku has trail-blazed.

Desserts, if you’ve room for them, are very sweet and heavy. The dolce de leche cake ($15), topped with vanilla ice cream, is a big fat sugar bomb in the best way. So is the ice cream cake ($15) with layers of maple sugar, peanut butter and chocolate. These are rich, decadent things that, upon finishing, make you want to curl up on a couch and watch a Star Wars marathon.

Kojin is Ms. Navarrete’s show – that’s abundantly clear by the end of the meal. But it’s Ms. Navarrete channeling Mr. Chang’s ethos, playing off her ethnicity and geography to come up with new creations, and she does a good job. This is the emerging Momofuku blueprint, Mr. Chang says in an interview. “It’s a constitution, almost. It’s very collaborative and free.”

So perhaps it’s unfair that I left Kojin yearning for a little more of Mr. Chang in the meal we’d just eaten. This may be the unintended consequence of his growing media profile: I’ve listened to his podcasts and watched his shows. I support his culinary philosophy and feel kinship with his obsession to delve into the cultural roots of all foods, as he routinely does in media. I can’t help but want to eat whatever he’s talking about – and it’s not what’s being served here in Toronto. As good as the steak is in Toronto, we still wonder about that barbecued short rib they’re serving in L.A.

Kojin is Momofuku, but it’s not Chang. It’s Navarrete. Maybe one day she’ll have her own Netflix series too.

One star: Good, but won’t blow a lot of minds.

Three stars: Excellent, with few caveats, if any. 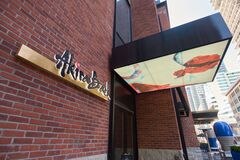 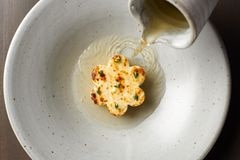 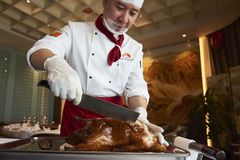