In this millennial dining age, there is no chef in Calgary who has run as many kitchens in highly regarded local restaurants or received as many awards or accolades and remained as under the radar as Giuseppe Di Gennaro. Ask an early twentysomething to take a break in-between licks of his charcoal ice cream to ask who exactly chef Di Gennaro is and you may receive a "Huh?" or a blank look.

That is not a generalization.

Thus, a brief lesson in Calgary chef history: Giuseppe Di Gennaro originally ran the kitchen at the late Il Sogno (where Whitehall is now) before opening his own restaurant, Capo, (now The Fine Diner) in Inglewood. When the small, refined Italian concept opened 11 years ago, it was to phenomenal fanfare. The now-restaurateur even managed to snag the runner-up spot on enRoute's buzzworthy Canada's Best New Restaurants list for 2006.

Five years passed and Mr. Di Gennaro closed those doors and opened Borgo Trattoria (now vacant) on 17th Avenue to similar excitement and adornment. The eatery was far more approachable than its predecessor, offering coffee, brunch, lunch and dinner, but still glossy in its design, high ceilings and service. Several years later, Borgo shuttered and Mr. Di Gennaro stepped away from the Calgary food scene altogether to refocus and re-evaluate.

This past spring, the chef returned with Cotto, a surprisingly simplistic restaurant in the Kensington neighbourhood. It was an even further departure from his Italian fine-dining roots.

Cotto is the only chef-driven eatery to open this year in Calgary that is simply interested in serving thoughtful food to its neighbourhood residents. Grasping for the top spot on this list or querying why the restaurant might not be awarded that? It's evident that it's time in Mr. Di Gennaro's career to let the young bucks worry about such things and just cook with his heart. Perhaps more heart than he ever has before.

A true test of an Italian restaurant is its arancini. At Cotto, four seemingly perfectly golden crispy spheres dusted with Grana Padano hold warming portions of risotto in a shallow pool of hot cheese fondue. This is how everyone should start a meal here.

"In Carrozza" will appear quite unappealing at first glance because of thin slices of mortadella filled up with Taleggio cheese, folded up, seared (think bologna cold cuts cooked in a pan by a teenager) and stacked next to a pile of tomato wedges and arugula. Looks can be deceiving, though, and such is the case here with this delectable dish, especially if you manage to get some of the crushed pistachios into each forkful.

The grin-inducing plate of spaghetti carbonara with its little crispy bits of house-made bacon is expectedly rich and fulfilling, especially as our warm fall days dwindle, but the addition of the beautifully seared square of porchetta – glistening a fiery red on its crisp exterior – makes the glutenous Italian staple something much more memorable.

Likewise, the very generous portion of saltimbocca makes a lasting impression. Thin slices of veal are accompanied by a lovely balance of fresh sage, salty prosciutto and a tangy white-wine sauce. A pile of hearty fingerling potatoes and lightly dressed garden greens to its left makes this a dish that is easily shared by two.

A lone disappointment was Mr. Di Gennaro's gamberi e panzanella – a panzanella that goes quite outside of the box, seeing cubes of overly chewy bread soaked in an indistinguishably flavoured simple syrup before being tossed with roasted bell peppers, olives and hidden by the two splayed prawns. Imagine sipping the liquid from a jar of maraschino cherries in-between bites of salad. This is the only taste comparison I can liken it to.

The chef's desserts, like most other things on the menu, are mostly traditional with a couple of creative accents to help elevate while maintaining approachability. Tiramisu receives a delicate upgrade by way of the crushed amaretti and almond granola topping and an unbelievably creamy vanilla panna cotta and its sweet companions roasted strawberries and buttery, crushed Italian frollino cookies collectively borders on divine revelation after the first bite.

There may not be a graphic-heavy accent wall to Instagram and you certainly will not find a funky natural wine on the menu here, but let dining at Cotto serve as a palatable reminder that thoughtful Italian cuisine will never go out of style. 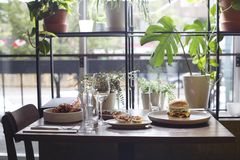 Review
Oxbow serves up a fine dining experience, with a forgettable finish
September 15, 2017 Review
Cilantro and Chive makes for a savoury pit stop between Edmonton and Calgary
September 8, 2017 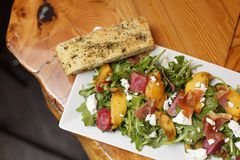