It's a myth that all wines get better with time. Most are designed to be consumed young, and those supposedly built for the long haul can often disappoint. If there's beauty in age where wine is concerned, I'd submit that you're more likely to find it in old vines, not wines.

Perhaps you've noticed the designation on a label and wondered about its significance. Here it is in a nutshell: Old vines yield more concentrated fruit, resulting in richer wines with more sumptuous balance. They're often, but not always, more expensive. A few, notably from California and Spain, can be had for less than $15. All other things being equal, I'd take geezer vines over Bieber vines any day.

But it's a term fraught with ambiguity. In France, New Zealand and Canada, seniority can mean 30 years. In Australia, California and Spain, the cutoff is more like 50 or 60. In a game of showy one-upmanship, a few California producers, with vineyards planted 80 to 100 years ago, have adopted the designation "ancient vines." By that measure, a few vineyards in Australia are downright Jurassic. The site of the oldest wine-producing plants on Earth, the country boasts gnarly old trunks dating back more than 150 years, the upper limit of longevity.

It may be surprising that France, with its many " vieilles vignes" bottlings, is not the great-granddaddy. It falls short for a couple of reasons. First, virtually all of Europe's vines were destroyed between the late 1800s and early 1900s, victims of a sap-sucking root pest called phylloxera that necessitated replanting on resistant North American rootstocks. But it's unlikely France would have trumped Australia in any case. Vines don't live forever, and as with humans, lifespan has a lot to do with where you live. In relatively rainy parts of Europe, such as most of France, vines throw in the towel decades before they tend to in arid regions of South Australia, California, Chile and much of Spain.

Harsh winters exact a toll too. That's why in Canada – the youth of our wine industry notwithstanding – 30 or 35 can justifiably be considered old.

"The optimum winemaking life of a vine is between 20 and 40," says Grant Stanley, winemaker at Quails' Gate in British Columbia's Okanagan Valley, who produces a superb $40 "old vines" marechal foch reserve from a vineyard planted 47 years ago, one of the oldest in Canada.

Beyond 40, the accountants start breathing down your neck because there is dwindling return on your investment. Old vines produce less fruit, and unless you can fetch exorbitant bottle prices (a tough proposition for Canadian producers), you've got to pull up and replant with more vigorous young vines.

But exacting winemakers like to push limits (and their accountants). They know that old is gold, and the secret is in the plant's metabolism. Young vines, though productive, deliver variable quality from year to year. When the sun shines, they explode with foliage, which can produce bitter grapes. When it rains, they bloat with water. You've got to prune like the dickens to curb vigour and encourage ripening. By contrast, old vines are constant, their reduced sap flow naturally yielding smaller berries with a higher ratio of solids to liquid.

Deep roots are a big asset too. They tap moisture in drought conditions and guard against bloating when it pours from above. Old vines also tend to ripen earlier, a boon to growers in cooler climates, where falling autumn temperatures abbreviate the growing season.

Bottom line: It's a difference you can taste. Old-vine wines deliver textural richness and layered flavours that build rather than trail off after the up-front fruit fades away. It's analogous to the warm, rich tone of an old violin versus the brighter timbre of new wood.

"You get that weightiness," says Angelo Pavan, winemaker and a founding partner of Cave Spring Cellars in Niagara, whose top-end CSV riesling comes from vineyards planted in the mid-1970s. "With young vines, you get nice, aromatic wines, but you taste them and you've got a hole in the middle. I like to chew my wines."

That chewiness becomes more apparent as the wine ages. Keen consumers know that old vines tend to have a better track record in the cellar.

That's not to say that wines from newbie vines can't deliver charm. Mr. Stanley of Quails' Gate once helped to craft a wine proudly labelled "young vines pinot noir" from vineyards no older than five years. That was while he worked at New Zealand's famed Ata Rangi estate. It was sort of the winemaking equivalent of turning inexperience into a virtue on a résumé. "I'm young, I don't know much, but I've got energy!"

That business decision served two purposes. It highlighted the wine's candied-fruit exuberance and permitted the winery to reserve its older-vine fruit for a more expensive flagship red. The bean (or grape) counters were happy. And so were consumers. "It was a great pinot," Mr. Stanley says. "And we see that with pinot noir. It can be nice in early life, then it comes back again in its late teens."

And whether or not you can discern the chewy essence of an old-vines wine (and we're ultimately talking nuance here), the designation says something about the producer more generally. If an estate has taken the care to set aside precious old-vines fruit and bottle it separately from the younger stuff, there's a good chance that it cares about the quality of every wine in the lineup. Like its vines, it's in business for the long haul.

The fruity-aromatic chasselas, 40-per-cent of the blend, hails from vines planted 37 years ago. An inspired grape mix, this white shows a luxuriously plump texture, with notes of ripe pear, banana and tropical fruit as well as a subtle musky quality. Sweet on the entry, it finishes dry and would pair beautifully with light curries or mild cheeses (but I like it plenty on its own). Available in British Columbia.

Vines planted between 1908 and 1968 yield a dense, smooth, succulent red, with flavours of blueberry, chocolate and spice. Ideal for barbecued ribs or burgers.

A white Burgundy with good balance and complexity. Medium-bodied, it features opulent fruit, brown butter and nutty nuances along with the lively acidity on the long finish. Pair it with meaty fish or poultry, either roasted or in a butter or cream sauce. Available in Ontario.

Remarkably, some of the vines here date to the late 1800s, planted on sandy soils spared from the phylloxera root-louse epidemic. It's a full-bodied red from Spain's Jumilla region, with a polished texture that becomes juicy on the finish, with dark-skinned fruit and a herbaceous character vaguely recalling Loire Valley cabernet franc. Pair it with grilled lamb. ($14.99 in B.C., $15.25 in Quebec.)

From a vineyard planted in the 1970s and 1980s, this light-medium-bodied white shows a fruity core that evokes McIntosh apple, with floral notes and acidity lifting the sweetness to a virtually dry finish. Try it with pan-seared shellfish. Available in Ontario.

Another impressive value from Spain, it was crafted from the fruit of 80-year-old vines. Full-bodied, this red weighs in at 15-per-cent alcohol, showing concentrated, raisin-like fruit balanced with peppery spice and licorice. Leg of lamb or rich, meaty stews would suit it nicely.

Medium-bodied, very dry and earthy, this red shows plum and cherry nuances with a tug of astringent tannins and spice. A good choice for pan-seared duck breast. Available in Ontario. 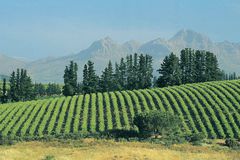