The question: My father has dementia and we have been looking after him at home. The last thing we want to do is put him into a nursing home during the COVID-19 pandemic. But he is a challenge and is agitated at times. I’ve heard that cannabis has a calming effect on people with dementia. Is that worth trying?

The answer: Agitation, which includes restlessness, general emotional distress and sometimes aggression, is a major problem for people with dementia, as well as their caregivers.

The existing drug treatments – mainly antipsychotic medications – are only modestly successful in lessening agitation, and they also carry risks of harmful side effects.

Dementia experts generally agree that behavioural interventions should be tried before turning to these medications. For instance, it may be possible to identify the cause of the agitation and develop a solution or an appropriate distraction, such as music or pet therapy. But, as the disease progresses, agitation tends to get worse and behavioural approaches become less and less effective.

So, there is a real need for new treatment options, says Krista Lanctôt, a senior researcher at Sunnybrook Health Sciences Centre in Toronto.

This need, she adds, has raised interest in cannabis because it has a wide range of effects on the brain, some of which might help deal with certain troubling dementia symptoms.

But only a handful of small studies have actually explored the use of cannabis products in patients with various types of dementia including Alzheimer’s disease. And, so far, the research results have been mixed.

One of the most promising studies involved 39 patients with moderate to severe Alzheimer’s. The trial was designed to assess nabilone, a drug that is currently approved for treating chemotherapy-induced nausea.

Nabilone contains a synthetic form of tetrahydrocannabinol (THC) – the psychoactive ingredient in cannabis.

Each patient received both the real drug and a placebo, in random order, for six weeks.

“Nabilone treatment was associated with a clinically and statistically significant reduction in agitation over six weeks, compared to the six weeks on placebo,” says Lanctôt, who led the study. “Also, caregiver distress was significantly lower.”

Although the results are promising, Lanctôt says the findings need to be confirmed with more research.

She notes that marijuana contains a lot of different cannabinoids. In order to understand their potential effects – both good and bad – it’s critically important to isolate the components and study them in a systematic fashion and in combination if warranted.

Lanctôt is already planning a larger study involving 168 patients, who will be divided into three treatment groups. They will receive either nabilone or a placebo, or cannabidiol oil (CBD), a compound derived from marijuana plants.

Dallas Seitz, an associate professor of psychiatry at the University of Calgary, agrees that it’s far too soon to recommend cannabis for agitation. “I think it’s good that we don’t jump on the bandwagon right away because there is so much misinformation out there about the potential benefits of cannabis.”

Indeed, there is reason for caution, particularly in this vulnerable patient population.

Previous research suggests that cannabis may worsen memory. So, cannabis might not be appropriate for people in the early stages of dementia while they still have their cognitive abilities largely intact.

Cannabis also has a sedating effect, and that’s not necessarily a good thing. Too much sedation, which is often linked to a higher dosage, can lessen quality of life if a person is sleeping much of the time. It can also increase the chances of having a catastrophic fall.

What’s more, cannabis may interact with some medications including warfarin, a commonly prescribed blood thinner. “It could increase the risk of bleeding,” Lanctôt warns.

She also points out that the positive findings from her nabilone study offer “absolutely no evidence” that agitation can be eased by recreational and medical marijuana.

The synthetic THC in nabilone is structurally different from natural THC, she explains. In fact, a few earlier studies suggest that natural THC does not reduce agitation.

To further complicate matters, there is a huge variation in cannabis products, which contain very different ratios of THC to CBD.

What’s needed, Seitz says, is a well-studied standardized product. “That would allow us to say that a certain compound, at a specific dose, will have a predictable effect,” he says.

In the meantime, some families may still be tempted to try cannabis with their loved ones. If they do so, Lanctôt says, they should seek the guidance of a doctor and a pharmacist to minimize the potential for harm. 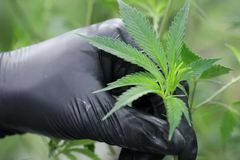 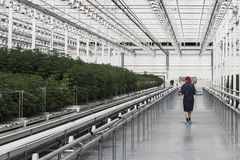