Snow, ice, sleet, slush. Winter may not offer ideal conditions for runners, but that doesn't mean you have to stay indoors, falling behind on your training for spring and summer events. In fact, many races, such as the Sporting Life 10K in Toronto, are 10 weeks away, meaning there's ample time for novice runners to get up to speed for race day - if they start now. The inclement weather simply requires a little more planning. Follow these winter training techniques and you'll be able to battle the elements and get ready for spring run-off.

Add extra time to your warm-up

Stretching before a run is always advisable, but in the winter, make sure to add an extra 10 to 15 minutes to your warm-up, especially if you are running in the morning, says Jenny Hadfield, author of Running for Mortals. "Your muscles are already shorter and colder because you've been sleeping and inactive inside," she says. Looking for a shortcut? Ms. Hadfield offers this tip: "Sometimes I get in the shower just to wake up my body if I'm going to go a little bit longer. It kind of preheats your body. It's a MacGyver way of doing it."

In the winter, you need to take the time to map out your run before you head out. You don't want to be 15 kilometres out in the middle of nowhere when you realize you have too many layers on or find yourself on unknown terrain. Alex Coffin, who runs the website marathoncanada.com, suggests running in loops. "That way, you know where the potholes or the ice is," he says. Once you do, you can run the second loop with more confidence. As well, plan your loop to go by your house or car so that you can drop a layer if you are too warm.

Don't let the fact that there's no hot sun beating down on you make you think you don't need to hydrate. "You're perspiring just as you would in the summer time," Ms. Hadfield says. Of course, you may not need to carry as much fluid as you would in summer. As well, if you're going out for a long run, put warm water in your water bottle rather than cold, she says. "It will take longer to freeze."

The safest thing when running in snowy or icy conditions is to slow it down. By shortening your stride and slowing your pace a bit, you have a better chance of avoiding injury by decreasing your risk of slipping. Kevin Smith, president of Marathon Dynamics, a Toronto-based coaching company, cautions against suddenly adjusting your stride or tempo when you are on ice or other slippery surfaces. "Because if they change stuff when they're on it, guess what happens? They fall down," he says. Keep an eye out for ice and be ready for it.

It's hard to work up much enthusiasm for a long run when you look out the window and see piles of snow. "Motivation is the most difficult part of running in the winter," says Lorrie Dobni, president of the Saskatoon Road Runners Association. Joining a group run or finding a running partner will help get you out the door. "Knowing that you're going to meet your friends out there is great, because you think, 'They're all going to be there and if I don't show up because it's 25 below then I'm the one who's wimping out.' "

Running on snow means having to work harder, whether runners realize it or not, Mr. Smith says. It's likely that every mile run on snow will take one full minute longer to do than running on clear pavement, he says. That means that if you're heading out for a 15-mile (25-km) run, for example, you're going to be working an added 15 minutes. Shorten your distances appropriately.

The wind at your back

"Head out into the wind if at all possible. That's a very good idea, especially the longer the run you're going to do. It stops the sweat from chilling you down when you're on your way back. Plus, you're tired in the last half of a run, so there's more chance of feeling the effects of the freezing. And it makes it extra hard to return into the wind," Mr. Smith says. Check the weather channel just before you head out to see what the winds will be, he says.

If you are going to be running on snow or through slush, you may want to mix up your footwear. Ms. Dobni frequently wears trail shoes in the winter because their tread provides a better grip. "They're really good on the snow," she says. Ms. Hadfield prefers Yaktrax, an anti-slip traction device that attaches to shoes. If you don't want to change your shoes but they have a lot of mesh, wrap each one in duct tape to keep excess water out. Your feet will thank you.

Suck it up and hit the treadmill

"The treadmill is a fabulously convenient tool," Ms. Hadfield says. She'll get on it, she says, "when it's either icy or supersnowy to the point where you're really not running with your normal gate, or it drops much below 15 degrees Fahrenheit." No, you might not like it as much as running outdoors, but depending on how poor conditions are outside, getting on a treadmill offers a better quality workout, she says. 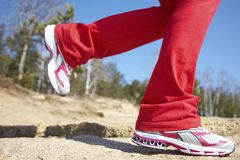 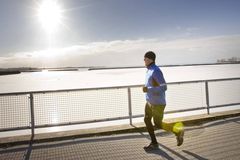