The last thing Martin Warren planned to do was to demolish a house and build a new one.

His company, Vanglo Sustainable Construction Group, was named, not as a statement, he says, but as a goal. “Not an hour in the day passes when that goal doesn’t come up.”

And knocking down a livable property to rebuild and turn a profit is not in his ethical wheelhouse. 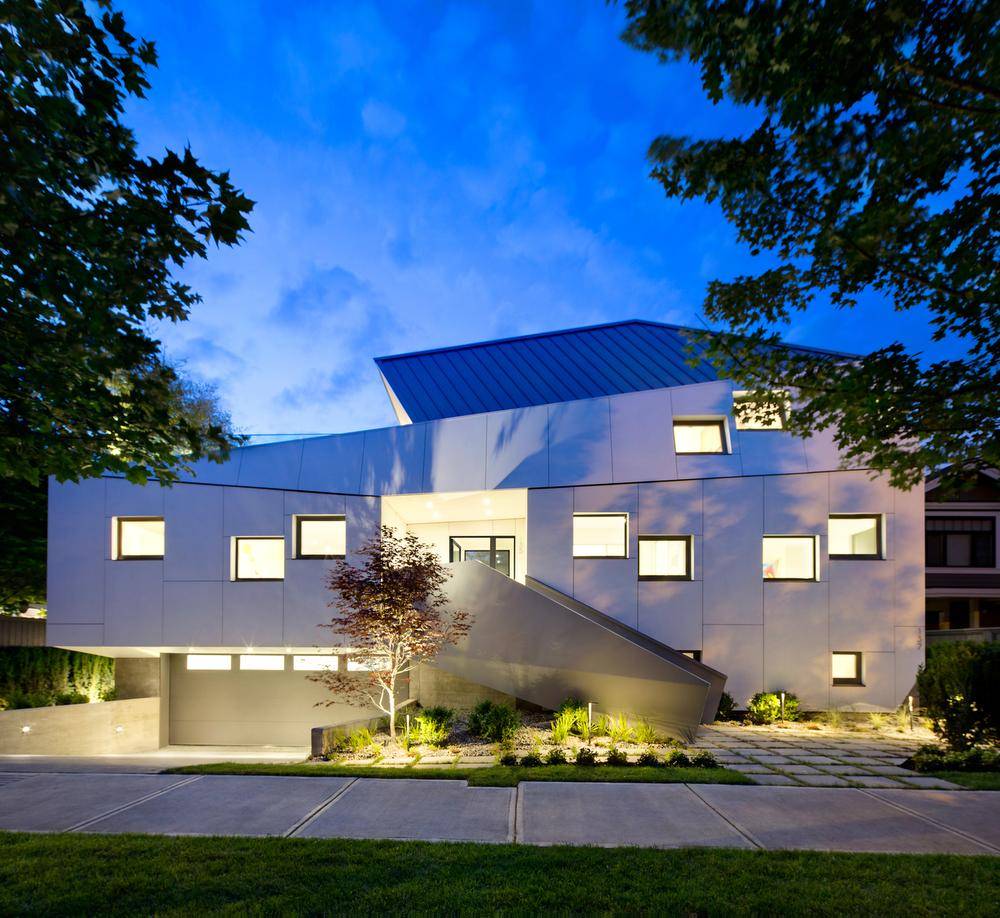 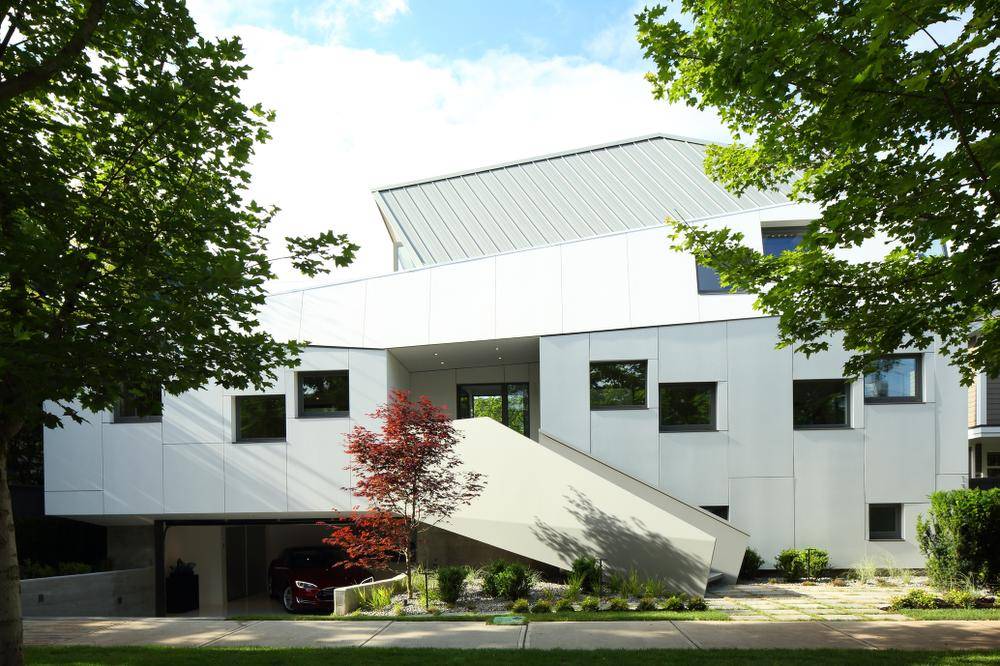 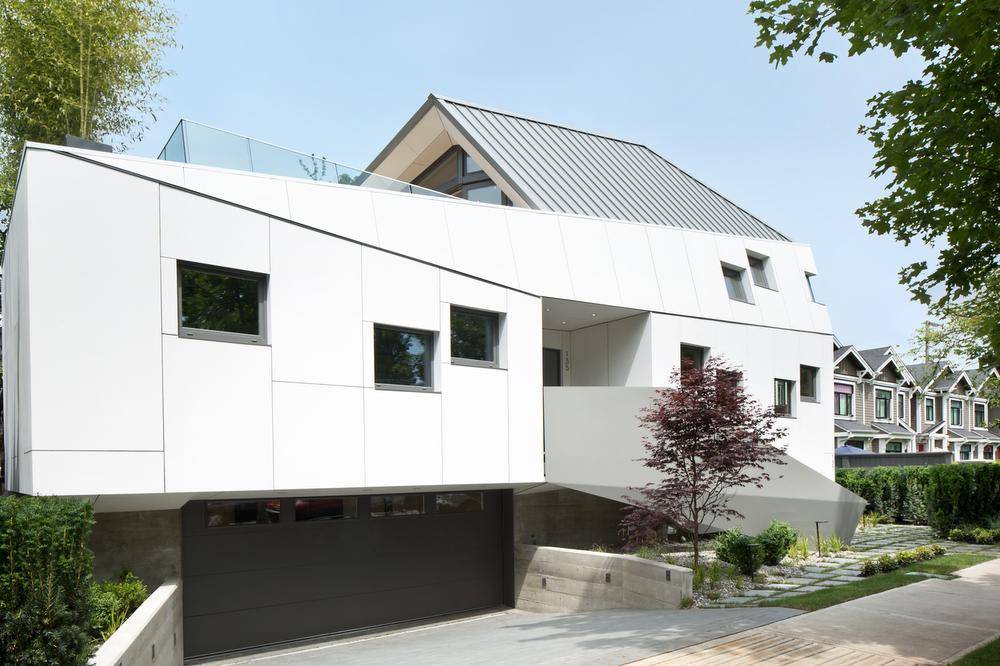 Yet, here we are, sitting at the dining room table of the company’s first from-scratch build – a startlingly modern addition to Vancouver’s Main Street neighbourhood, on a street where the only previous sense of style was the lack of one.

It wasn’t supposed to be this way.

Known locally for their renovation work on heritage houses and for the design of some of the city’s hippest restaurants – the original Boneta, the short-lived Corner Suite Bistro Deluxe, award-winning vegetarian spot The Parker – Vanglo was, Mr. Warren says, looking for their first total build project.

The goal was to create what Mr. Warren calls a “healthy house” that was low maintenance, using sustainable materials and built to the highest energy-efficient standards.

While contemplating an empty lot on East 17th Avenue, they became distracted when a property across the street came up for sale.

A derelict hodgepodge of a house that the company thought would be great to renovate, it went to another buyer, before appearing back on the market a mere six months later. Vanglo pounced.

“We bought it in 2012 hoping to renovate,” Mr. Warren says. “But it was such a mess, the bank deemed it ‘unlivable,’ and it was going to cost us so much to get it up to code, it dawned on us that this was our new build.” 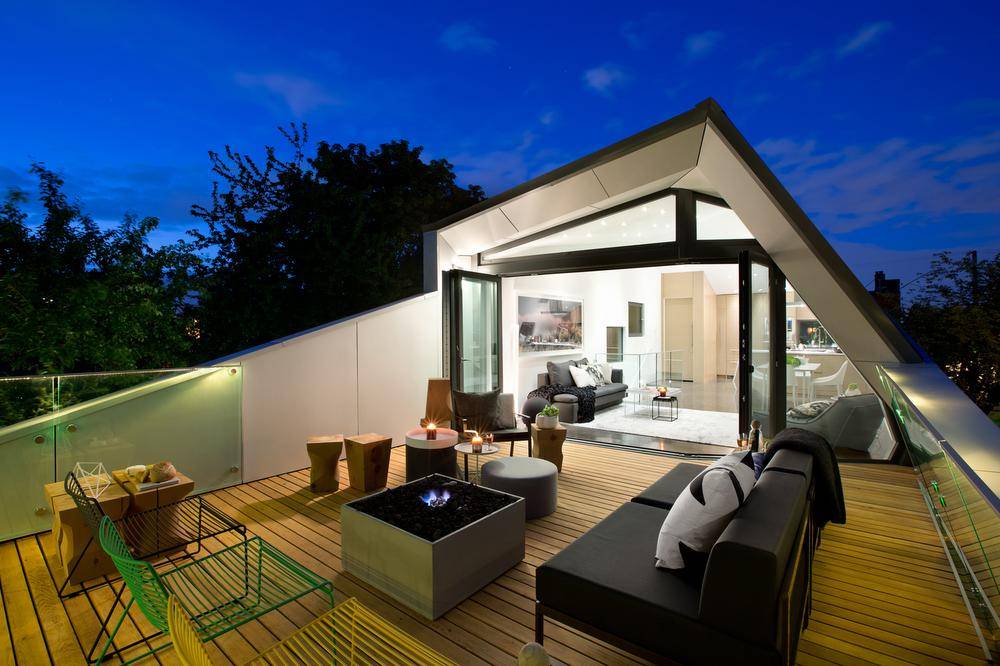 The result is a head-turner: a sleek, undulating structure that appears beamed back from the future – local kids call it the spaceship – it has curb appeal in spades.

Sitting on a decidedly odd lot – 66 by 44 feet – and pushed right up to the sidewalk (the front property line of the townhouse block next door sits on the back property line of the house), the design constraints gave Mr. Warren and collaborating architect Oliver Lang an interesting challenge.

“We didn’t want to build an ugly tall rectangle,” Mr. Warren smiles. “So we came up with this multi-faceted front that provides some shape.”

It also lent itself to one of the features Mr. Warren is most excited about: no load-bearing walls within the house (the frame consists of TJI trus joists made from engineered wood), allowing future residents to reconfigure the interior to suit their needs. 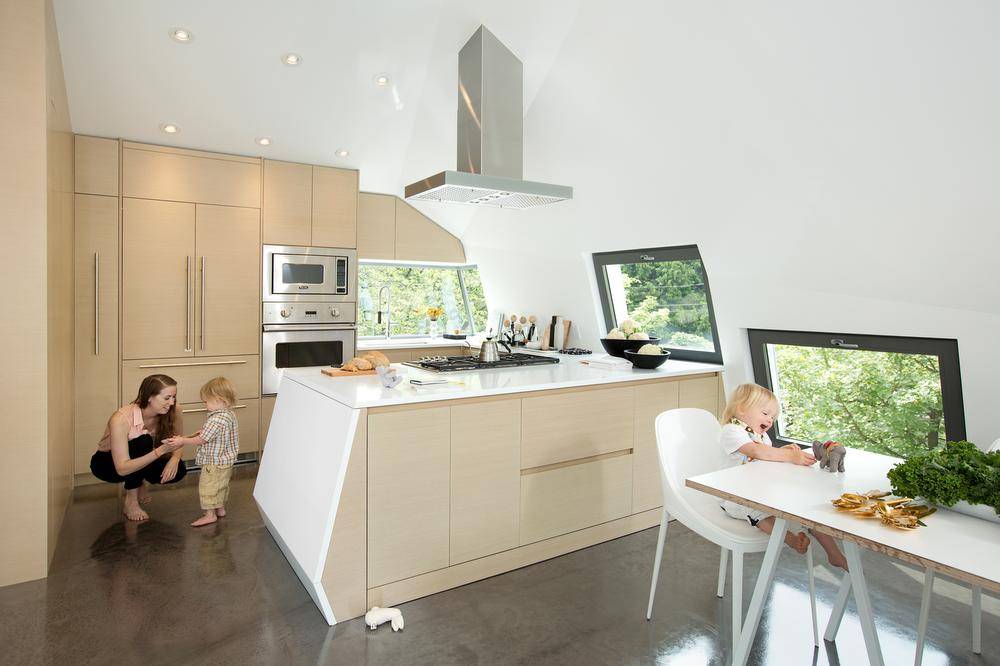 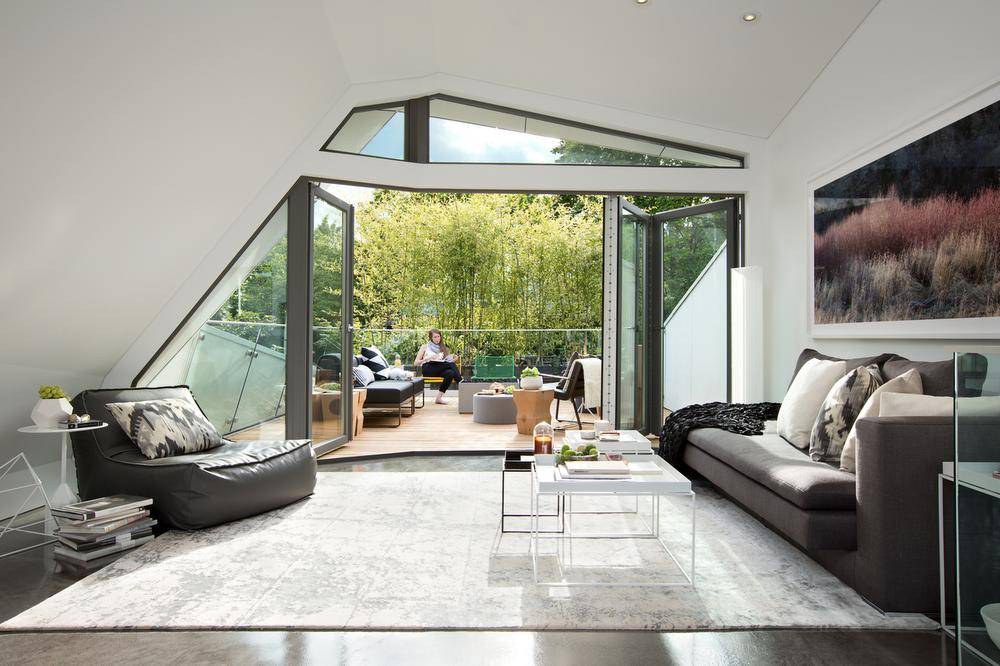 The result is a hyper modern interior, with heated concrete floors and white walls, accented with poplar – stairs, cabinetry, master bath ceiling – to warm things up and give an organic feel.

The attention to detail is notable: every conceivable storage space becomes a sleek push-release drawer; the master shower floor is heated to allow for quick drying and to negate the possibility of mould.

A legal, full-height, one-bedroom basement suite, finished to the same high standards as the main residence offers a budgetary incentive for purchasers looking to break into the sought-after neighbourhood (it’s listed at $2,228,000), and a 400 square foot “flex-space” heated garage offers creative solutions to those wanting to remain urban, but needing room to expand. 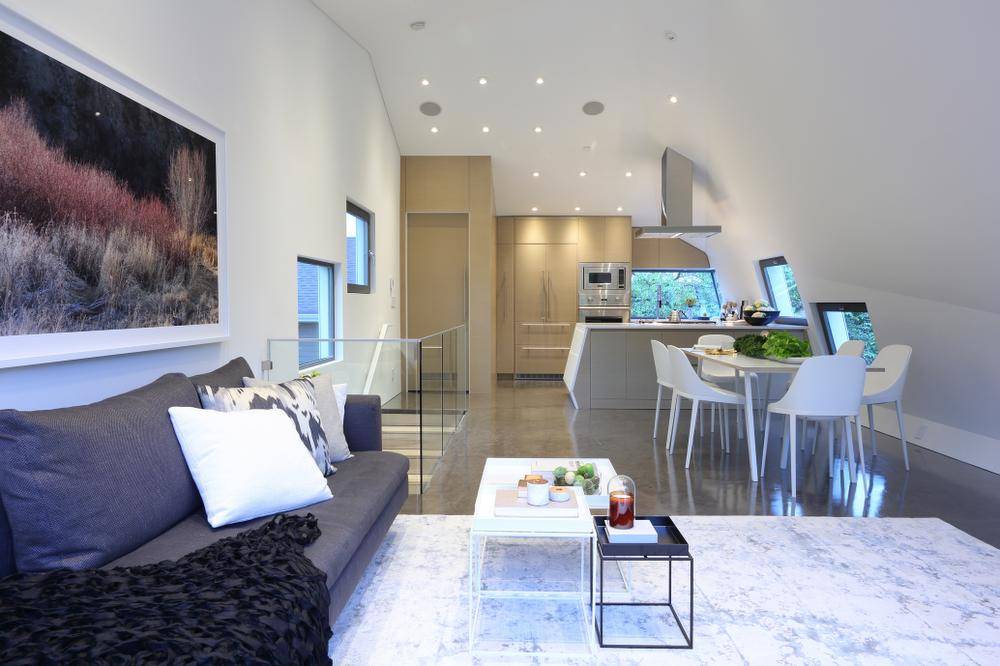 Looks, of course, aren’t everything, but scratch this property’s surface and Vanglo’s commitment to sustainability shines through.

First, the original house on the site was diligently recycled, with concrete, drywall and roofing materials all sent to recycling plants. The exterior was taken to a local firm – Urban Woodways – who converted 95 per cent of it into bioethanol fuel.

The new property is Energy Star certified – according to Mr. Warren, one of only three such properties in Vancouver – and features a water and air-tight exterior membrane, triple-pane fibreglass windows (with a lifetime guarantee) and a maintenance-free metal roof. Fresh filtered air is circulated throughout the home every two-and-a-half-hours by a heat recovery ventilator (HRV). 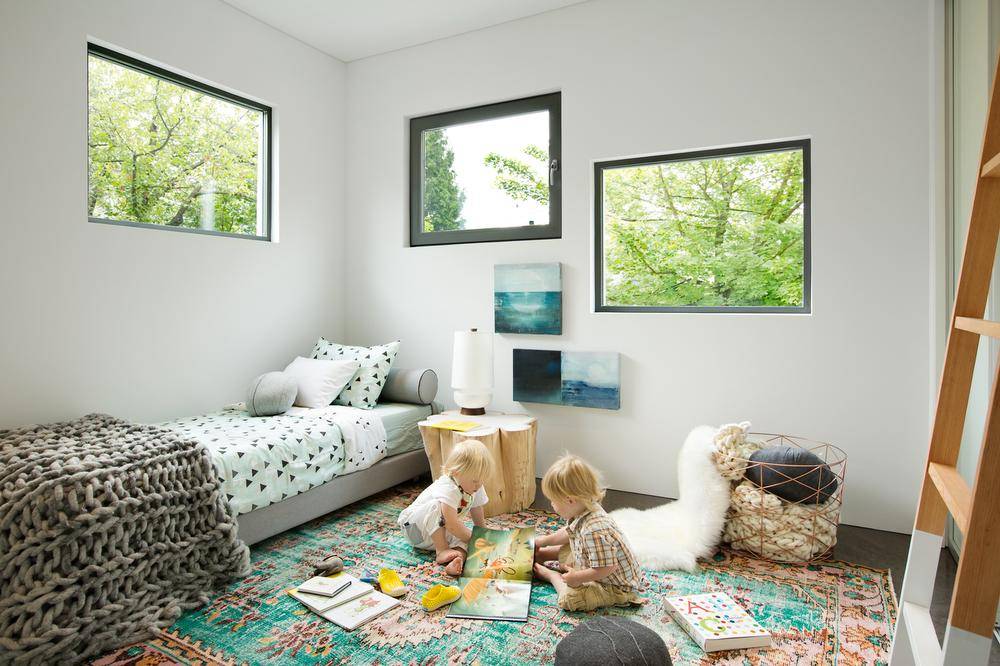 Energy bills are estimated to come in at least 25 per cent lower than the average house.

Mr. Warren can hardly contain his pride in the finished product. 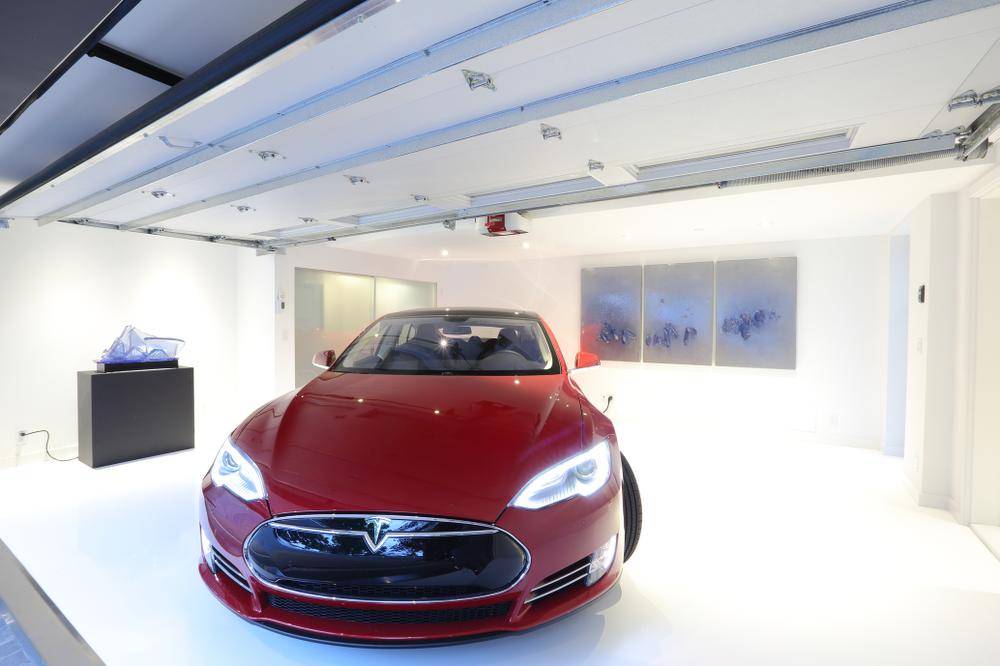 “It is beyond what we were hoping for,” he says. “I think it’s fun and sophisticated.”

But would he want to live in it?