In the eight years since Johanna Hurme and Sasa Radulovic founded it, the Winnipeg firm known as 5468796 Architecture (or 546 for short) has earned fame in Canada and abroad for its signature brand of fresh, practical, intelligent modernism. The practice has also acquired a reputation for doing notably deft designs in difficult spots, and often within very tight budgets. Until now, however, Ms. Hurme, Mr. Radulovic and their colleagues have not had an opportunity to show what they can do beyond a stone’s throw from the intersection of Portage and Main.

Having these promising architects try their Manitoba luck down in Hogtown is overdue. But it’s going to happen: 546 will make its very first mark on the ground outside home territory in Toronto’s east end, where Symmetry Developments and partners are putting up the 39-unit townhouse project the office has crafted, The Tree House.

Townhouse complexes are nothing new around here, of course. The real-estate fever of the past 25 years has littered the urban landscape with them – a few architecturally noteworthy, most not. As for imaginative energy and verve, we’ve seen very little in the local townhouse market that embodies these qualities quite as vividly as Tree House.

Several things make this project unusual. Sensitivity to site is one of them.

Unlike dimmer townhouse designers, who tend to clump units into tiresome rows and drop them any which way, the architects of 546 have paid very close attention to – even learned from – Symmetry’s lot out in Scarborough’s old suburban sprawl. Each of their three parallel, east-west blocks of housing offers a unique interpretation of its place. 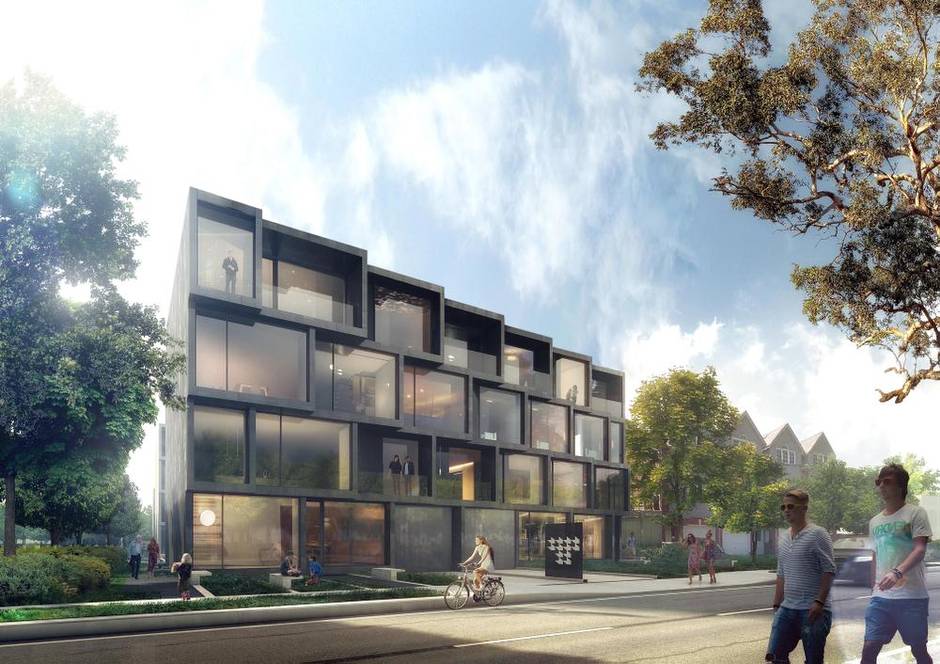 The expansively glazed, animated structure standing alongside busy Gerrard Street East, for example, is the most steadily focused building in the group. But it’s the public, streetside face that Tree House turns toward the city, so the fact that it behaves with a certain civic gravitas is appropriate.

The block at the rear (south) end of the site, on the other hand, takes its cues from the lot’s irregular shape, and from an eccentric little street that comes in at an angle, and dead-ends at the property line.

At least it’s supposed to end there. The architects of 546, however, have decided to welcome the odd, diagonal momentum of the street alignment and property configuration, instead of resisting these interruptions of the orderly, rectilinear city grid and plunking down three look-alike chunks of housing. The awkward angular push has driven the layout of a courtyard, and informed the striking form of the southernmost townhouse building, which zigzags off at a tangent from its two more staid companions.

But I don’t mean to exaggerate the formal variety here, or make Tree House seem eccentric. While each of the three blocks has a lively identity, the parts of Tree House certainly add up to an attractively coherent whole. The strategic idea that holds it together – stacking boxes – is one of the most venerable in the modern movement’s repertoire. But all modernist stacks are not created equal. There’s a world of difference, let’s say, between the routinized piling-up of exactly identical units in a warehouse – that’s how you get the dullest high-rises, but also starkly boring townhouses – and the inventive, push-pull play with variously defined oblongs that Tree House is about. 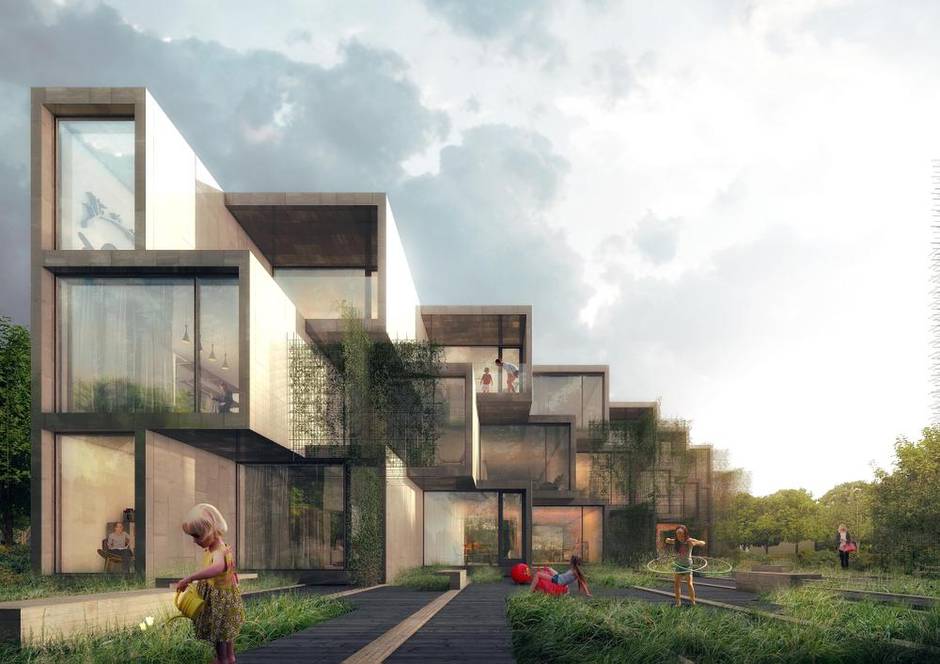 This play is nowhere more intense or interesting than in the southernmost of the three blocks. Here, the interiors of the three-bedroom townhouses – two in every vertical three-level segment – interlock ingeniously, like pieces of a Chinese puzzle, providing each family with formally distinctive living spaces on more than one floor. The entrances of both the upper and lower townhouses open onto the courtyard. The glass-faced interior volumes – some broad, others oriented upright – declare themselves on the exterior in a bold rhythmic motion, what Mr. Radulovic calls “staggered, cellular geometry,” that runs the length of the building.

The art of this development is robust, urbane, big-city stuff. Here, as in its work in Winnipeg, 546 has put the lion’s share of its considerable moxie into an arresting design, but one that can be translated into reality by the trades with entirely conventional materials and methods. The framework of these buildings will be wood, not steel. The walls, where they aren’t glass, will be clad with heavy aluminum panelling, in two tones of grey. Simple. Neat. And dumb, as the word is used in the saying “dumb is the new smart” – which means pretty darned smart indeed. 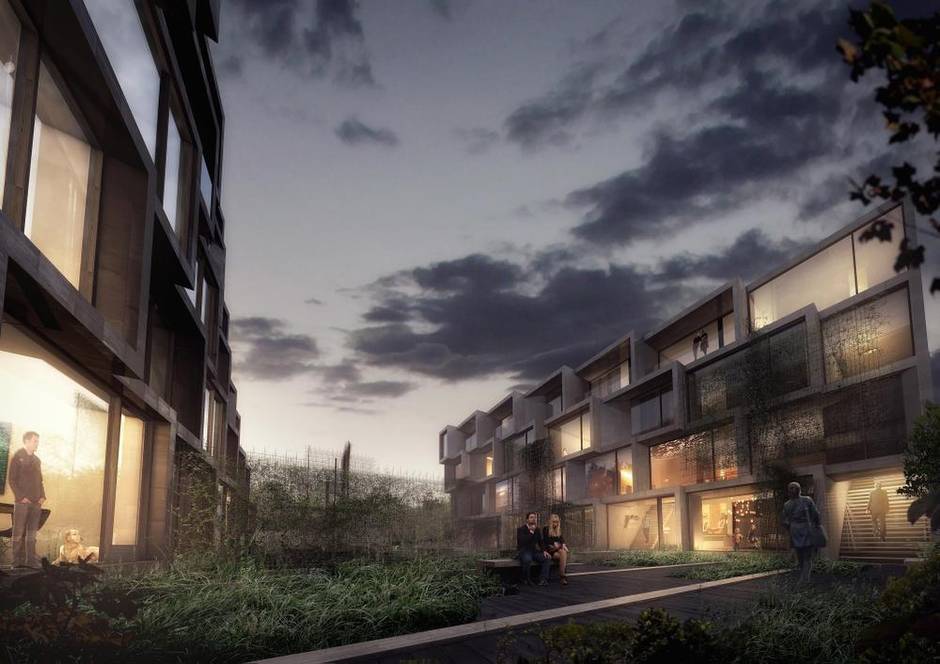 For the record: developer Sayf Hassan, of Symmetry, told me via e-mail that, in the block nearest Gerrard and the one in the middle, “all units will be a minimum of two bedrooms and two baths, with larger units having three bedrooms and two-and-a-half baths. Unit sizes range from 965 square feet to 1,220 square feet …”

Townhouses in the third structure, on the south side of the property, will vary in size “from 1,330 square feet to 1,610 square feet, and will all have at least three bedrooms, two baths and a den.”

Prices start in the mid-$400,000s. “Our intent with this project,” Mr. Hassan wrote, “was to introduce high-design modern townhouses at a price point that was comfortable for young families, first-time buyers and down-sizers.”