The continuing bustle of Toronto's downtown condo market suggests that many people like (or at least don't mind) living in inexpressive buildings. I'm talking here about the standard-issue residential slabs and point towers dotting the inner-city landscape.

The good lessons about sophisticated urban design taught by architect Moshe Safdie in Expo 67's Habitat hive of modular apartments have been largely forgotten, it seems. The façades of most recent residential towers, in contrast to Habitat, are sheer-sided escarpments of glass (or mixtures of glass and opaque cladding) that visually obscure the most basic structural fact about themselves: their character as stacks of small, discrete units of housing, each sheltering a unique person, couple or little family.

Balconies can signal that a condo building is something other than a big undifferentiated heap, but rarely do external features manifest the truth of the structure as a collection of individual homes.

Since the summer, however, I've come across a few residential projects that promise to break with the orthodox approach. It's probably too early to call greater expressiveness a trend in mid-rise and high-rise architecture – but something is definitely afoot in the Toronto marketplace

Were it done in a routine way, this structure would present a stolid, monolithic face to the city. Thompson Residences, however, works visually at two scales: that of the total block, but also that of the living units, which take the form of glass-fronted drawers, pulled in or pushed out in a rhythmic configuration across the building's surface. As design architect Gilles Saucier says, the façade's geometry is to be a celebration of individuality in the midst of an impersonal metropolis.

Then there is TAS DesignBuild's mid-rise apartment building called Duke, which is slated to go up in Toronto's Junction area, according to a plan devised by Quadrangle Architects. The Duke's façade will dodge in and out, as if chunks of material had been randomly sliced from it and lifted away. In this representation of every discrete condo unit in the exterior treatment, Quadrangle prompts the project to speak of itself as a vertical neighbourhood of individual homes.

Promising to be more artistically exciting than either Thompson Residences or Duke, however, is SQ, the first market-rate residential component in the extensive overhaul of Toronto's 18-acre Alexandra Park neighbourhood.

This 14-storey condo complex has been designed by Teeple Architects for Tridel Group of Companies, a mammoth supplier of apartments across the Greater Toronto Area and a partner with Toronto Community Housing Corp. in the Alexandra Park revitalization. SQ's 241 one-, two- and three-bedroom units are for sale at prices ranging from $334,000 to $647,000. A parking spot for a car will cost $45,000, but there will be a drive-in garage for bikes. For people who enjoy high-density downtown living with an edge, the project's location, steps away from the intersection of Queen Street West and Spadina Avenue, will be perfect.

Prospective home-buyers who appreciate contemporary architecture will also find much to enjoy here. Like the other buildings, only more so, Teeple Architects' scheme turns the residential fabric inside out, articulating the inner workings on the exterior surfaces. This lively formal pushing and pulling, accented here and there with subtle splashes of yellow, creates a variety of terraces and balconies that lend identity, and a sense of address, to the individual suites.

Stephen Teeple (who worked with project architect Martin Baron on the design) said that, when the plan passed before the city's design review panel, some members questioned SQ's high-voltage profile. They would have preferred the first private-sector intervention in otherwise low-income Alexandra Park to be more demure.

To be sure, the overall shape of SQ, like its façades, is rhythmically vigorous, rising by stages from a short element, through a mid-height level, to its full 14-storey stature. But it will go into an equally vigorous part of town – on the Queen Street strip, near Chinatown and the University of Toronto, and at an intersection served by excellent transit connections. Standing behind the low store-fronts of Queen West, the building should complement well the vivid, busy street life and appearance of its neighbourhood, and serve as yet another instance of expressive – and impressive – multi-unit residential architecture.

For one Toronto home, a tight squeeze turns into a tower of light
November 7, 2013 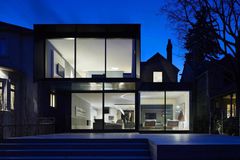 A year after Hurricane Sandy, Toronto architects design a home to endure
October 31, 2013 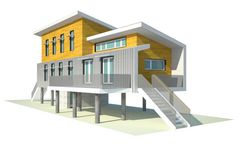