I was walking through Hall 15 of Euroluce – the Milan furniture fair’s massive biennial lighting expo – when a stunning display stopped me mid-stride. Arrays of steel branches sprouting luminous amber leaves burst down from the ceiling, sprawled throughout the space and dangled over the roof. Glimpsing the stand’s sign, I felt a surge of national pride. Here was Vancouver’s Bocci gloriously holding its own among the Artemides and Ingo Maurers of the world in its sophomore appearance at the invited exhibition this spring – the only Canadian exhibitor in the most elite (read: overwhelmingly European) lighting expo on Earth.

“I had no idea this would happen,” Omer Arbel says of his brand’s staggering success. Bocci celebrated its 10th anniversary this year and announced it would be opening a second headquarters, in Berlin.

With its blown-glass fixtures featured in high-design shops in 43 countries, Bocci is the paragon. But it’s not the only Canadian brand blowing up on the global radar. While we’ve never been famous for our lighting, a small but tenacious number of designers are elevating our national reputation for inventive fixtures. Vancouver’s Andlight, Montreal’s Lambert & Fils, and Toronto’s Castor are lighting up design fairs, while fulfilling orders for an expanding roster of international clients. It’s a tough market to crack, and how each has tackled the challenges of the Canadian lighting scene is exactly what makes them stand out: These studios are producing polished work through constant experimentation while conquering the full spectrum of brand building. 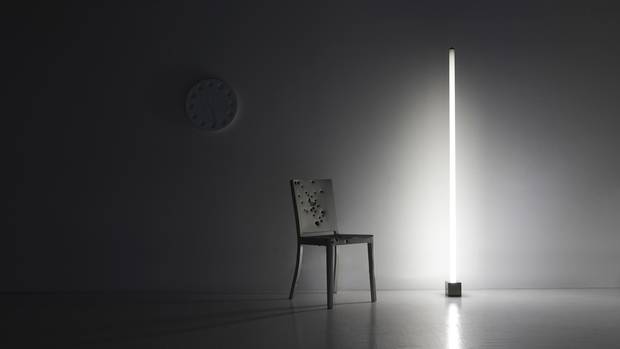 Castor, maker of the Induction Tube, is a Toronto-based company. Photo by: Castor

Just a year ago, Lukas Peet took the stage to accept the inaugural Emerging Designer award at the Design Exchange. The national recognition that came with the $10,000 prize helped the fledgling Andlight take off. Today, he, fellow designer Caine Heintzman and business manager Matt Davis deliver up to 120 fixtures a week, now that they are outfitting interiors (including Sai Woo restaurant in Vancouver and optician Bailey Nelson in Toronto) and shipping their first product showcase to the Klaus showroom in Toronto. Resembling blown-up versions of humble everyday objects, their designs have names like Button and Pipeline. Slab, the most inventive, is a flat acrylic panel ensconced in sound-absorbing felt except for its bright LED edge. It’s a sharp-looking lamp that also exudes a warm, hand-tailored touch.

Peet, who grew up in Canmore, Alta., and attended Design Academy Eindhoven in the Netherlands, was just lauded as one of seven Rising Talents at Maison & Objet Miami. He’s also collaborating again with hip New York brand Roll & Hill, which licensed his Rudi, a pendant shaped like a glowing super-sized paper clip.

There’s no conflict here with his own shop. “My success with other brands reflects on Andlight and vice versa,” says Peet. 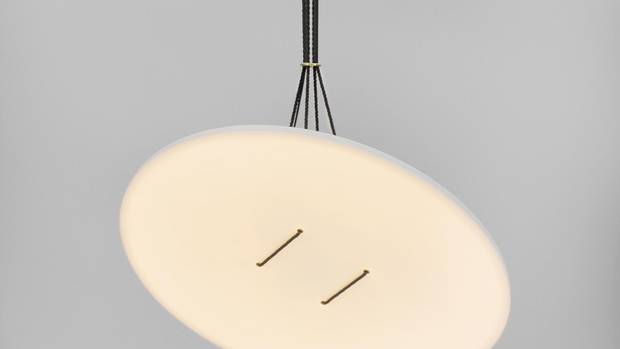 This collaborative attitude helps, as does a generalist focus. All of these designers also make furniture and accessories, since getting a lighting venture off the ground remains a tall order. “In Canada, we actually purchase more contemporary design than the States, but we’re 10 per cent the size of the U.S., so the demand is that much smaller,” Shauna Levy, president of the Design Exchange, explains. “So all of these brands work very hard, are incredibly smart and super-creative. It’s not ‘Let’s wait for it to happen.’” Because there are so few design manufacturers, Canadian industrial designers do it all, from creative conception and manufacturing to hauling their collections to expos around the world. Lighting designers have the added onus of meeting stringent rules for certification, which differ from one continent to the next.

Bocci produces all of its decorative craft pieces in-house; it also designs the electrical components, but those are made in arm’s-length partner factories. Lambert & Fils, like Andlight and Castor, prototypes its lamps in-house but uses sub-contractors to supply all the parts. “We’re all helping to grow each other’s businesses, it’s a wonderful thing,” Samuel Lambert says. At his boutique studio, he and his team of designers and artisans design and assemble the collection – which includes Beaubien, a sculptural line-drawing of a lamp – in a classic-contemporary style that resonates. “The volume of demand we have been getting from Europe, Asia and Australia has been growing steadily – over the past year, it has exploded,” he says. 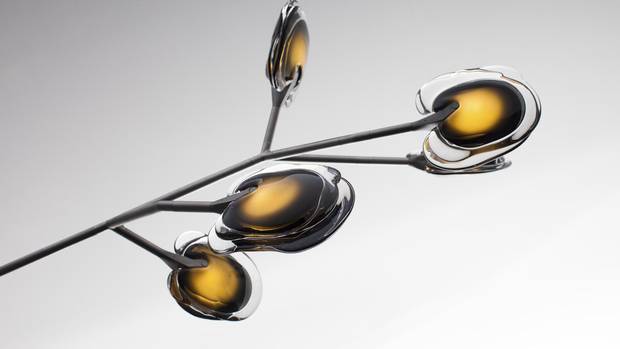 “I think we can easily say that it has doubled, if not tripled,” adds Christine Charette, his VP of operations and development. They deliver an average of 50 orders a week, from small “onesies” to larger installations. To meet the demand, the company launched an online store, strengthened its U.S. sales network and is now setting up its shop for CE certification to meet European standards. To bolster weaker sales at home, it approached LightForm, the Canadian retailer with flagships in Toronto, Edmonton, Calgary and Vancouver.

For Richard Assaly, LightForm’s founder, bringing Lambert & Fils into the fold as the only Canadian brand among a stellar cast that includes Baccarat, Flos and Moooi, was a no-brainer. “Their collection has a broad market appeal combined with a highly accepted design aesthetic,” he says. Assaly also likes that the product is affordable. (Lambert concurs: At the International Contemporary Furniture Fair during New York design week in May, “We saw a lot of dropped jaws when we told [show attendees] our price range.”) Thanks to LightForm, Lambert & Fils are now curating the lighting for a number of restaurants, including Social in Ottawa and Bauhaus in Vancouver. 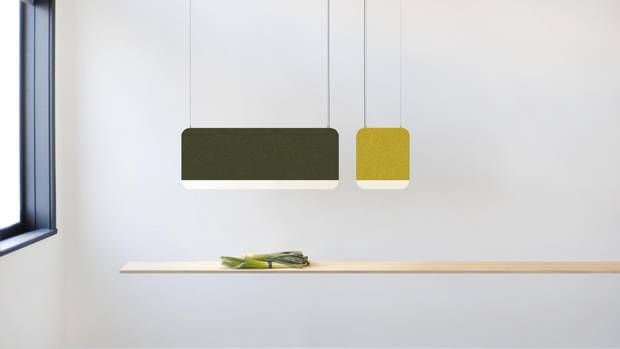 If it’s still premature to pinpoint a Canadian style, New York design week – where all these designers have exhibited – is a good indicator of what makes them stand out. While the most notable New York designers present lighting that’s equal parts cozy and rudimentary – very boho-Brooklyn – this new Canadian wave embraces invention over nostalgia. Take Bocci’s 73 series: When Arbel came across a ceramic fabric able to withstand incredibly high temperatures, he was, as he says with characteristic passion, “extremely excited.” His studio sewed the fabric into a bag and blew glass into it, unleashing an ethereal glass cloud. “I wanted that tension, between the soft and yielding form of fabric and the optical crispness and weight of glass,” says Arbel. Each gorgeous, unique vessel alchemizes the artisanal and the high-tech.

Even Castor, beloved for its hoser-chic chandeliers assembled from recycled tubes and burnt-out bulbs, has evolved. Last year at Intro/NY, an off-site New York show, the Toronto studio displayed Conic Section Light, a basket-like fixture in black powder-coated aluminum and steel that evokes the best offerings of Luceplan. Partners Brian Richer and Kei Ng sell most of their lights in Berlin, New York and L.A. – which Richer ties to the esoteric quality of their work. “When we’re in Milan, they say, ‘Oh, you must be from the Netherlands.’" In fact, this industrious company is growing in Canada, too, thanks to new investors. This will allow them to buy more parts – 500 rather than 100 – and lower the overall costs or making their brilliant fixtures.

What sets Canadian lighting apart is beginning to get noticed at home. It’s a great time to invest in our northern lights. 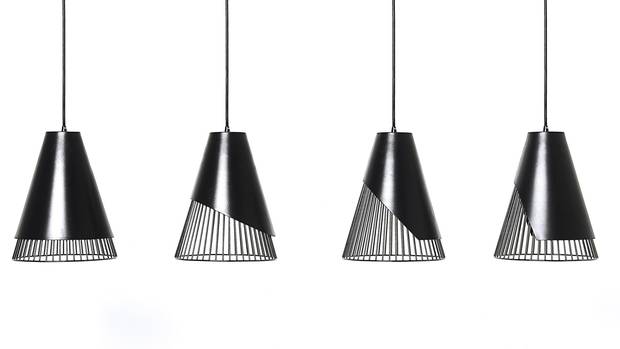 Conic Section Light designed by Castor
Follow us on Twitter @globeandmail Opens in a new window
Report an error Editorial code of conduct
Due to technical reasons, we have temporarily removed commenting from our articles. We hope to have this fixed soon. Thank you for your patience. If you are looking to give feedback on our new site, please send it along to feedback@globeandmail.com. If you want to write a letter to the editor, please forward to letters@globeandmail.com.
Comments