A Montreal company can stack the contents of a home – appliances, sofas, the works – onto a couple of bike trailers no bigger than a bedroom door. On a recent move, Robert Everett-Green enlists them to take his belongings for a spin 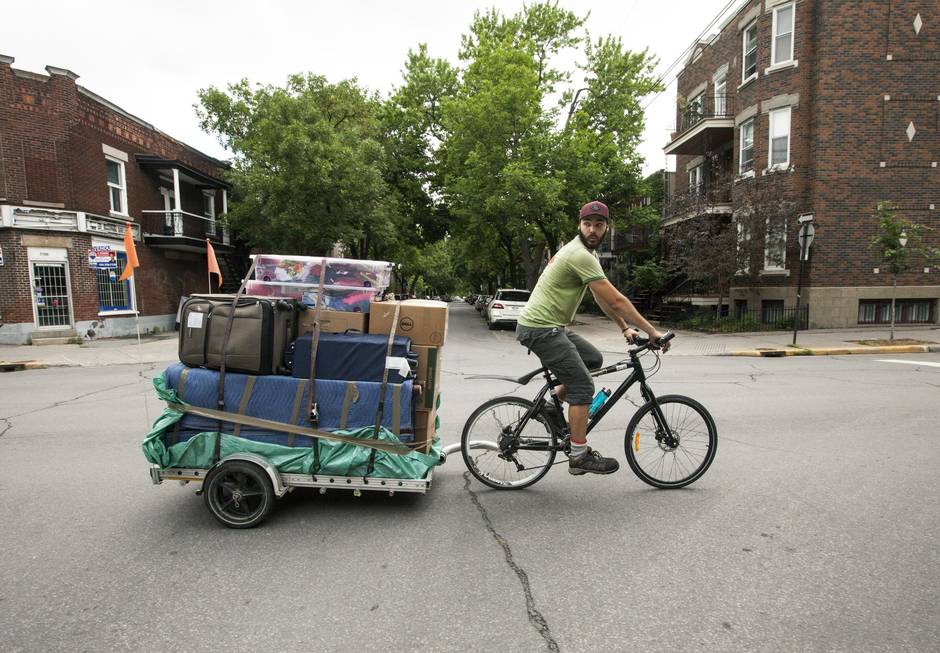 Nicolas Harvey of Déménagement Myette, checks the security of Nathalie Doummar's items as he bikes them over to her new apartment in Montreal. (Charla Jones for The Globe and Mail)

It was my girlfriend’s idea, or rather, her brother-in-law’s. Why add to global warming with a moving truck, they said, when we could hire guys on bikes to move all our stuff?

Yes, this is a thing in Montreal. The city with the best urban-cycling infrastructure in Canada also sustains a busy moving company that will drag almost all your movable possessions from A to B on bike-drawn trailers.

It’s called Déménagement Myette (DM), and in a few fascinating hours, it bundled up all our things and transferred them between our new and old flats in Verdun, a particularly bike-friendly district southeast of the city core. Not only did the experience give me an enlarged sense of what bikes can do, it also showed me something unexpected about how we perceive domestic furnishings.

The preamble was similar to that of any other move I’ve done. We got a competitive estimate, a date and some standard packing suggestions. I hadn’t seen the kind of gear DM uses, but in the few weeks till the movers arrived, I gave myself an idea of what it must look like. I imagined one flatbed trailer, about the size of a car, with a couple of bikes hitched to it.

This self-induced illusion of scale vanished when our movers, Didier and Alexandre, arrived. Their bikes, lying on the pavement outside, were attached to two separate trailers, each not much larger than a bedroom door. These were supposed to carry a couple of major appliances – typical moving-day cargo in Montreal – and a two-metre couch, as well as desks, chairs, tables and numerous boxes large and small. I began to imagine an odyssey of multiple trips, possibly stretching on till midnight.

Didier and Alexandre exhibited no concerns when we showed them all that had to go on their trailers. They began swaddling large furniture in the same packing blankets used by truck movers. On the sidewalk, they stacked these and other items on the trailers as efficiently as possible. As the piles of things rose above chest height, the pairs’ packing ingenuity became really impressive. It was like watching a championship round of Tetris, with real objects. 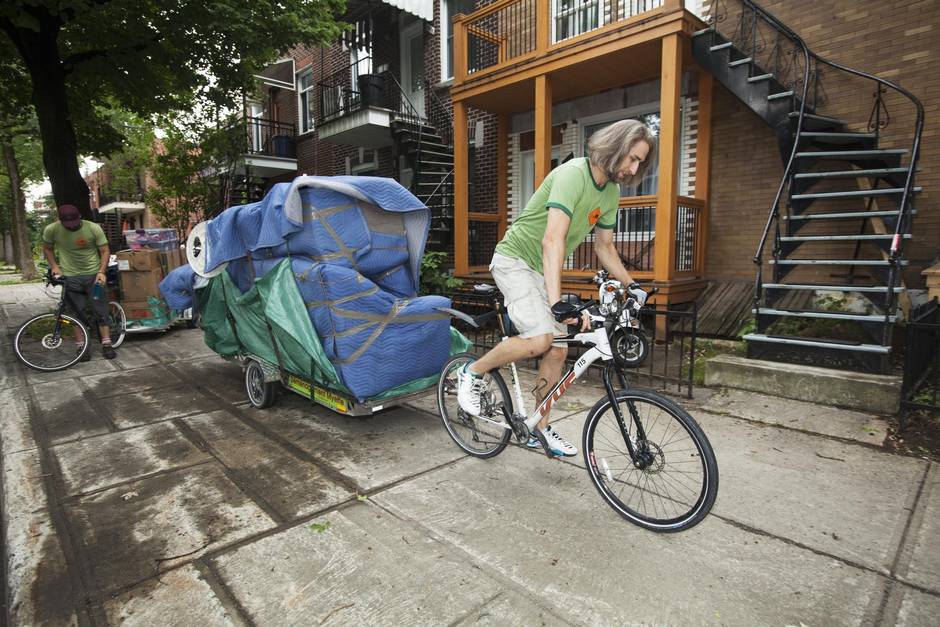 Matthew Gaines, a spokesman for DM, told me his bike teams move people all over Montreal, though most of the business is centred on the Plateau. His movers have no qualms about going long distances. The main restriction in that regard is price, because many moves take more than one trip. “It starts to become less cost-effective,” he said. The sensible maximum is about 15 kilometres.

Montreal has a few punishing, long hills, but those don’t worry DM cyclists either. “Very often we can find a way around the hills, and most of the time the difference is only about five minutes,” Gaines said.

DM has six teams of bike movers, capable of doing a dozen moves a day, Gaines said. Usually three or four pairs are at work on any given day, though the whole squad will be active on and around July 1, when Montrealers change apartments in huge numbers. Bike moves go on for eight months of the year, then DM switches to a truck it rents from Cyclo Nord-Sud, a not-for-profit Quebec organization that overhauls used bikes and ships them to communities in developing countries. 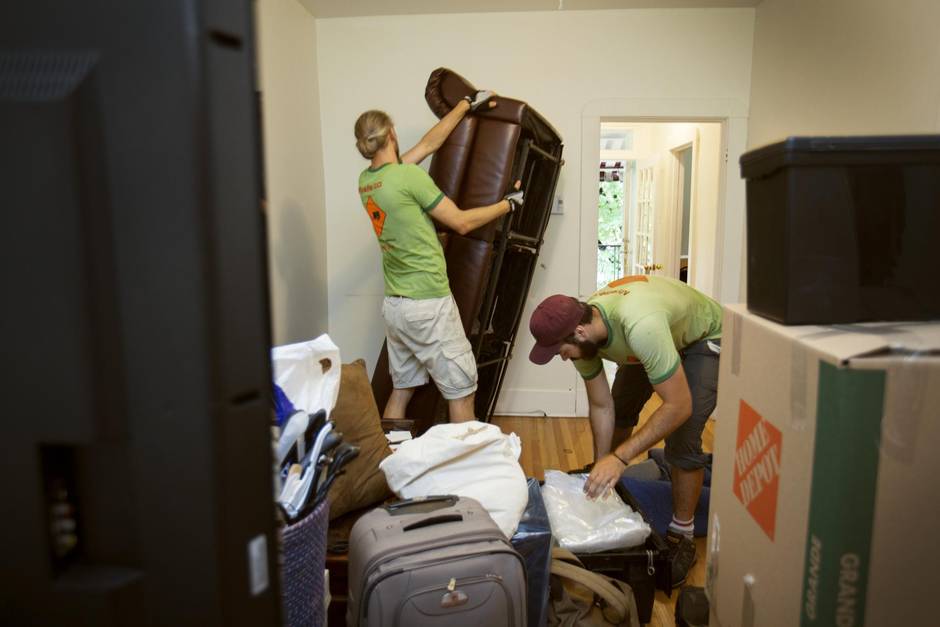 DM’s trailers accommodate about 270 kilograms or three to four cubic metres of cargo. The only household object the company won’t touch is a piano. Didier also said no to my girlfriend’s double-manual French harpsichord, for insurance reasons. No problem – a professional instrument mover seemed a better bet than propping this fragile keyboard on an open trailer.

As the mountain of things on the trailers in front of our house grew taller than the men loading them, I took another look at these vehicles’ narrow wheel base. Would all that stuff stay put during the journey? I imagined the couch, now stacked upside down on top of the washer and dryer, toppling onto the street as the bike rounded a corner.

Passersby, however, were delighted by this virtuoso display of totesmanship. Several snapped pictures. At least one asked Didier for his card. Others congratulated our movers, and us, for doing our part to save the planet. 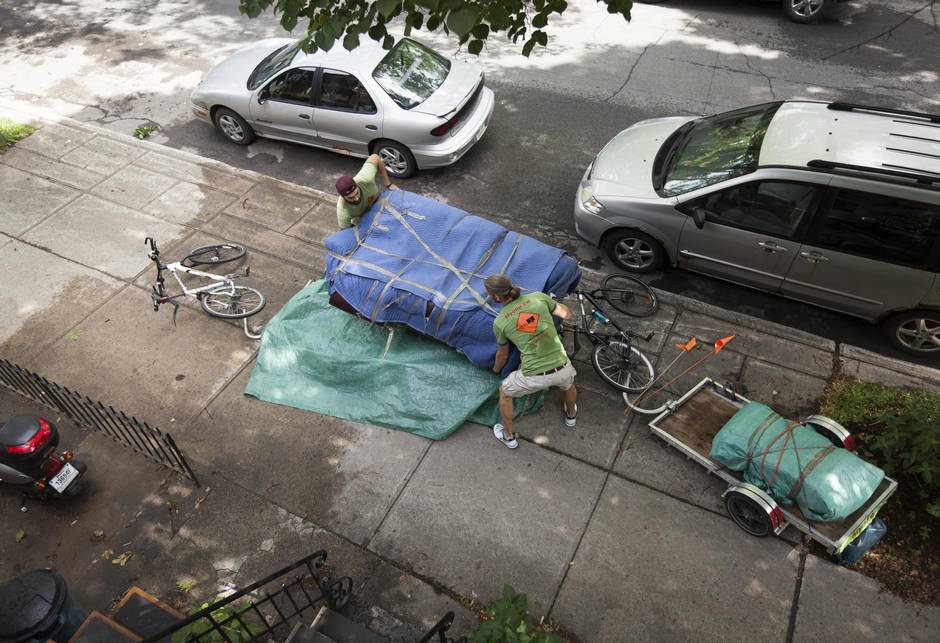 Nicolas Harvey (left) and Clement Coste (right), of Déménagement Myette, carefully place and arrange Nathalie Doummar's items on a wagon for transportation to her new apartment in Montreal. (Charla Jones)

My neighbours’ interest made me aware of another difference between a bike move and a regular one. Some of our things, including chairs and tables, went on the pile more or less unwrapped, with surfaces exposed and legs sticking out. The material substance of our domestic life was on view in a way I hadn’t anticipated. I was reminded of photos of people fleeing some trouble spot with whatever they could load on their horse-drawn or man-drawn wagons. I realized to what extent a moving truck is also a temporary shelter, which hides things that are normally concealed from public view. I don’t usually think of a table and chairs as having anything to do with my feelings of privacy, but suddenly, they did.

With the trailers loaded, Alexandre and Didier tied everything down with heavy straps and wrapped it all in several metres of packing tape. They picked up their bikes, stood on the pedals, and slowly the masses began to move. Each rider made a wide U-turn, as if to show that nothing was going to tumble down, and then headed slowly up the road. 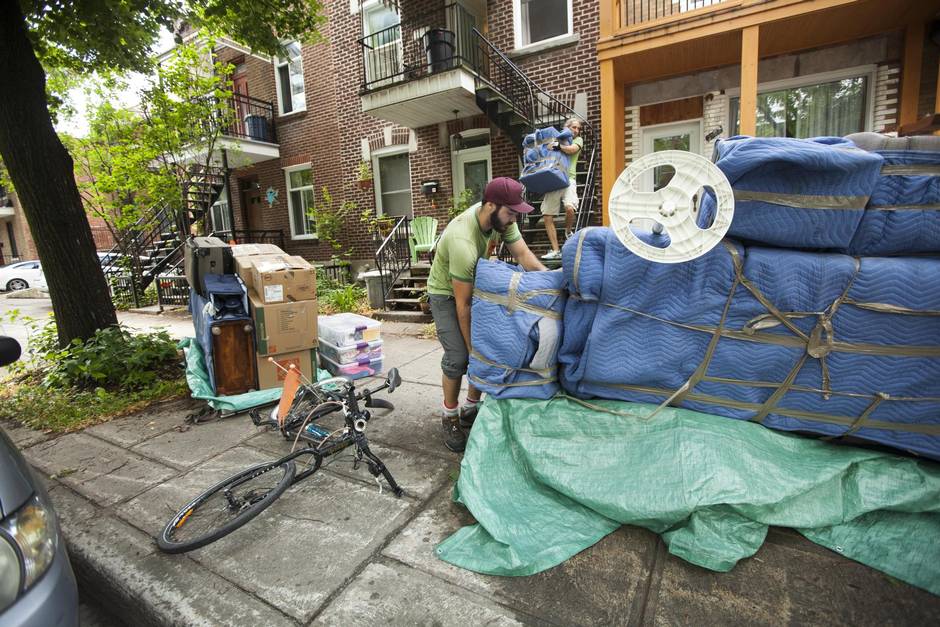 Clement Coste and Nicolas Harvey, front, of Déménagement Myette, carefully place and arrange Nathalie Doummar’s items on a wagon for transportation to her new apartment in Montreal. (Charla Jones)

We followed by car. The trailers took a twisting path, as the riders steered around cracks and potholes. It looked a bit precarious, from inside a closed vehicle, but nothing fell off and nothing was broken. The move took two trips and ended on time. Didier and Alexandre unloaded everything into the right rooms, and pedalled off to do another move that afternoon.

Our move was short, so the amount of fossil fuels actually saved was minimal. But among my house-moving experiences, this was one of the best and certainly the most memorable. I would do it again, with fewer qualms.