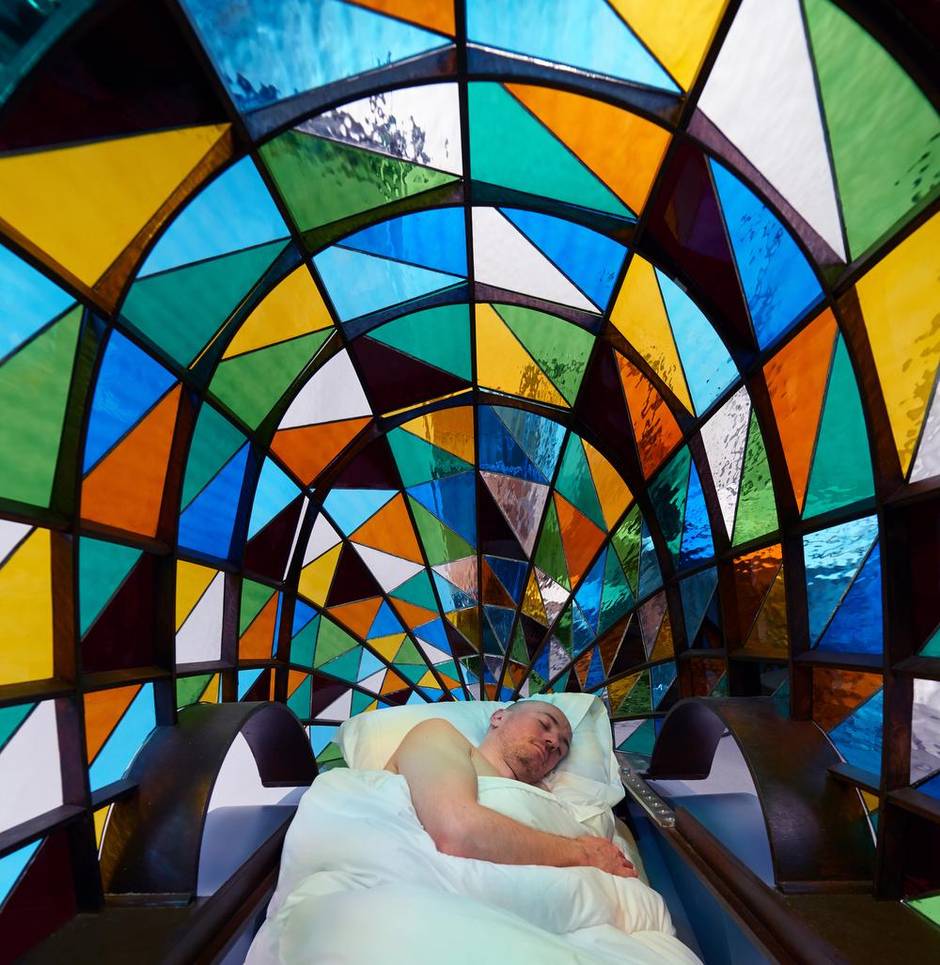 Since the end of the 19th century, when cars were first invented, automotive engineers have been pushing to take the risks out of driving. Inventions such as seat belts and airbags have helped. But one of the most revolutionary advances in crash-proofing might be to remove the driver altogether, with autonomous vehicles, such as the ones currently being developed by Google.

If the cars aren’t prone to human error, because they’ve been programmed to sense when they’re getting too close to one another or going too fast into a turn, road fatalities might be as bygone as the Ford Model T.

If that proves to be true, then the shape and look of a car can radically change – at least that’s the hope of British designer Dominic Wilcox. At the London Design Festival last month, he unveiled a prototype for an autonomous car that is so optimistic about its own potential for safety that its shell is made from delicate stained glass and its interior repurposed into a rest and relaxation zone – bed included.

“Extrapolating from where we are now, the cars should be super safe. There might even be roadways that only have driverless cars,” Wilcox says. That will allow the designs to securely accommodate us “when we are at our most vulnerable, when we are asleep.” 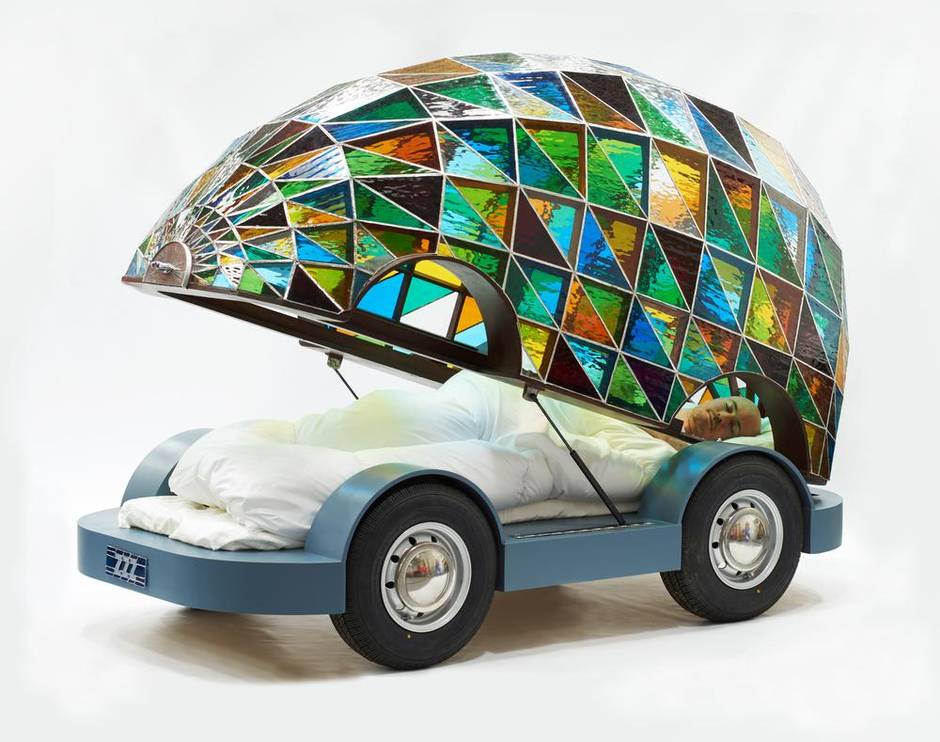 Wilcox, who is known for thought-provoking design ideas – including GPS-enabled brogues – doesn’t anticipate that the design will be implemented until 2059. “The technology is moving along rapidly,” he says. “But it has to prove itself to be safe and reliable first.” When it’s ready, the Royal College of Art graduate is also anticipating that our tech-laden lives will make us crave something, ironically, old-fashioned.

“Technology tends to be slick and polished,” he says. “In the future, I think things that are handmade will become more relevant. Specifically because handmade things aren’t perfect. They have a character that can’t be replicated by machines, which make everything too perfect.” 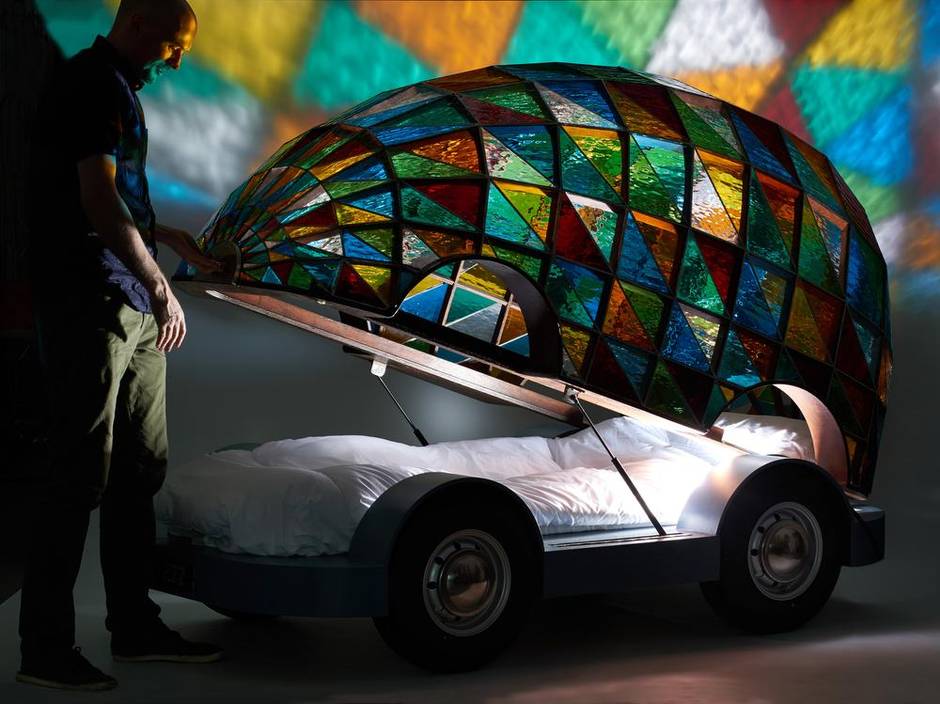 The glass was all hand-cut and soldered onto a wooden frame. The panes were then attached to a metal Mini chassis that would hold the car’s engine and sensors. By blending the very old with the not-yet-realizable, it doesn’t feel like a confused throwback or some kind of strange pastiche – it all seems new and exciting.

Not that all the autonomous cars of the future will be sleepers. In addition to a future where people no longer drive themselves, Wilcox envisions a future where we no longer own cars at all. Instead, we’ll order up rides from elaborate, roving ride-share programs. Maybe we’ll need a single-person bed-car one day, then the next we might require a six-seater with a Jacuzzi or a kitchenette or a small boardroom. A visitor to the London Design Festival even suggested that Wilcox consider autonomous kennels to ferry around dogs. Of course, much can happen between now and 2059, and Wilcox acknowledges that his proposal is less about making something saleable and more about “demonstrating the potential of a system.”

That said, there’s something infectiously optimistic about it. Who wouldn’t want to rest up in a mobile, meditative, handmade jewel box that would feel as dreamlike inside as a Chagall painting? 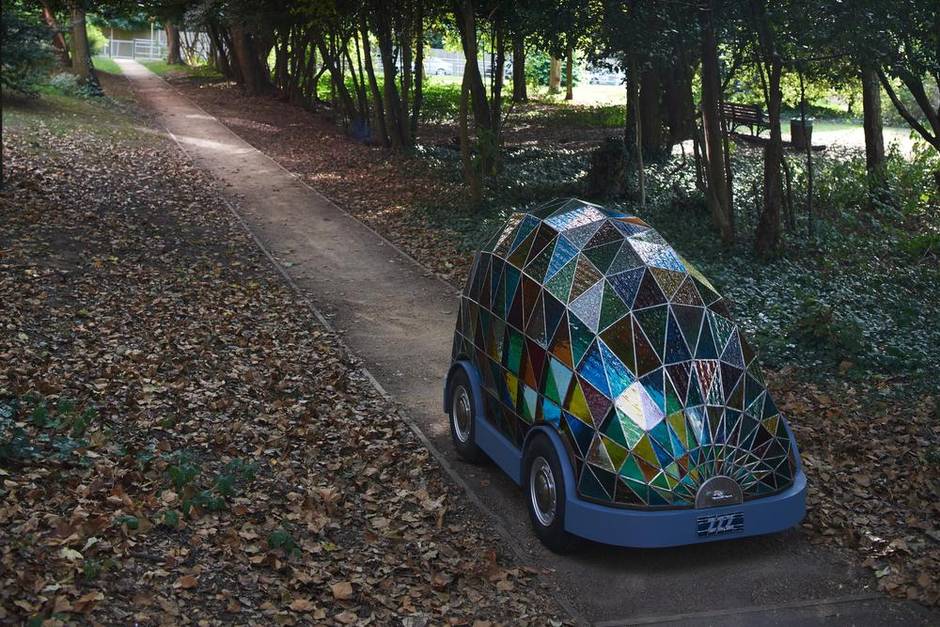