This fall and winter, hundreds of young Canadians will go to We Day events across the country. The annual event is part of We Charity and is a celebration of social activists, speakers, musicians and young people who have made a difference in their communities. We spoke to five young Canadians who'll be at one of the We Days about their charitable contributions, which reflect their personal passions and the changes they hope to see in the world.

The 16-year-old student from Laurier Macdonald High School in Montreal has put her charity focus on raising money for clean water in Ecuador. "As humans, we need water to survive," she says. "The fact that thousands of people drink unfiltered water because that's all they have, and then become ill, was and still is an awful thought for me to have."

This year, Ms. Boulanger set a goal to raise $600 through a dinner and dance but had a tight deadline. "I decided to have the event named Eat for Ecuador for Valentine's Day; however, I thought of this idea two weeks prior to the fundraiser, and one of those weeks was a school exam week."

Calling it one of the best moments in her life, Ms. Boulanger ended up raising $2,000 in those two weeks and is planning more events. She's going to raise funds for the Canadian Cancer Society by having bake sales throughout November and host another dinner on Nov. 17, where she also plans on shaving her head and donating her hair. The proceeds from the dinner event will go to We for education in Haiti.

Ms. Zakaria's love of making soap went from an activity she did with her mother to the foundation of her charity work. The Grade 12 student at Branksome Hall in Toronto has donated her soap to charities including AidSyria Canada, the Native Women's Resource Centre and Me to We.

"I started a fundraiser with Me to We to build a school in Ecuador," says Ms. Zakaria. "I understand and realize that education is the basis of change. Education to me is the most important pillar, because with it we have had the power to solve many First-World problems like health and clean water, both of which are limited in Ecuador."

Her soap has taken her to different parts of the world including the Amazon and Jordan, where she and her mother visited Syrian refugees. They flew over during Ms. Zakaria's March Break and donated the soap to an organization called the Family Guidance Center. "I was touched by the grateful smiles on their faces," she says. "These experiences have fuelled my ambition to continue to make soap and continue to fundraise and raise awareness regarding several charities. By finding a creative passion of mine, I am glad to be able to share my soap with others."

The 17-year-old from Brampton Centennial Secondary School in Brampton, Ont., is taking on a major goal – ending negativity in the world. "I see it everywhere from social media to simply in-person, and it's always bothered me so much that not much was being done to combat it," he says.

Mr. Khan's response was to start The Positivity Project, which grew from his own frustrations of sending a card to a distant friend who was suffering from mental illness. He found the process costly and time-consuming.

His startup creates a postcard for customers who want to send a positive note to a friend, strangers at a randomly generated address, or charities. Cards cost $3 to Canadian and U.S. addresses, $4 to elsewhere in the world. "By making it easier to send positivity, I really hope to combat the negativity out there in our world today," he says.

Profits from the cards sent to the charities go to those charities.

Starting his business was met with, well, negativity. Mr. Khan says many people told him being an entrepreneur while still in high school was impossible, and his idea didn't have potential. "But I knew that if I was able to do something like this and make it all happen," he says, "I could inspire so many others who have given up in the past to get back up, dust themselves off, and continue to pursue their passion to make the world a better place."

The 14-year-old student at Yorkton Regional High School in Yorkton, Sask., had always been troubled that some people could not access clean water when all she had to do was turn on a tap. "If I wouldn't drink dirty water, I don't think that others should have to either," she says.

When a teacher at her previous school, Yorkdale Central School, asked her to lead the Water Walk group through the We organization's We Act, Ms. Korol took up the challenge.

The Water Walk, which she led with a friend, replicated what it's like to live without adequate, clean water. Students walked for two kilometres to a nearby lagoon, filled their water bottles at a water station, walked back and then used only what's in their bottles.

Water Walk wasn't Ms. Korol's first charity fundraiser. When she was younger, she was given a class assignment on Nigeria. Her research fascinated her. She dove into Nigeria's culture, learned how to make one of the country's dishes and sold it as a fundraiser where the proceeds used to purchase livestock through the We website.

Since joining We Act, Ms. Korol has also put up Christmas decorations at seniors' homes, sold rafikis and helped to run a school breakfast program.

With her move to Yorkton Regional, Ms. Korol is already looking for new opportunities. "I hope to find a program there that I can continue to work with and make a difference," she says. "I want to become a leader in my new school and find a way to make a positive change in my community."

They've been raising money to buy goats for the past two years through bake sales and running their school canteen.

They were inspired when Ms. Sveinson saw a little bag attached to their school's bulletin board. For a $2 donation, a family in an impoverished country would receive a goat.

She went to her friends and the four girls immediately agreed that their canteen money would go toward buying goats. Their next step is to raise enough money to buy 20 goats in the next two years.

"Our biggest obstacles were our negative customers," the girls explain in an e-mail. "We just ignored them."

They're looking forward to We Day in Winnipeg and getting new ideas on how they can help people. 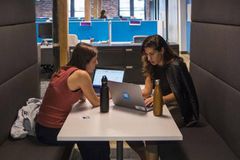 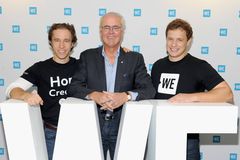 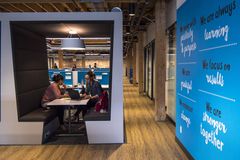