Adventure Canada has offered expeditions through Canada’s Northwest Passage since 2009. If you board their 137-metre Ocean Endeavour thinking you’re in for the marine equivalent of a walk in the park, you’ll quickly learn otherwise 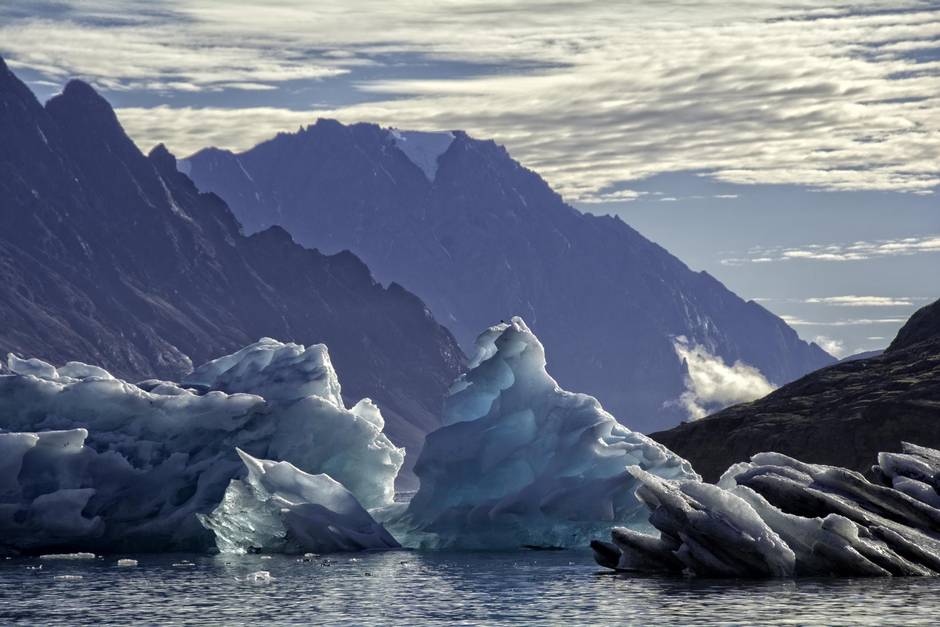 “We don’t know how long this will keep up,” admits our expedition leader when we gather in the ship’s lounge for a weather update. “It’s not quite hurricane force, but it’s definitely a good gale.”

Outside, waves explode over the ship’s bow and a falcon has taken refuge in a sheltered spot on the top deck. “We can’t go straight into the swells, so we’re zig-zagging,” explains Jason Edmunds. “And avoiding a lot of icebergs.”

If any of us boarded the 137-metre Ocean Endeavour thinking a voyage through Canada’s Northwest Passage and down the coast of Greenland would be the marine equivalent of a walk in the park, we’ve quickly learned otherwise. A voyage here – don’t call it a cruise – is still a very big adventure.

The company we’re travelling with, Adventure Canada, has been offering expeditions through the Northwest Passage since 2009. Its 198-passenger ship has a ice-strengthened hull but it’s not an icebreaker. We have a tentative route and we know when and where we’re supposed to go ashore, but the truth is, we’re just as dependent on the weather as the early explorers.

Our trip begins in Kugluktuk, in the western Arctic, in mid-September. The tundra is a burnt orange and the temperature hovers just above freezing. Winter is clearly coming, yet September is still the best month for travelling by ship in the Arctic. It’s the sweet spot when much of last winter’s ice has melted and new ice hasn’t started to form.

Our buoyant mood at the beginning is boosted even higher when Jason interrupts lunch on the second day with an unexpected announcement. “It’s been reported today that the Franklin ship, the Terror, has been found.” 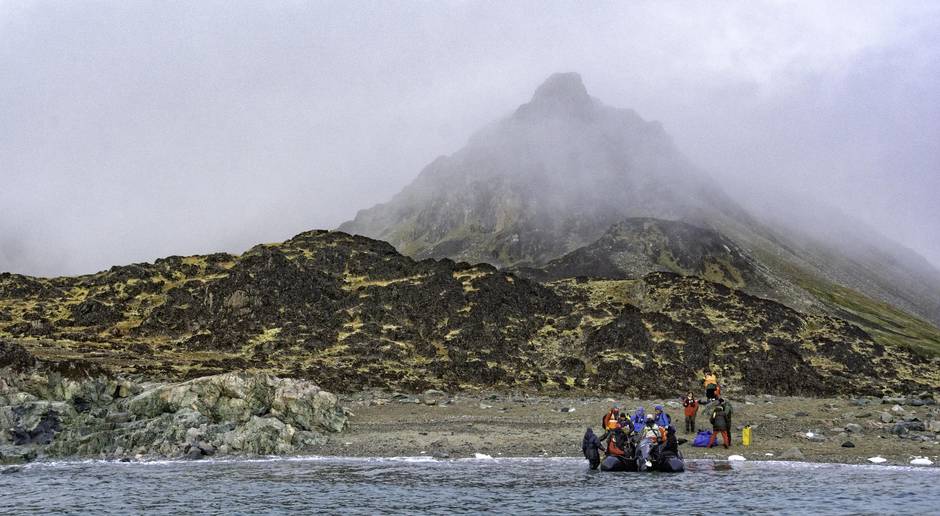 There’s silence, then an audible gasp.

At three o’clock the next morning, a few of us set our alarm clocks and go on deck to raise a toast to Sir John Franklin as we sail between the Terror and his other ship, the Erebus, discovered a couple of years earlier.

Then our luck changes. The wind howls, rain turns to snow, and the outside handrails become sheathed in ice, like an artist’s rendering of those God-forsaken, 19th-century expeditions where the ships become trapped in ice.

For the next 2 1/2 days we don’t leave the ship. We lurch through hallways, sit through back-to-back lectures and eat too many cookies out of boredom. Unless we’re seasick, of course, and then we don’t eat anything. At night, we sleep fitfully, rolling in our beds with the waves, the clanking of metal waking us.

“Ayurnarmat,” says Edna Elias, former Commissioner of Nunavut and one of the Inuit cultural interpreters on board. “Elders say ayurnarmat, it can’t be helped,” she explains, when we learn we won’t be going ashore at Gjoa Haven because of the 50-knot winds. Gjoa Haven was a place we were looking forward to visiting for its Inuit carvings and historical connections – it’s named for Norwegian explorer Roald Amundsen’s ship (he wintered there twice on his historic first traverse of the Northwest Passage between 1903 and 1906).

Ayurnarmat is a word we’ll master by the time this trip is over. 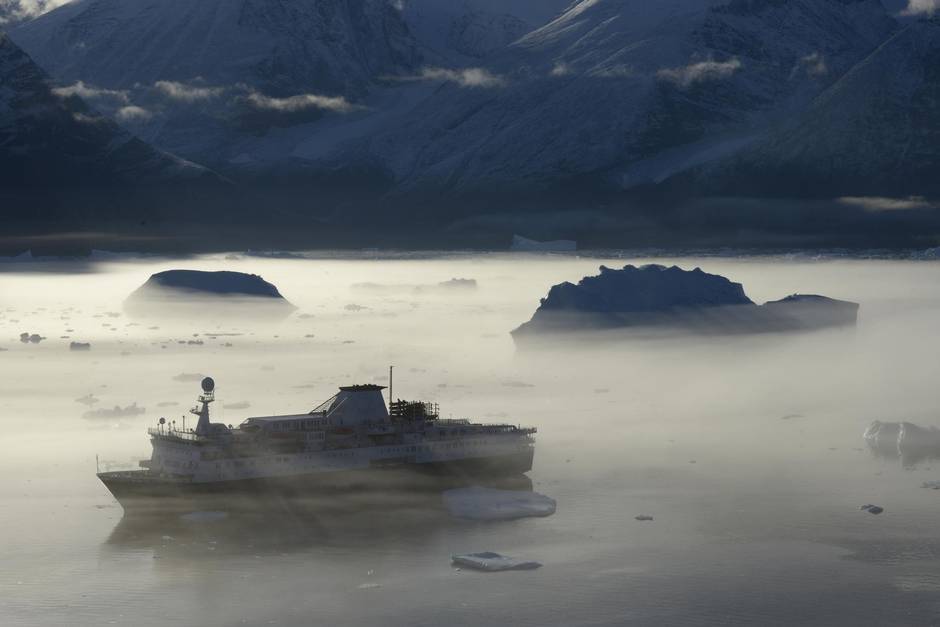 Entering Bellot Strait we reach the northernmost tip of the North American continent. At its eastern end, the Hudson’s Bay Company built its last trading post – Fort Ross – in 1937. When the wind subsides, we go ashore by zodiac and explore the old store and the former manager’s house, where paper peels from the walls and snow drifts artfully across the floor and furniture. But mostly we walk, enjoying the room to roam and the strange sensation of solid ground underfoot.

Back on board, ice becomes an issue. Plans to anchor overnight in Erebus and Terror Bay off Beechey Island are scuttled. “It would be unlikely we would get trapped in there, but we’re not going to take the chance,” Jason tells us during a weather briefing, pointing to “red ice” on the latest chart, indicating a dangerous amount of year-old ice that’s moving with the wind and currents. (Viewing these charts becomes a fascinating part of each day, along with learning the lingo. Not only is there red ice but old ice, young ice, fast ice and rotten ice become part of our growing vocabulary.)

Instead, we anchor outside the bay and venture in for a few hours the next day. Once ashore, we somberly inspect the graves of three of Franklin’s men, who succumbed to pneumonia and tuberculosis. But instead of feeling forlorn, this windswept hillside feels wonderfully serene. Turquoise ice floes bob along the shoreline while grey clouds gather dramatically on the horizon. We trudge through deep snow in single file with almost military precision, appearing – I imagine – a little like Franklin’s crew out for a walk when they wintered here in 1845-46, when they were still hoping to find the fabled passage.

Another day, we go ashore at the former RCMP outpost at Dundas Harbour on Devon Island, reported to be the largest uninhabited (by people, that is; there are plenty of muskox) island on Earth, and we learn a new word: katjaarnaqtuq, for “it’s beautiful.”

But more exciting than any history is the wildlife we encounter, especially the polar bears. Early one morning in Lancaster Sound, we throw parkas over PJs and hurry onto the ship’s decks. A short distance away, a solitary bear walks across a large, slushy ice floe before digging a hole in some snow and curling up like a big baby. 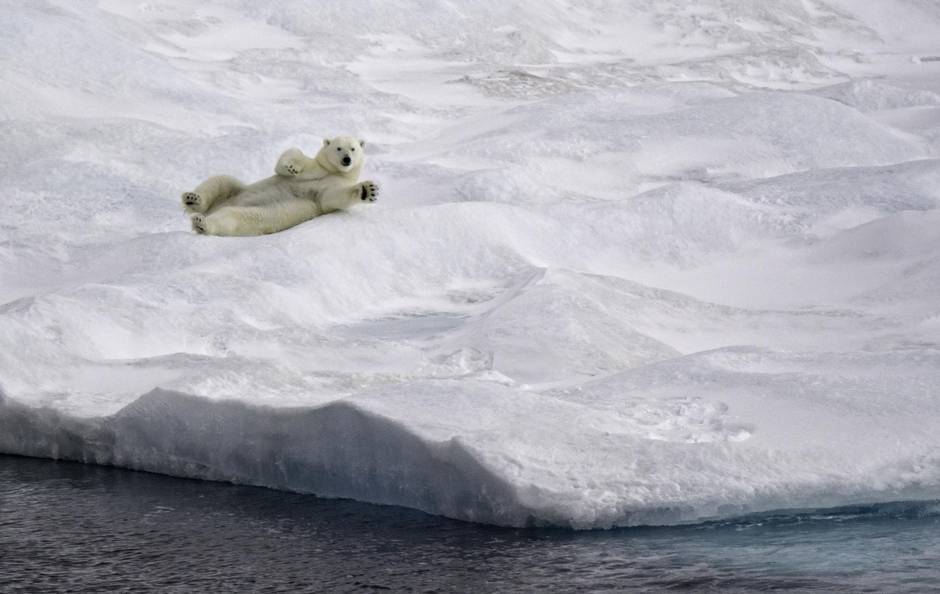 Early one morning in Lancaster Sound, a short distance away, a polar bear was spotted walking across a large, slushy ice floe before digging a hole in the snow and curling up like a baby. (Dennis Minty / Adventure Canada)

Another morning, someone spots a bear on what looks like a floating island of giant-sized ice cubes. This bear is endlessly entertaining; climbing over the ice, falling into the water, climbing back on, eating snow, rubbing her backside and lifting one hind leg to her face in a deep stretch. We ooh and aaah in appreciation.

But amusement turns to disappointment the following day, when we learn that ice is again playing havoc with our plans. We won’t be visiting Grise Fiord, Canada’s most northern community. This same ice that we know is disappearing from the Arctic at an alarming rate is now most unwelcome. (“Go to your investment banker and divest of anything to do with hydrocarbons,” polar researcher and filmmaker Stephen Smith tells us during a lecture.)

Yet what’s been remarkable from the start of this voyage is people’s acceptance of whatever comes our way, be it fog, wind, snow or ice; sometimes all four at once.

Our patience is partly due to Jason’s unflappable flexibility (We’re not going to Grise Fiord, but guess what? The community of Arctic Bay is welcoming us instead!) and the crew’s resourcefulness in educating and entertaining us, day in and day out. One night, we celebrate our favourite figures in Canadian history and – to our great hilarity – Newfoundland author and crew member Michael Crummey dresses up as Margaret Atwood, who herself has been on four Adventure Canada expeditions through the Northwest Passage. 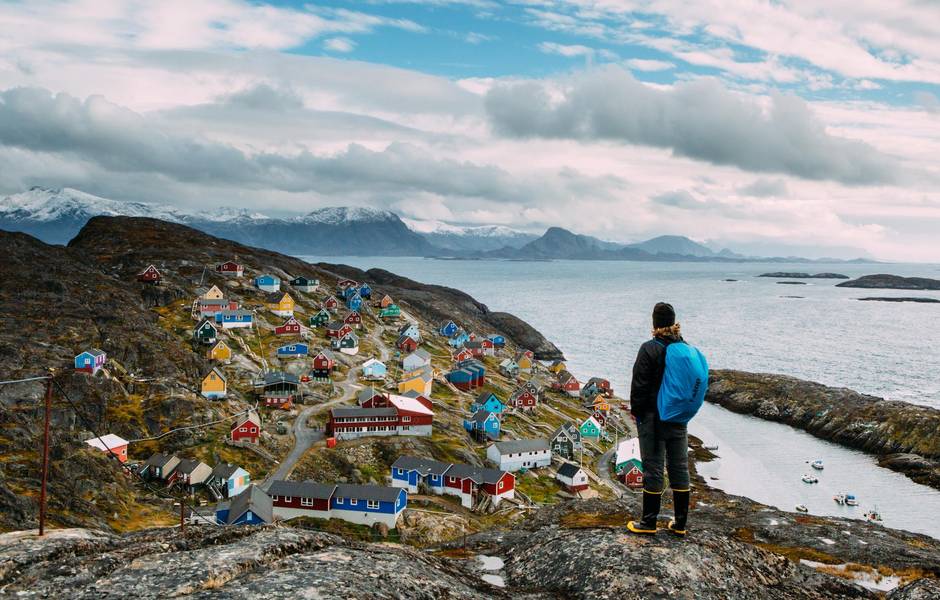 Looking over a village on a voyage through the Northwest Passage and down the Greenland coast. (Scott Sporleder / Adventure Canada)

And who can deny that the often-foul weather we’re experiencing produces the most magnificent panoramas? Crossing Baffin Bay, I stand on deck for hours, mesmerized by the moody sea and sky.

Then, suddenly, the weather clears. Half a dozen king eider ducks herald our arrival at Upernavik, on Greenland’s West coast, a town of colourful houses overlooking Davis Strait. Further south, we spend an entire day in Ilulissat, where a few of us rent bikes from the ship and cycle to the Ilulissat ice fjord, a UNESCO World Heritage Site.

“Every time I come here it blows my mind,” says David Reid, one of the ship’s crew. The polar adventurer came to Canada as one of the last group of Scots hired by Hudson’s Bay Company in 1989. The Ilulissat glacier is the most productive glacier outside of Antarctica, giving birth to 90 per cent of the icebergs that travel down the coast of Newfoundland and Labrador. “Look at that,” Reid says, as we admire the ice-jammed fiord. “Beautiful.”

That evening, we cruise by zodiac amongst the towering icebergs floating in the bay. We’re dwarfed by their size and splendour, awed by their frozen majesty. As if on cue, three humpback whales break the surface, their noisy exhalations like misty exclamation marks.

Like the Inuit and the explorers who’ve gone before us, we’ve learned not to take anything about the Arctic for granted.

So on our last night, when the black sky shimmers with a green aurora from one horizon to the other, we feel fortunate indeed. The voyage has been everything we hoped for – with a good dose of authentic Arctic weather to boot. 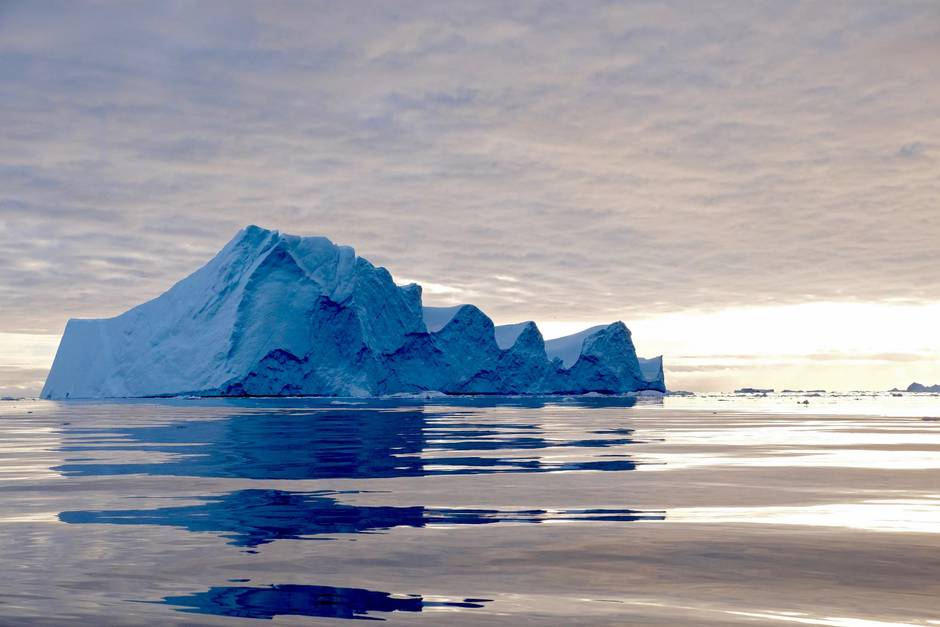 Adventure Canada offers two trips through the Northwest Passage each year, in addition to other destinations.

Rates start at $8,995 (U.S.) a person, which includes all meals, onshore adventures and on-board programming.

There’s no single supplement for most categories of room. Guests under 30 qualify for a 30-per-cent discount.

Rental bicycles are available on-board and are a great way to explore when you go ashore. adventurecanada.com

The writer was a guest of Adventure Canada. It did not review or approve this article.