It’s a cloudless Edinburgh morning, but I’m in a hurry, oblivious to the sun’s rare brightness and warmth. My train is leaving from Waverley Station at 10:20 a.m. – sharp. As one rail manager told me: “We’ve waited for this moment for 46 years and eight months. We won’t wait any longer.”

“This moment” refers to the reopening of the Borders Railway, closed in 1969 in a spate of cuts that shut down one-third of the British network. Travellers had abandoned the trains in droves, favouring the motor car, which promised freedom and flexibility.

Yet the Waverley line from Edinburgh to Carlisle was a cut that really hurt. Its closing left the Scottish Borders as the only British region without any train service. Demonstrations and protests started almost immediately and persisted for decades – until they succeeded. Well, partly, since the new tracks have been laid for only 50 kilometres to Tweedbank. 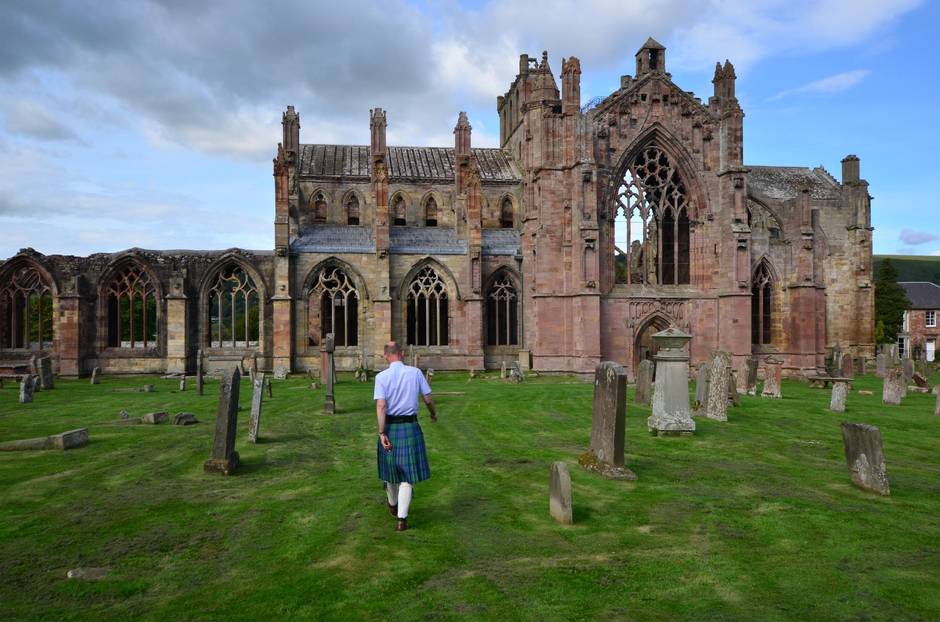 The ruins of Melrose Abbey, in southeast Scotland, are the burial place of the heart of Scottish warrior king Robert the Bruce. (Photos by John Malathronas)

Fast-forward to 2015, and I’m sitting in the first train out of Edinburgh on the recommissioned Borders Railway with some very excited Scots. Once we cross the city limits, Scotland’s industrial past is there for us to see in all its glory. Those lovely grassy mounds on the left are not the romantic rolling hills of Northern England; they are prettified slag heaps in disguise. We’re in coal mine territory.

A seven-minute path from Newtongrange Station leads to the National Mining Museum Scotland, housed on top of a pit closed in 1981. Here, old miners recount some of their memories and take visitors down to the coal face for a tour tinged with wistfulness and nostalgia. A well-maintained model railway by the gift shop illustrates the wrench that the mining communities felt when the line closed; the lack of rail transport made some pits more uneconomical than others.

As we near the Scottish Borders, the landscape turns more idyllic. Thickets of beech, pine and ash, underscored by brownish bracken and fronds of lady fern, begin to encroach on the line. We pass next to a farm set amid bursts of purple heather and touches of yellow gorse. Sheep run away from the new iron monster; they won’t take well to the steam locomotive scheduled three times a week during the high season. 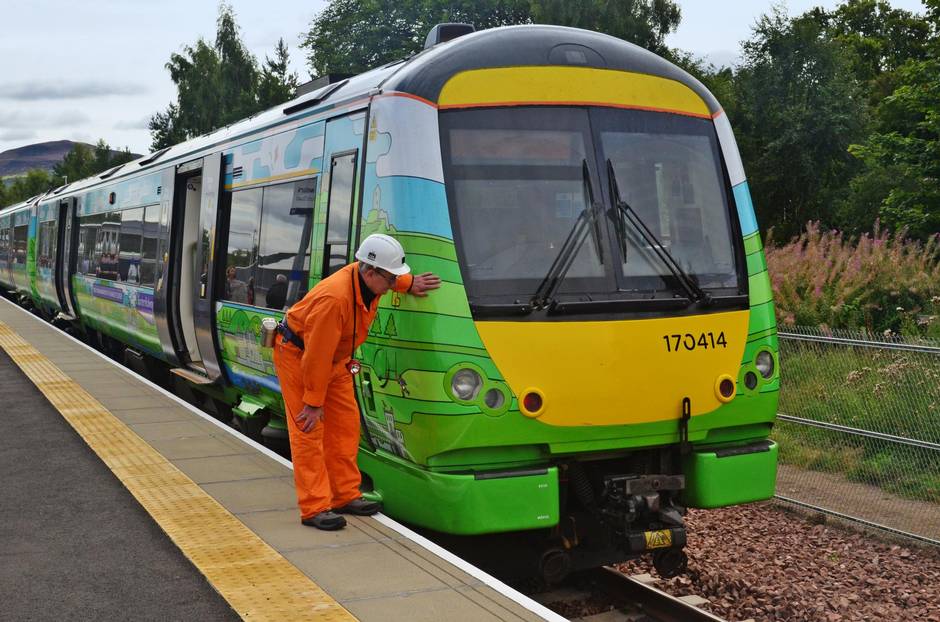 Borders Railway is running again after being closed in 1969 in a spate of cuts that shut down one-third of the British network. (Photos by John Malathronas)

Those grazing sheep are a marker of prime textile country. Pringle of Scotland, one of the top luxury knitwear manufacturers worldwide, celebrated its 200th anniversary this year, proclaiming its Borders roots. Designer Bernat Klein worked in his Galashiels studio, bringing Scottish fashions to houses such as Chanel, Dior and Yves Saint-Laurent. And the River Tweed itself has lent its name to a classic Scottish fabric.

Having started at Waverley, under the shadow of the Walter Scott monument, it’s apt that the line should end at Tweedbank, a short stroll from Abbotsford, Scott’s own home. Medieval-looking and defiantly anti-neoclassical, it’s a Victorian romance that only an imagination of Scott’s magnitude could concoct. Although its coats of armour, skulls and ecclesiastical panels provide the perfect setting for a weekend whodunit, its crenellations, medieval appearance and walled garden awaken the sleeping poet in us all.

Tweedbank is also within walking distance of Melrose Village, dominated by the atmospheric ruins of Melrose Abbey, the burial site of the heart of Robert the Bruce. I climb up to the clock tower for a broad, sweeping view of the surrounding beech trees and bramble bushes. As they say here, the first light of September is always sharp; on this day, it highlights the Eildon Hills, coloured by the purple pinks of rosebay willowherb and the gentle hues of lilac.

If you get off at Galashiels, rent a car to explore further. Kelso is an attractive town with painted Georgian façades alternating with salmon-pink and butterscotch-yellow sandstone buildings. The big attraction is Floors Castle, home of the Duke of Roxburghe, whose grandfather married a rich American heiress in a real-life example of Downton Abbey. Many of the treasures on display belong to her, including a Gainsborough portrait of Captain Henry Roberts, who was supposed to lead an expedition to discover the Northwest Passage. Wars intervened, Roberts died and George Vancouver stepped in instead. 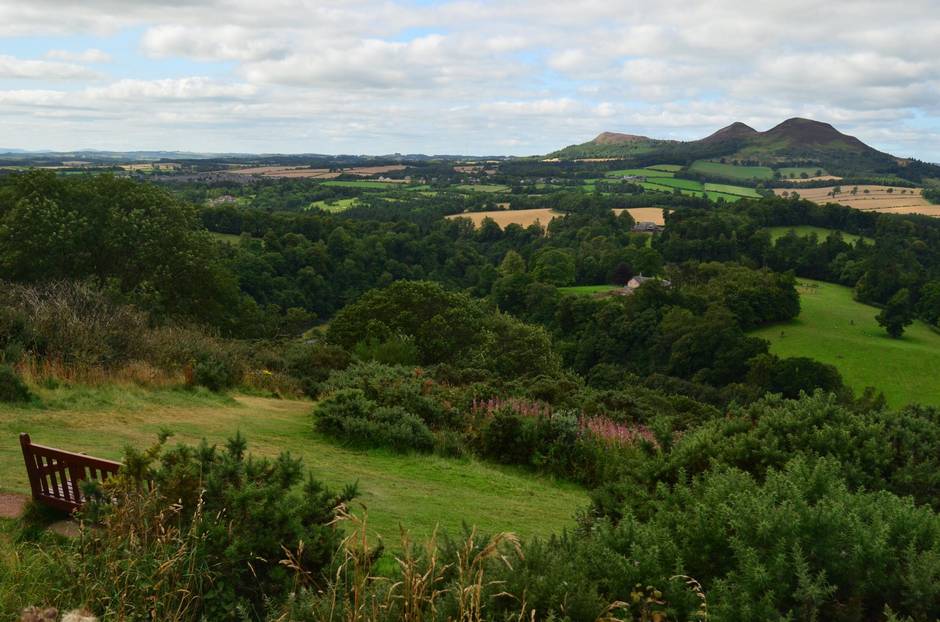 The three-peaked Eildon Hills preside over the fields and forests near Melrose in the Scottish Borders region, through which trains of the Borders Railway are running for the first time in almost 47 years. (Photos by John Malathronas)

Cringletie House, sitting majestically on top of a commanding hill, has another tale to tell. This was the ancestral seat of the Murray family, one of whose scions, Lieutenant-Colonel Alexander Murray, accepted Quebec’s surrender in 1759 after the death of General James Wolfe. Wolfe was godfather to Murray’s second son, who adopted the surname Wolfe-Murray, by which the Peebles branch is known to this day.

Cringletie’s manager talks enthusiastically about how the railway will provide a lifeline for the area, making it easy for Edinburgh day trippers to visit one of Britain’s most scenic regions. He’s right. The Scots say that “a day away from the Borders is a day wasted.” With the arrival of the railway, nobody has an excuse to stay away any longer.

Abbotsford House is an experience in itself, If you can, book the Lady Scott suite (sleeps four) which is in the house’s original wing and overlooks the walled garden. Melrose, Roxburghshire; rooms from £120 ($246) a night including breakfast. scottsabbotsford.com Another option is Cringletie, the old baronial seat of the Murray clan. Stay on the top floor for the best views over the 28-acre grounds full of beautiful undulating woodland. Edinburgh Rd., Peebles; rooms from £159 ($326) including breakfast. cringletie.com

In Melrose try the Townhouse on the main square for simple Scottish fare, large portions and a surprisingly good selection of wines. thetownhousemelrose.co.uk The Cobbles in Kelso is a popular gastropub with good seafood: mussels, Cullen skink (smoked haddock and potato soup) and maybe the best fish pie you’ll ever taste. Try the local craft beer served in two-third-pint glasses. thecobbleskelso.co.uk If you want to live it up, try the Horseshoe just outside Peebles. With two chefs who have worked in Michelin restaurants, don’t be surprised if the place has gained a Michelin star itself by the time you get there. Expect all the trimmings and service of haute cuisine at low prices. horseshoeinn.co.uk

The writer travelled as a guest of Visit Scotland, the Scottish Tourism Authority.