Is it possible to feel sorry for a beach? The stretch of sand that welcomes guests to Tikehau Pearl Beach Resort is a beauty – a pale, shimmering strip in French Polynesia that glows pink in the right light. Calm, crystal-clear water flirts with its edge, morphing into ever darkening shades of turquoise as it extends toward the horizon. Curvy white loungers beg for naps, while lush palm trees stand ready to provide shade from the bright sun.

But they wait in vain. The beach is empty. And it will remain so all day – and the next. For as gorgeous as the natural setting is, it cannot compete with the man-made attractions: thatched huts nestled amid verdant jungle or perched over that azure ocean. Sometimes even the glory of Mother Nature is no match for the thrills that come with an outdoor shower and a king-size bed. 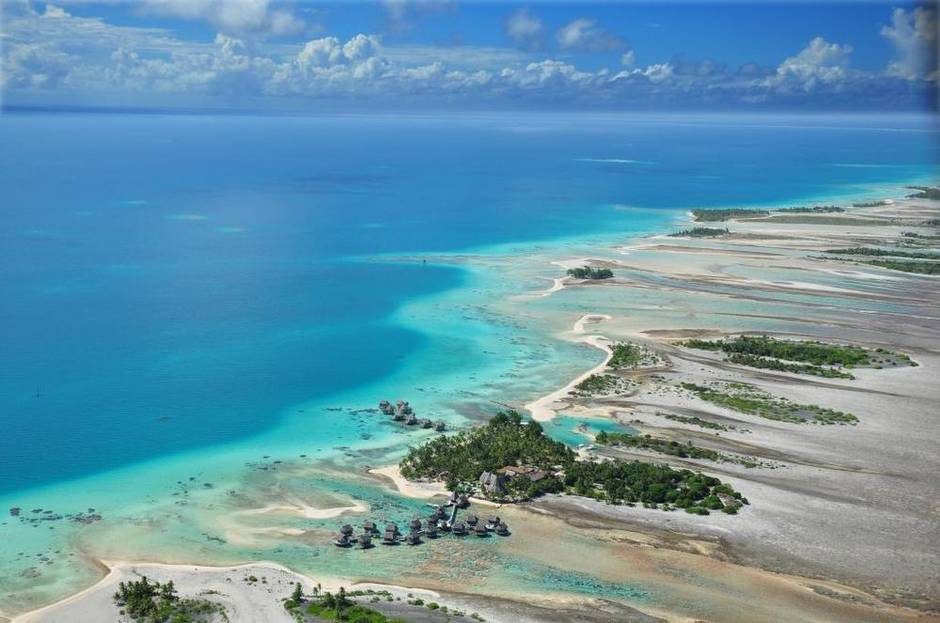 Tahiti is one of the world’s top honeymoon destinations, and for good reason. But those who think it is just about the views – the craggy green peaks of Bora Bora, the rings of tiny islets – and the inherent romance of an over-the-water bungalow are mistaken. After all, the South Pacific does not have exclusive rights to sunsets and seclusion. No, something else is going on here. This region – 118 islands in five archipelagos – oozes sensuality. The air is softer, fragrant with the scent of tiaré, the national flower. Nights are hot and sweaty. When rain falls it is warm and makes short work of T-shirts and cover-ups, rendering them transparent, leaving them clinging to skin. At midnight, as you watch sharks feast upon helpless fish caught in a current, you know that even this feeding frenzy is nowhere near as exciting as what’s happening in room No. 7.

Think of it as geographical Viagra. Forget the newlyweds: It’s couples who need a relationship pick-me-up who should be headed here.

The simmering heat of Tahiti – in every sense of the word – should be enough to rekindle any spark. I can think of no better way to put all those cheesy self-help, Oprah-approved, “how to rekindle your love life” tips into action.

“Make your relationship a priority”

In the middle of the South Pacific, on an inland so tiny it’s simply called a motu, you’ll have no choice but to focus on each other. Pass on Bora Bora and Tahiti (the actual island by that name) and head to one of the less popular islands, such as Taha’a, Tikehau or Rangiroa. Yes, Bora Bora is stunning – but its resorts are big, with upward of 100 rooms. Compare that to Tikehau, roughly 400 kilometres to the north-west. It’s beautiful in a more rustic way, home to only two hotels (the largest has 37 bungalows) and just 500 or so people. Not surprisingly, the WiFi is spotty at best. So go ahead and get lost in one another. 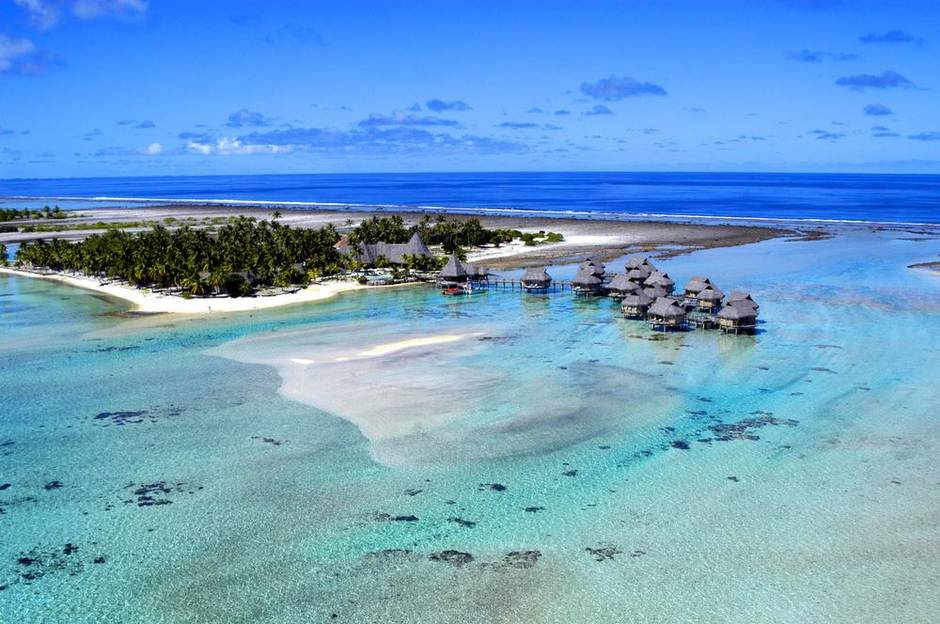 Next, dive right in – literally. The clear, shallow waters around many of the islands are perfect for first-time snorkellers: stingrays and neon wrasses are happy swimming in depths of just a few feet. Take a boat ride out into the ocean and you can expect to see schools of colourful triggerfish, reef sharks and, if you’re lucky, a friendly giant moray eel that likes to be scratched under the chin like a dog. But if you want something more risky, “shoot the pass” at Rangiroa, the largest atoll in Polynesia with a lagoon so huge (77 kilometres long, 26 kilometres wide) it boasts its own horizon. Two major passes – Tiputa and Avatoru – connect the lagoon to the ocean. When the conditions are right, you can “drift snorkel,” letting the current take you through the channel along with playful dolphins, manta rays, lemon sharks and more. What you do afterward – when your blood is pumping from the rush of adventure – is up to you.

A fire dance might sound touristy, but it is extremely sexy, so just go with it. Gentlemen, this is how to rouse your other half – with a ripped young man wearing nothing but a tight loincloth twirling a giant flame stick between his legs. The show takes place at night, so the sparking, whirling circles glow to maximum effect against the black sky. This also means members of the audience have had ample time to down a few drinks, which may explain the slack-jaws and extra-wide smiles after a performance at Le Taha’a Island Resort and Spa one night. (The fact that the dancer seemed to have won the manhood lottery and, um, was really enjoying his job, may have played a role as well.) 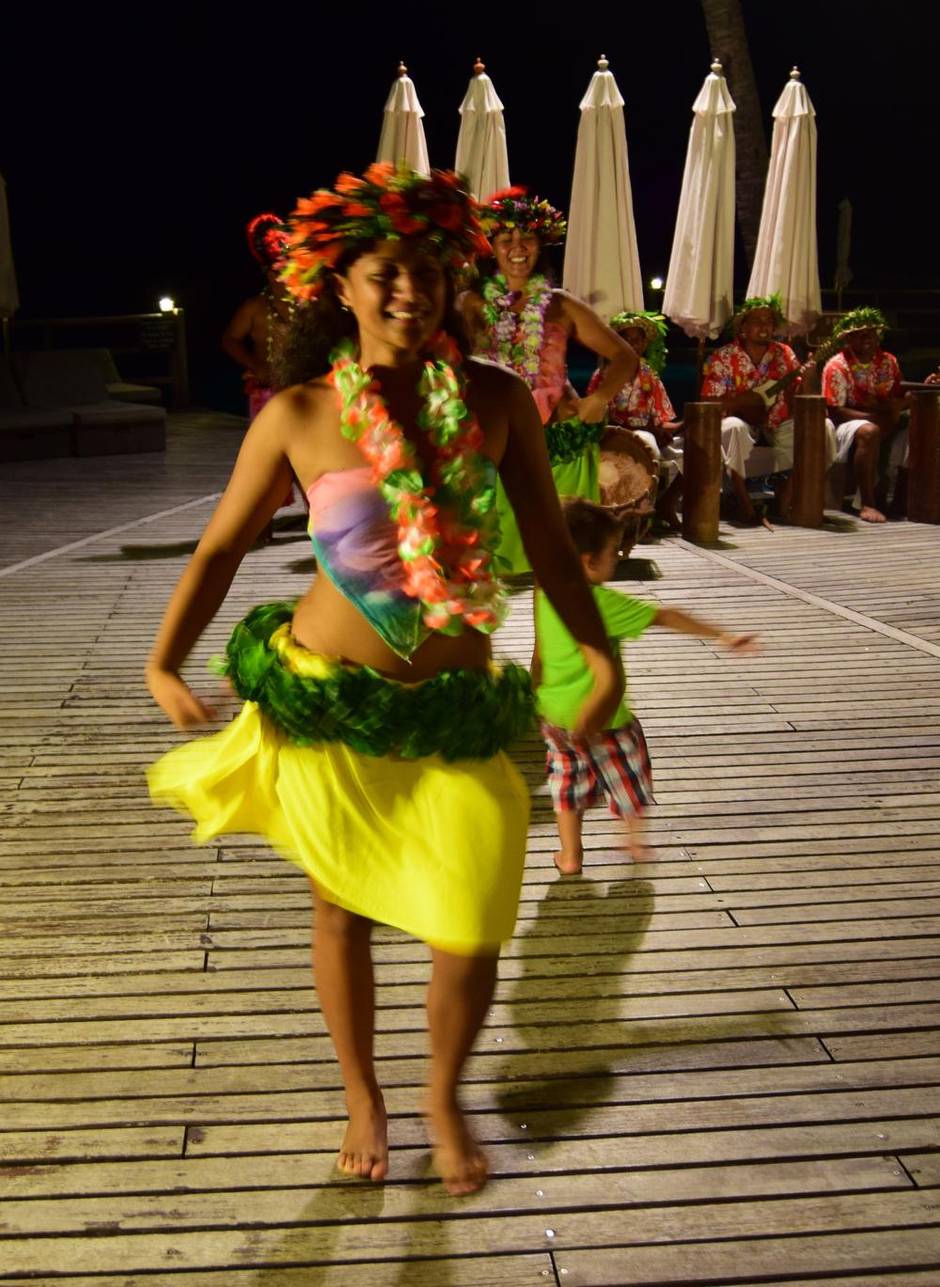 She’ll be the vahine (va-hee-nay) and he can be the off-course explorer. The legend of the Tahitian beauty has been around for hundreds of years: Paul Gauguin, James Cook and the men of the Bounty all fell for the island “Aphrodites,” as the French admiral Bougainville called them. It did not always end well for the women, but today this feminine ideal is still celebrated, particularly by the tourism industry (voluptuous girls in bikinis being an easy sell). To put this fantasy into action, grab a lei or crown of flowers (often a welcome gift at high-end resorts), a sarong and a skimpy top. Then take in an after-dinner performance at Hotel Kia Ora in Rangiroa, where modern-day vahine show off their tamure dance moves. Move your hips “like a bowl, like a bowl” the ladies instruct brave participants. 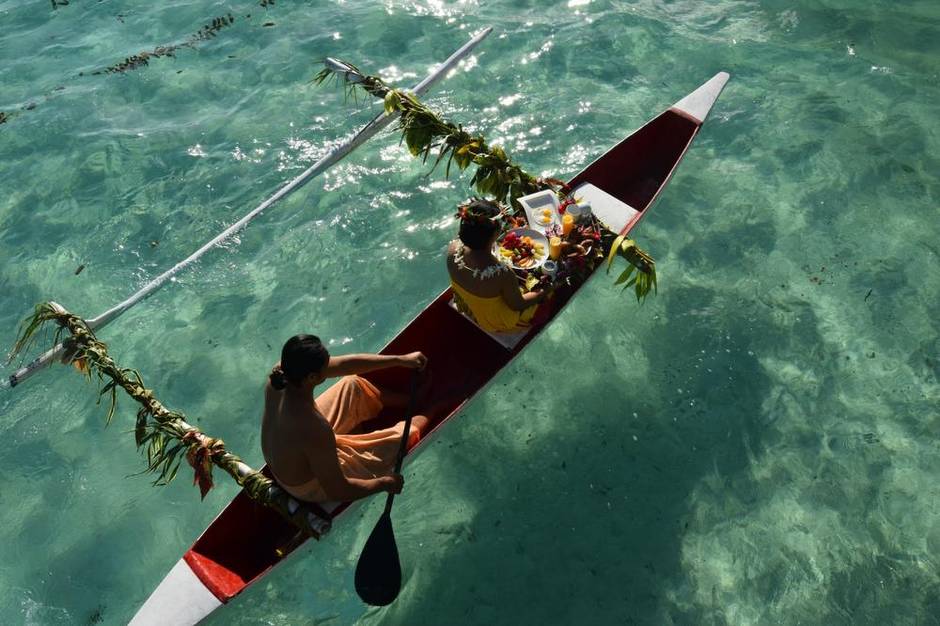 A little clichéd. How about a “date morning” instead? Rise early, work up an appetite and order in the ultimate breakfast – delivered to your over-the-water bungalow by outrigger canoe. At Le Taha’a resort, the feast includes chocolate croissants, fried eggs and a fruit platter, all set up on your private terrace on a table decorated with fresh flowers. Imagine the joys of a room-service breakfast – the simple pleasure of eating in a plush robe (or less), the frisson of naughtiness that comes with splurging – and multiply them by 100.

“Have your own interests”

Doing your own thing (or, in Oprah terms, nurturing your separate selves) is good for a couple, the experts tell us. Perhaps one of you is interested in, say, bird-watching and the other half would rather be fed to a barracuda. No problem. One books a massage while the other ventures to the “bird island” (Motu Puarua) of Tikehau, an oval-shaped atoll just 26 kilometres in diameter. On a guided hike, Mr. or Mrs. Birdlover can keep an eye out for white terns, lesser frigatebirds and boobies – so many boobies: red-footed, brown and masked. (See? Even the birds are in on it.) At the very least, it’s a story good for some smiles over dinner. If you’re lucky, perhaps it will lead to even more, well, you know. 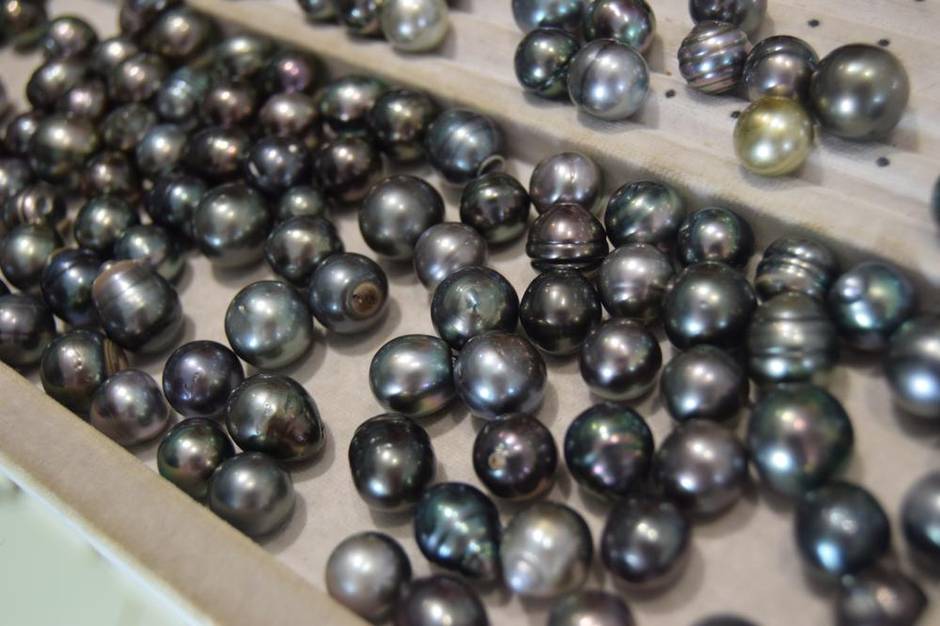 When all else fails, few things say “I love you” like jewellery. In Tahiti, that means black pearls – precious orbs that take at least two years to grow (primarily in the waters around Rangiroa). Despite their name, these gems come in iridescent greens, blues and purples. A necklace of all these different colours is a timeless gift (and one that will set you back thousands of dollars). But the mystique of the pearl isn’t just about looks. According to one myth, the god Oro bestowed a magical oyster to the Polynesian people; when it produced a black pearl, he gave it to the princess Bora Bora as a symbol of his love. Romance, oysters and a whole boatload of sexual innuendo. What more do you need?

Air Tahiti Nui flies direct between Los Angeles and Papeete (flying time: about eight hours), and between the major islands. The airline’s fleet of Airbus A340-300 aircraft is undergoing a multimillion-dollar upgrade, including seat-back touch-screens and modern interior design. airtahitinui.com

Learn about some of Tahiti’s most famous exports on a 3.5-hour tour of Taha’a, with stops at vanilla and pearl farms. The friendly guides of Poe-Rani Tours also explain local flora and fauna, including how to give yourself a temporary “tattoo” with a fern leaf. poeranisafari.com

Excursions to bird island can be arranged for guests of Tikehau Pearl Beach Resort. 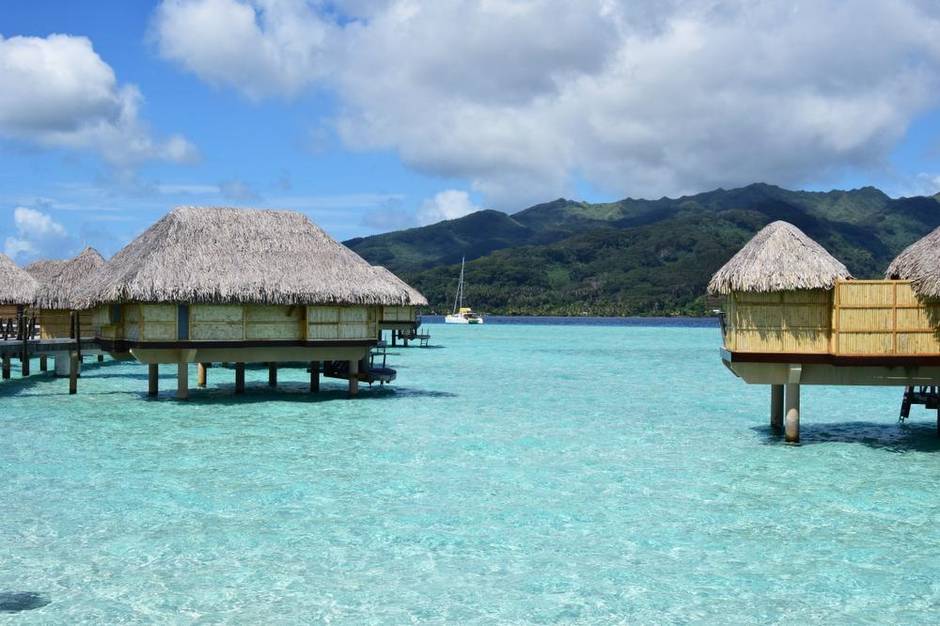 Le Taha’a Island Resort and Spa: This is where you make your over-the-water-bungalow fantasies come true, starting with a water arrival (it’s a 35-minute boat ride from the Raiatea Airport) and a greeting of leis and flower crowns. Stairs from each hut’s private porch lead into clear, shallow waters; inside, in-floor windows let you watch rays swim by. Activities and amenities include tennis courts, a spa, three restaurants, coral gardens and a pearl jewellery shop. Garden villas are also available. Overwater bungalows from $940; letahaa.com

Tikehau Pearl Beach Resort: Still luxe, but simpler and more relaxed, Tikehau wins over even seasoned travellers. Bungalows – over-the-water or hidden among palm trees near the beach – are made of natural materials, including bamboo, teak and coconut. There isn’t a lot to do – although snorkelling around the bungalow stilts is excellent – but that’s the point. From $650; spmhotels.com

Hotel Kia Ora Rangiroa: Located near the Blue Lagoon, this is an ideal resort for fans of big-game fishing and divers, with a PADI five-star centre on site and four dives scheduled each day. (Private trips are also available.) Most bungalows are located on land, but private pools and outdoor soaker tubs in some rooms will wow those who don’t need to be over the water. Beach bungalows from $695; eu.hotelkiaora.com

Ninamu: This small ecoconscious escape is on a private motu in the Tikehau atoll. It’s the perfect place to play Robinson Crusoe (without the cannibals). Six bungalows, set in the jungle and handmade with materials from the island, are one-of-kind. The owners grow organic fruits and vegetables on site, along with pigs and chickens. They even make their own salt. Families often take over the entire property – as do many A-list celebrity guests. From $450 a person a night, based on double occupancy; motuninamu.com

The writer travelled courtesy of Air Tahiti Nui and Tahiti Tourisme. Neither reviewed or approved this article.