The Japanese enthusiasm for Hokkaido can hardly be overstated. Every day, some 80 planes carry passengers between Tokyo and this northernmost Japanese island, famous for its mountains and wetlands, bears and foxes. But even this air route, one of the busiest on the planet, is not enough to satisfy Hokkaido-mania. In early 2016, the Shinkansen – the Japanese bullet train – will make its long-awaited arrival in Hokkaido.

The prospect of reaching this beloved northern destination by means of this cherished form of transportation has created a fever pitch of excitement in Japan. In Hakodate, the terminus of the new Shinkansen line, a gigantic silhouette of the dolphin-nosed ultra-fast train has been painted on the front of the rail station. The Japanese tourist board is running full-page ads in international magazines announcing the hallowed union. Over dinner in Tokyo, some Japanese friends told me that as much as they had always wanted to go to Hokkaido, going by plane felt somehow wrong. They were already planning their trip by Shinkansen.

To a Canadian, all the fuss about Hokkaido can be a little perplexing. We already have plenty of mountains and bears, thank you very much, and the absence of bullet trains hardly prevents us from enjoying them. But there are a few reasons why even Canadians should get excited about Hokkaido. If you want to visit Japan in the summer months, Hokkaido is in many ways your only sane option. From June to August, it is incessantly rainy and unbearably hot in the southern islands, where an umbrella and a cold towel draped around your neck are mandatory accessories. 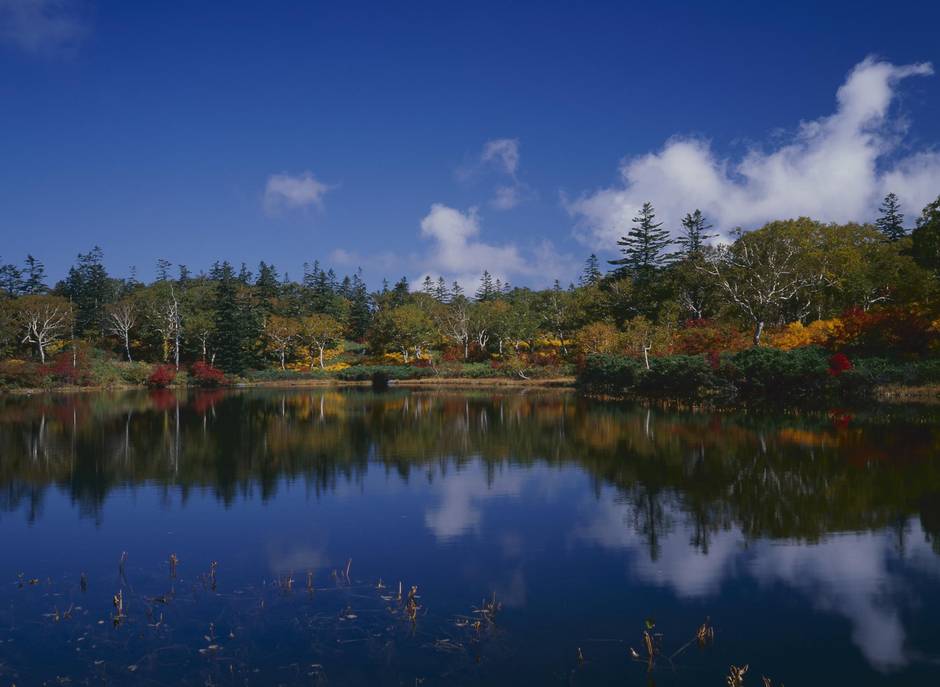 With protected natural areas a rarity in Japan, it is little wonder that the serene parks on Hokkaido are so popular among locals. (JNTO)

In Hokkaido, meanwhile, it is clear and pleasant. Although Tokyo and Osaka are rightly famous for their thrilling human throngs, claustrophobia sets in after a while. In Hokkaido – which has 22 per cent of Japan’s land mass but only 4 per cent of its population – it is possible to enjoy the urban pleasures of its vibrant capital city, Sapporo, and then escape into the vastness of one of six national parks. Adding to the serenity is the fact that although domestic and regional tourism abounds, Hokkaido is relatively free of international visitors.

With all the talk of speed, I decided to explore Hokkaido in the slowest way possible. Sapporo is an hour and a half from Tokyo by plane; the Shinkansen will get you to Hakodate in about four. It took a full 36 hours to get from Tokyo to Hokkaido by sea aboard the Diamond Princess, a charming older ship recently renovated and deployed to Japan, and the cruise then continued around Hokkaido for another eight days.

My first stop was foggy Kushiro, a far-flung eastern city. (So vast is Hokkaido, roughly the size of Ireland, that it would take a further 10 hours to reach Kushiro by rail even after you’d arrived in Hakodate on the Shinkansen.) The highlight here is the nearby Kushiro-shitsugen National Park, a vast wetland that is home to the famous red-crowned crane, the elegant bird beloved of Japanese artists and featured in the logo of Japan Airlines. Protected natural areas are a rarity in Japan, a country with a spotty record of environmental stewardship, but the Kushiro wetlands are spectacular. Even before I had entered the park, I spotted a crane resting languidly in a field. Like Mount Fuji, the red-crowned crane is so perfectly proportioned – all stark, simple lines of black, white and red – that it seems to have emerged from a woodblock print. On a 20-kilometre canoe trip down the Kushiro River, I spotted several other famous residents of the park: eagles, herons and the incomparably cute red-furred Hokkaido fox. 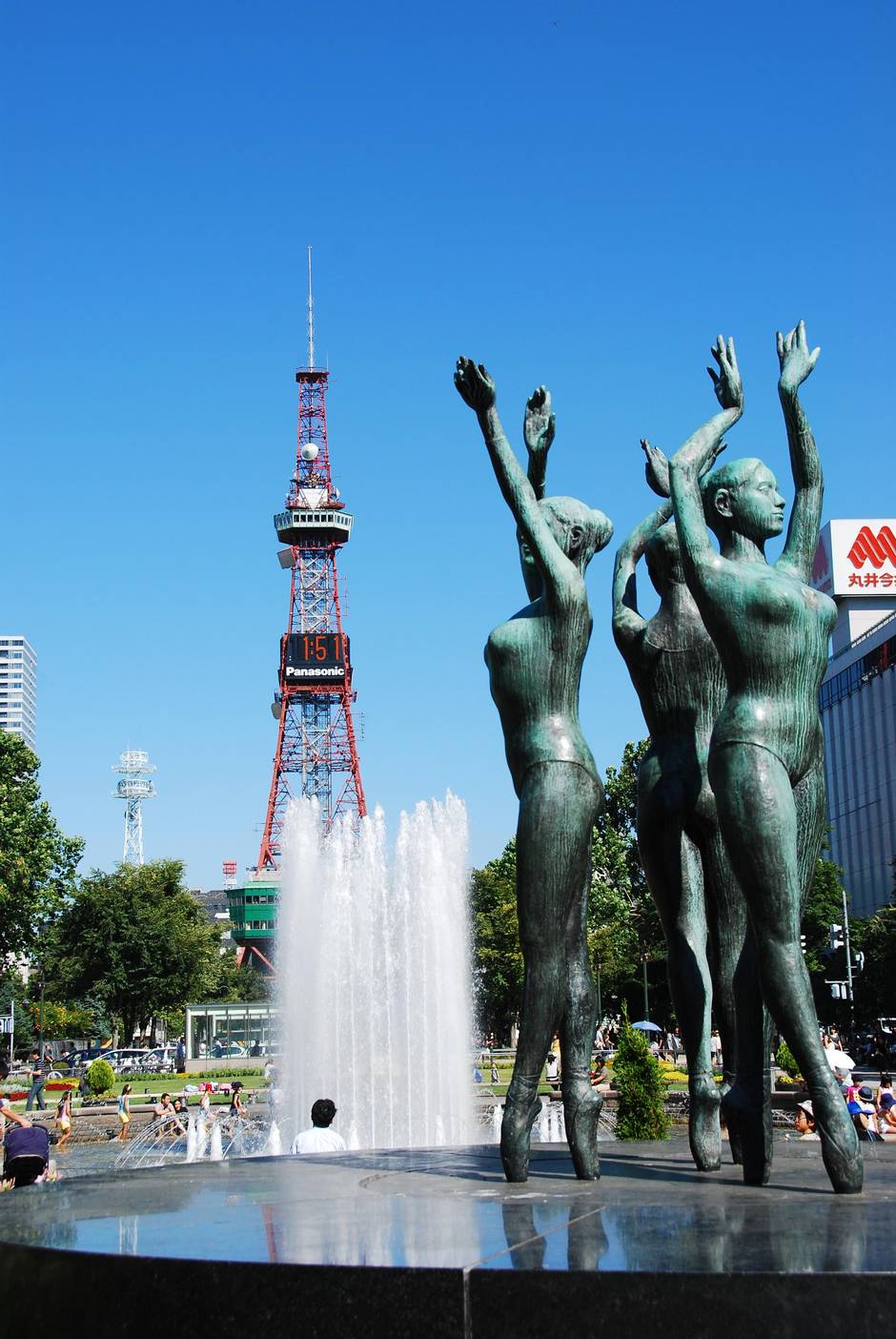 Sapporo, the capital city of Hokkaido that is known for its beer, offers a version of city life almost entirely free of urban squalor, with huge parks that are leafy and clean. (JNTO)

The advantages of seaborne transit revealed themselves further the next day when we cruised through the southern Kuril Islands and along the spectacular Shiretoko Peninsula. The area serves as a reminder of Hokkaido’s historical status as a massive pawn in the imperial rivalry between Russia and Japan. Japanese colonization of Hokkaido began in earnest only in the late 19th century, when the native Ainu people were displaced in the Japanese effort to consolidate territory against Russian expansion in the Far East. Today, several craggy volcanic islands off the northeast coast of Hokkaido remain disputed between Russia and Japan – and the only practical way to see them is by sea. The remote, 70-kilometre-long Shiretoko Peninsula of Hokkaido, a UNESCO World Heritage Site and a carefully protected national park, is likewise best explored from the water. It took nearly four hours for the Diamond Princess to make its way along the northern coastline, and although binoculars were necessary to take in all the sights – maritime regulations prevent cruise ships from coming within three kilometres of the shore – the endless waterfalls, volcanic peaks and dramatic caves rewarded the effort.

Sapporo, the capital city of Hokkaido, is a short train ride from the cruise port of Otaru. As Japan’s fifth-largest city, it offers much of the characteristic Japanese urban experience: huge crowds of people, tall buildings, neon signs and incredible shopping. Like Tokyo and Kyoto, it offers a version of city life almost entirely free of urban squalor. Its huge parks are leafy and clean, and even roadwork is infused with the famous Japanese cuteness: In Sapporo, construction pylons are pink and feature rainbows and the face of Hello Kitty. Sapporo is also home to the famous beer, and is, along with Fukuoka in southern Japan, perhaps one of the most laid-back and friendly of Japanese cities. 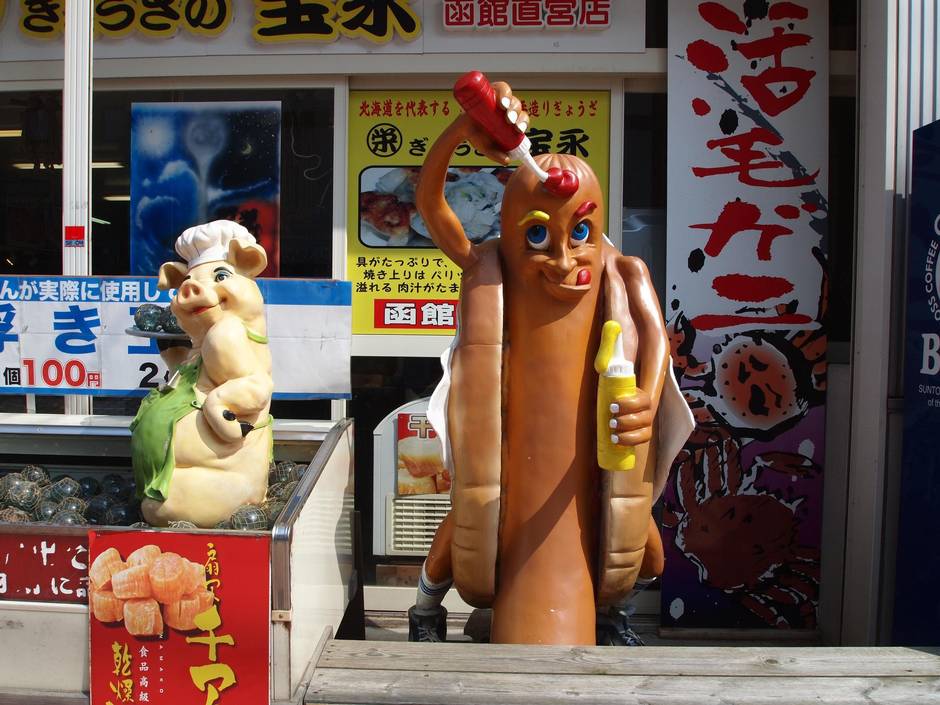 In Hakodate, the destination of the new Shinkansen train line, Japan’s fascination with Western culture can be seen in its American-style diners and bizarre hot dog mascot. (Marta Balcewicz)

The real urban jewel of Hokkaido, though, is Hakodate, the destination of the new Shinkansen line. Located on the southern tip of Hokkaido, Hakodate was one of the first ports opened to Western commerce following the end of Japanese isolationism in the mid-19th century. This history of cultural mixing is still evident in the city’s unique architectural fusion of Japanese and Western styles, in its juxtapositions of Buddhist temples and Christian churches, and in culinary fusions, such as the preferred local ice cream flavour, squid ink (despite the inky colour, it tastes pretty much like vanilla). The fascination with the Western world, particularly with the United States, remains palpable in the form of Lucky Pierrot, a popular local chain offering a bizarre, cartoonish take on the American burger joint, and in the fabulously camp statue, along one of the city’s main streets, of an anthropomorphic hot dog wearing a stars-and-stripes cape and pouring ketchup over its head.

It’s hard not to worry that this distinctly Japanese celebration of Western culture will meet its ironic end with the arrival of the bullet train. It’s not just the Japanese who are excited about the Shinkansesn; international tourists will flock here when they’re finally able to use their Japan Rail passes to visit this mysterious northern island. Yet if history is any guide, Hokkaido – long a place where cultures have come together – can handle it. And Hokkaido has geography on its side. Until the Shinkansen reaches all of the island’s furthest extremities, it will best be enjoyed from the slightly distanced vantage point of the sea, where its distinctive sense of isolation is preserved. 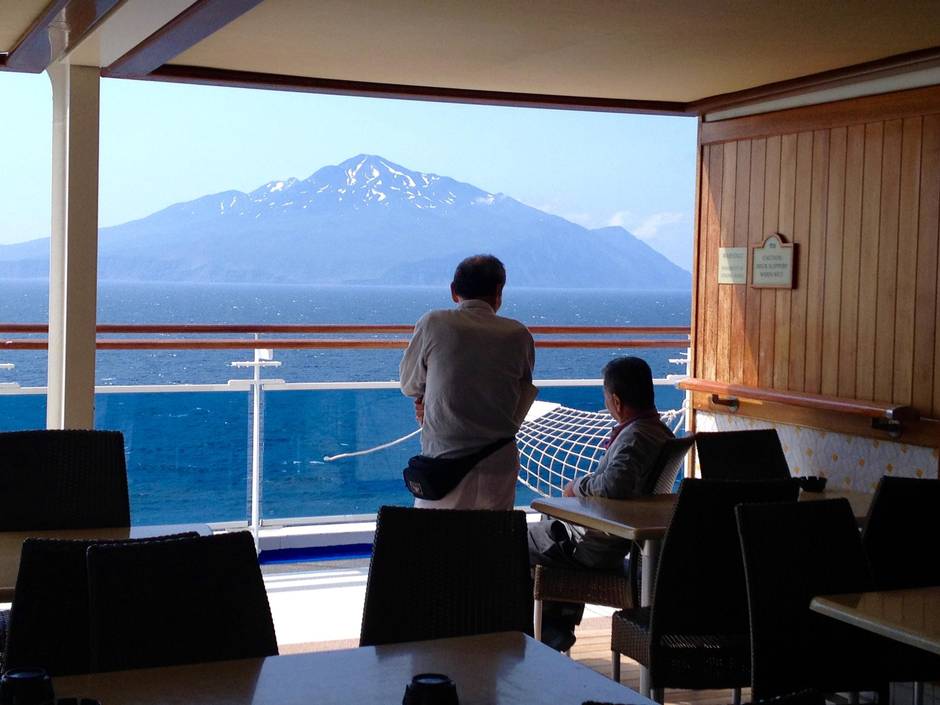 Cruising around Hakkaido, above, offers a spectacular view of the Shiretoko Peninsula, a UNESCO World Heritage Site and a carefully protected national park. (Marta Balcewicz)

Although Princess is an American-run cruise line, its Hokkaido cruises cater mainly to Japanese tourists. Some notable differences from the cruising status quo include:

Japanese toilets: Yes, staterooms on the Hokkaido cruise feature the famously complicated Japanese toilets. They have heated seats; they have four different types of bidet streams, each with adjustable pressure; and they play a little musical ditty to cover the sound of your business.

Japanese food: Japanese delicacies such as kayu, soba and tsukemono are not relegated to special Asian-themed buffets – they are simply the buffet.

Unusual destinations: Cruising past the Kuril Islands or stopping for a day in the Russian port of Korsakov on Sakhalin Island are not likely to appeal to North American tourists – nor are they designed to. Since Japanese ships cannot go near the disputed islands without causing an international incident, foreign-registered cruise ships are one of the only ways Japanese passengers can see them. They’re drawn to Sakhalin by the history of Japan’s occupation of the southern part of the island, which the Japanese called Karafuto, in the first half of the 20th century. Far off the beaten track for Western tourists, both destinations are fascinating, exotic, even brag-worthy.

Unusual excursions: The majority of organized shore excursions – most guided only in Japanese – feature demanding scrambles down mountains or kilometres-long kayaking adventures. It’s the perfect way to work off those extra soba calories from the lunch buffet. For details visit princess.com.

The writer travelled as a guest of Princess Cruises. It did not review or approve the story.