The flies should have been the first clue. They assaulted us in waves as we scrambled ashore, covering neoprene-clad shoulders and sun-ravaged skin. Their black bodies peppered the riverside grass like a dusting of ash, and a steady drone of wings could be heard above the rushing water. This alone should have alerted us that magic was afoot, but our nerves were twitchy, our focus ahead, for around the next bend in the deep canyon, and just out of sight, awaited Bridge River Rapids.

After a 1,500-kilometre circumnavigation of British Columbia's Southern Coast Range, we were almost back to Vancouver. This would be our final challenge. So brushing flies from our faces, the three of us scrambled along a rough shoreline trail, until at last we caught sight of the cataract.

A series of rock ledges choked the entire Fraser River down to a narrow throat, forming a rapid so fierce and desperate that commercial outfitters were forbidden to run it. As we watched, a midstream wave grew to six metres in height before collapsing with a boom that shook the ground and reverberated through the canyon. Again and again, the white monster reached skyward.

Only later, as our shock passed, did we notice the salmon.

Continuing downstream, we stumbled upon a bustling assemblage of native dip-netters and fish-filleters. Drying racks stood in lines, draped with loads of symmetrically sliced orange flesh, appearing like scarves in a foreign market. The sun-warmed rocks underfoot ran red with blood. Men, tethered only by fraying yellow nylon ropes, leaned over the torrent and with each dip of their long handles, brought ashore overflowing nets.

The sound of Nickelback on a car stereo blended with the dull thud of fish being clubbed and the rumble of idling pickups. A group of coltish children leaped along the banks, saving fish lodged in crevasses by the surging and receding river, releasing them upstream of the tumult. One tiny boy, no more than four years old, wrestled a salmon nearly equal to himself in height and weight. A powerful snap of the tail sent the toddler tumbling backward. Undeterred, he leaped onto the fish like a horse, eventually heaving and dragging it back into the river.

A shiny Honda appeared on a dusty track from downstream, parking amid a scramble of vehicles. The middle-aged driver hopped out. Shedding his suit jacket, rolling up shirt sleeves and pulling dark hair back into a ponytail, he wandered into the melee. Snatching fish as they were dumped ashore, he carefully slid fingers through the gills, then ripped each head back and broke the spine with a sudden snap.

"Best done while the heart is still ticking,' he told us. "Pumps the blood out. Keeps the flesh firmer." Still wearing his collared shirt, the man was already covered from head to toe in blood. "This is the height of Horsethief [an upstream creek]run," he continued. "The fish are running 'bout 10,000 an hour now."

Major migrations are like magnets in the natural world. Flies rose in clouds as we wandered the maze of activity. Crows and ravens stole scraps and guts underfoot. Small insect-eating birds darted about, which in turn brought hawks, eagles and vultures, which circled lazily on thermals above.

I had experienced similar moments of migrational bounty before - the 400,000-strong Bathurst caribou herd crossing the tundra, shadowed by wolves and bear; herring schools tossed to the ocean surface by upwellings, consumed by frenzied seals under a sky filled with eagles - and once again I felt the familiar presence of the sacred and profound.

We lingered for hours, loath to leave, instead nibbling on wind-dried sockeye while watching wave after swirling river wave erupt with flashes of silver.

At last, we portaged, the water below the cataract thick with writhing salmon. With every stroke, raft oars thudded through bodies. Knowing that sockeye rest below rapids during the night, we calculated that 100,000 fish might occupy these pools by dawn.

No one talked as we drifted away. Instead, we lay back and felt the world suddenly press outward to the horizons, growing impossibly big and powerful. There were no thoughts of collapsing salmon stocks, or of the effects of sea lice and offshore oil. All we could do on that warm Canadian dusk - as sockeye rushed underneath us, and the last calls of a warbler echoed through the canyon - was surrender to the moment. 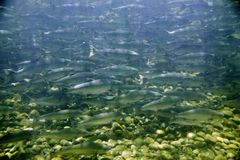 Whale watching in Quebec
May 2, 2018
The thrill of Montreal nightlife
May 2, 2018
Only in Canada: The Riviera meets the Huldufolk
May 11, 2018
Follow Bruce Kirkby on Twitter @magicwillhappen
Report an error Editorial code of conduct
Due to technical reasons, we have temporarily removed commenting from our articles. We hope to have this fixed soon. Thank you for your patience. If you are looking to give feedback on our new site, please send it along to feedback@globeandmail.com. If you want to write a letter to the editor, please forward to letters@globeandmail.com.
Comments