Kim Foley had managed to fit in running and gym workouts while raising three children, but couldn’t channel her inner jock to tackle organized or team sports – until the now-adventurous Toronto resident discovered the thrill of hockey in her 40s.

Foley and other mature women, who are venturing into sports for the first time or trying new athletic challenges, are hitting ice rinks, golf links, soccer fields and tennis courts, not to realize any Olympic dreams but to enrich their lives.

And chances are, they’re doing it while juggling personal and work responsibilities.

“When I first started hockey, I didn’t even know the rules or where to position myself on the ice,” Foley says. “… Every week was more humiliation, but it was kind of fun and they [the other players] didn’t make me feel bad.”

With research indicating Canadian women still face many barriers to taking up sports and staying in the game, there are signs the athletics glass ceiling is cracking. Various leagues, clubs and organizations – both co-educational and for women only – emphasize you don’t have to be young or a guy to get your game face on. 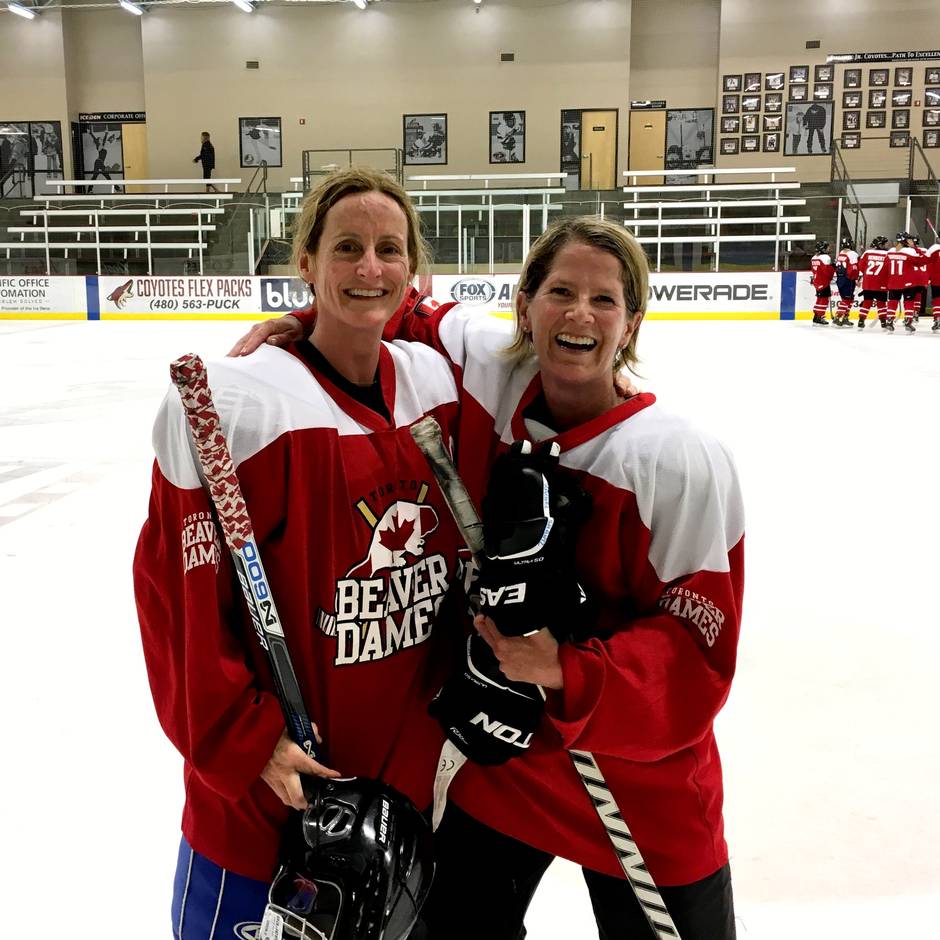 Kim Foley, left, with her Beaver Dames teammate Rachel Shantz, didn't start playing hockey until she was in her 40s. Another mother turned her on to the game. (Kyla Bowman)

Foley’s recreational hockey journey began after she and her husband, bank executive Edward Lawrence, returned to Toronto with the children following his 11-year job relocation to New York. She fell into the sport accidentally, when she met another mother, Liz O’Brien, who told her about Skate Sister, the women’s organization she founded in 2011. Skate Sister offers beginner- and intermediate-level hockey and power-skating classes, and is involved in sending teams to tournaments.

“She really encouraged me,” recalls Foley. “I had all these reasons not to do it – I had never worn hockey skates before, I didn’t know the rules. … There were a lot of women just like myself who either didn’t know how to skate but could play or didn’t know how to play but could skate. It was an incredibly welcoming and encouraging environment.”

Now 50, with her daughter nearly 13 and her sons 15 and 17, Foley plays forward year-round, including for the Hockey Bags, a women’s team with games at Toronto rinks, and the Beaver Dames, a travelling team that has competed in tournaments in places such as Iceland and Phoenix. The only playing obstacle the busy mom faces these days is a broken arm she suffered after colliding with a player during a scrimmage, but she has already signed up for the fall season.

“Most of the women I play with are 40-plus ... with kids and careers, and people like myself who have stayed home with kids, or lawyers, lecturers, bankers, everything. You just kind of come together and have this one thing in common which is an incredibly uniting experience,” she enthuses.

Kelly Cahill, manager of a health-care company in Halifax, isn’t a total sports newbie – for years she has been a runner and hit softball diamonds. Her foray into golf started because she wanted to play alongside her husband, a long-time golf enthusiast, so she joined PGA of Canada pro Sara Wilson’s Metro Ladies Golf Inc. club four years ago to brush up on the game.

“I’ve since dropped the husband and kept up golf,” says Cahill, 41, the mother of a 10-year-old son.

The first few times on the links were “terrifying” because she was new to a sport that’s male-oriented, but she has since gained many friends and opened herself to other athletic and social adventures. She even plans to take up curling this fall after experiencing an event put together by Metro Ladies Golf. 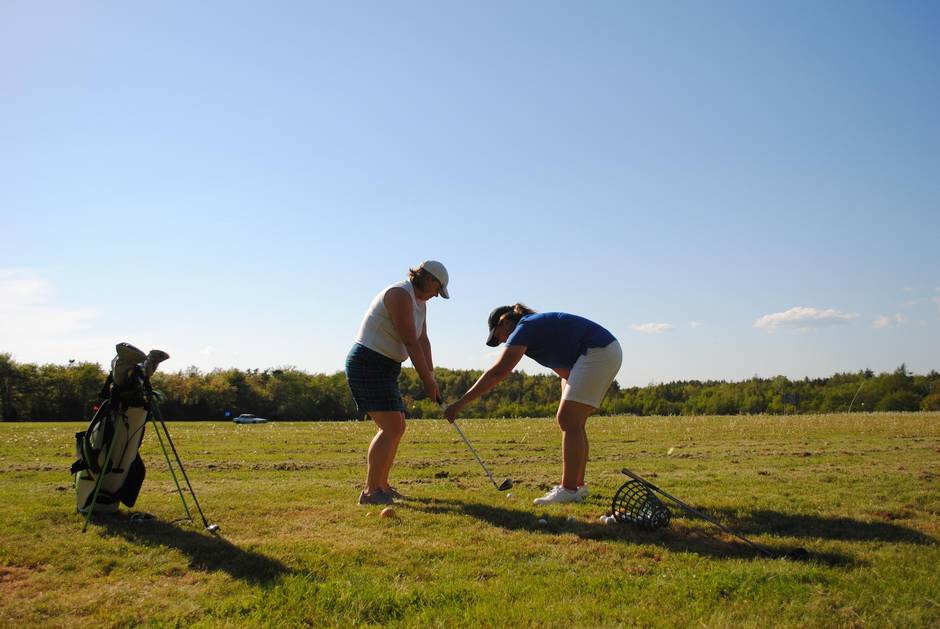 Health-care company manager Kelly Cahill, left, gets tips from golf pro Sara Wilson at the Metro Ladies Golf club in Halifax. Now 41, Cahill took her first swing at the game four years ago, and is now out on the links two or three times a week. (Keegan Cahill)

“Sara has done a fantastic job really breaking down the barriers. ... Now I can confidently call a pro shop and book a tee time,” says Cahill. “Before, I just felt they’d ask me something where I wouldn’t know what to say because I wasn’t terribly confident.”

Foley and Cahill exude a type of enthusiasm that women’s sports advocates wish would translate into higher overall participation rates.

“A considerable amount of work remains to be done for girls and women to realize all the benefits that participation in sport offers,” concludes Women in Sport: Fuelling a Lifetime of Participation, released by the Canadian Association for the Advancement of Women and Sport and Physical Activity (CAAWS).

The report concludes women participate in sports at much lower rates than men, with the decline in girls generally starting at adolescence, despite the potential physical health, psychological (bettering mood, well-being, self-esteem and feelings of empowerment) and social rewards.

Girls who don’t get into sports by age 10 have just a 10-per-cent chance of being active as an adult, and the rate of participation over 15 has dropped to record lows, according to the report.

The findings aren’t lost on experts such as exercise scientist Leigh Vanderloo of ParticipAction, a non-profit organization founded in 1971 that encourages daily physical activity. 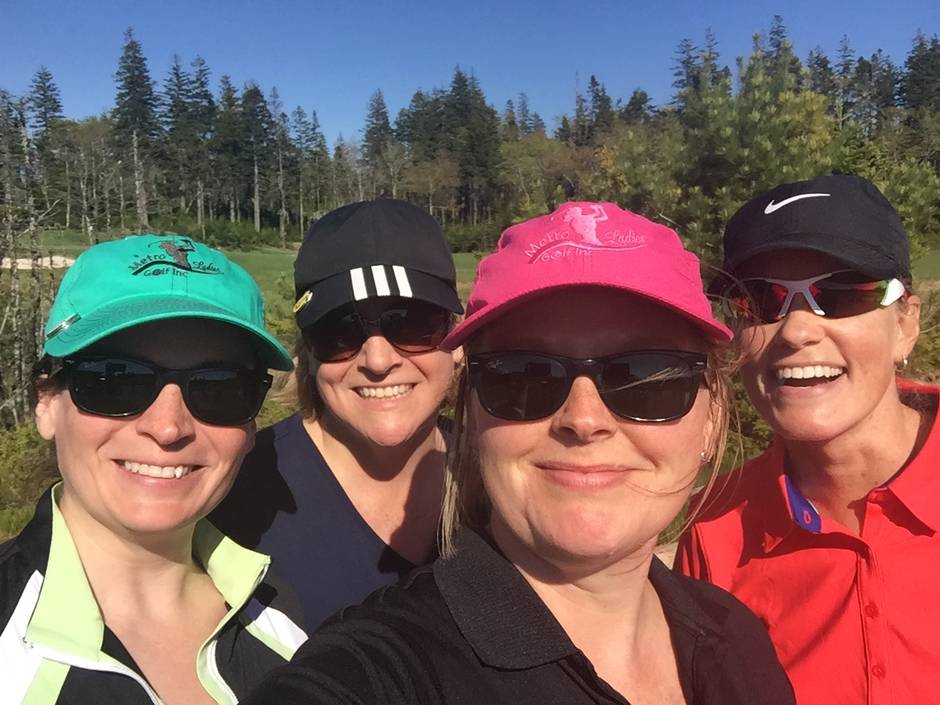 Golfers Carley Hubbard, left to right, Andrea Corrigan, Kelly Cahill and Wanda Clark, enjoy the camaraderie at Sara Wilson's Metro Ladies Golf club in Halifax, where both newbies and veterans are welcome, and the motto is: 'Making the game of golf more accessible and welcoming to women.'

While attitudes are changing, the stereotype that it’s not feminine to engage in sports and that females are “more fragile” is still out there, she says from her Toronto office.

“That’s why we want parents to encourage girls to play sports, to be role models in playing sports themselves, and say it’s okay to sweat, and that you don’t have to necessarily aim to be professional athletes.”

At Metro Ladies Golf club in Halifax, the focus is on “making the game of golf more accessible and welcoming to women.”

Wilson, one of the few female golf pros in Atlantic Canada when she started out 20-plus years ago, says her idea for the club stemmed from her difficulty finding anyone to hit the greens with when she returned to the sport after taking time out to raise her three children.

The club has grown to 150 members, who come from a range of backgrounds and lifestyles. Seventy per cent of them had never played golf at the time they joined.

Wilson says it can be tough to get some women to even inquire about getting into sports – often because they’ve had bad experiences.

“Someone may have said something to them to turn them off. I remember when I was younger and with male counterparts, they’d joke, ‘The ladies’ tees are there.’ Even the selection of women’s equipment and clubs have largely been ignored for a very long time.”

Her own daughter, 11, and one of her nine-year-old twin sons play golf among other sports, while Wilson serves as coach of her other twin’s hockey team.

Being a positive role model for women was one reason Nicki Bridgland founded the co-ed Ottawa Sport and Social Club 14 years ago. Bridgland, 46, herself active while raising kids, says growing interest by women looking for affordable and varied sports opportunities is part of the reason she added clubs in cities in Ontario, British Columbia and Nova Scotia.

Today, nearly half of the total of about 20,000 members are women who enjoy competing with guys. As part of an attempt to reduce the intimidation factor, embracing the “spirit” of sports is emphasized: Teams in volleyball, soccer, dodgeball and many other activities, for instance, are asked to rank how fun it was playing against their opponents when they report their final scores to league officials.

Back when Foley was growing up in Toronto, feeding women’s hunger for sports was far from the norm. In the 1970s, she says, she and her neighbours would get together to flood fields to form makeshift ice rinks. While the guys played shinny, the gals were relegated to “pleasure pads.”

“There wasn’t as much of an interest for girls to play hockey and there wasn’t accessibility,” says Foley.

Today, she adds, “You don’t think twice about girls in hockey.” Even her daughter competes.

Vanderloo, of ParticipAction, says women are especially more likely to stick with sports and fitness if they complement their lifestyles and are fun.

“We want everyone to stay active throughout their lifespan because it will ensure a longer and better quality of life.”