British Columbia's wildfire season is shaping up to be the worst and most expensive in recent memory, a costly and destructive problem fast becoming the norm in Western Canada.

The season will last more than another month in B.C., but more than $125-million has been spent fighting fires that have burned almost 370,000 hectares. Three years ago, the entire season claimed that much territory and the province spent $300-million on firefighting. That year was worse than 2009, but not by much.

Alberta's most destructive wildfire season in the past decade involved the catastrophic Slave Lake fire in 2011. That was until a 10th of Fort McMurray burned down last year, sending more than 80,000 fleeing from the conflagration and triggering almost $4-billion in insurance claims.

New research shows the intensity of wildfires will only increase in the coming decades as climate change makes Canada warmer and drier. That reality is already sending the authorities scrambling to understand, predict and suppress destructive wildfires. But experts and academics say there are several innovative ways we can better tackle a natural disaster that appears set to become an inevitable fixture of our future.

Earlier this year, Alberta announced it would spend $15-million a year for the next three years on helping communities implement the national FireSmart program aimed at removing fuel sources and mitigating the wildfire risk posed by nearby forests. Over the past two years, B.C. has approved almost $900,000 in FireSmart grants and over the past decade has invested $78-million in its own plan to help local governments and First Nations reduce their risk.

Still, the B.C. program works out to less than $8-million a year, which pales in comparison to how much is spent once fires threaten communities, according to Lori Daniels, an associate professor in the University of British Columbia's forestry department.

"This month," Prof. Daniels said, "in an emergency situation, we had to dedicate $100-million just to cover costs incurred by the tens of thousands of evacuees in our province."

Prof. Daniels, who has been researching wildfires in B.C. for more than 20 years, said that after a wildfire razed parts of Kelowna in 2003, a provincial review identified roughly 680,000 hectares of B.C. that were at a similar high risk of a destructive wildfire. A 2015 update from the Forest Practices Board found 90 per cent of those areas remained at high risk and had not received any mitigation work. "It's not working," Prof. Daniels said, "or we would have done more than 10 per cent."

Part of the reason for the slow pace of prevention activities is the lack of a concerted provincial strategy for fire-proofing the two kilometre "doughnut" of forest around each community, she said. "If the provincial government would invest in building that capacity, then we could have these [mitigation] experts in different centres around the province working with multiple communities in their vicinity, instead of every community having to become experts, assess the problem, write grants, get money, do the treatment and try to follow up."

More Canadians and their assets are moving closer to the boreal forest, but Canadian insurance companies still treat wildfires and house fires the same, according to Glenn McGillivray, managing director of the non-profit Institute for Catastrophic Loss Reduction. Mr. McGillivray, whose Toronto-based research centre is funded by the insurance industry, said there is no reason why city dwellers facing no risk of a wildfire hitting them should pay the same insurance rates as those living in rural areas prone to such natural disasters.

Breaking wildfires out as a peril separate from regular fires would mean higher rates for those owners in at-risk communities, but also possible discounts if they take mitigation measures such as clearing brush and small trees around their house.

"It sends a message out that: No. 1, maybe you shouldn't be living in this place and, No. 2, maybe you should do whatever you can to mitigate the risk," Mr. McGillivray said. This approach is already meeting success in the southwestern United States, he said.

The provincial report into the causes of the 2003 Kelowna fire also stated this strategy could encourage those in more rural areas to make sure their dwellings and communities are built to acceptable standards.

Werner Kurz, a senior climate change researcher with the national forest service at Natural Resources Canada, said remote communities can prepare for coming wildfires while also weaning themselves off their dependence on fossil fuels.

To do this, he says, off-the-grid communities could log their surrounding stands of forest – clearing the vicinity of wildfire fuel – and then convert this timber into electricity at a bio-energy facility. This is better than the alternative of prescribed burning of these areas, which helps rejuvenate the landscape but also emits carbon dioxide and heavy smoke into the atmosphere, Dr. Kurz said.

"First of all, it burns at a much hotter temperature," Dr. Kurz said, "so you don't have the gases produced during the smouldering phase [of wildfires] – which are methane et cetera – and you also get much less particulate emissions."

For those communities connected to the provincial hydroelectric system, the surrounding forest could be cleared and the wood turned into "long-lived" materials for building construction or biomass to fuel cars, a technology that is becoming more popular, he said. This approach costs a lot more money than prescribed burning, he said, but the more the forest burns, the higher Canada's greenhouse gas emissions, which only serve to exacerbate the climate change fuelling more destructive wildfire seasons.

In extreme years, Dr. Kurz said studies show wildfires approach 30 per cent to 40 per cent of the annual carbon emissions from all other industries across Canada. 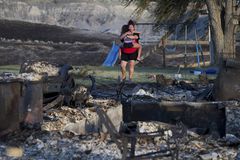 B.C. officials fear winds could spread wildfires as some evacuees return home
July 23, 2017
As B.C. blaze continues to burn, researchers ask: Will wildfires get too intense to fight?
July 14, 2017 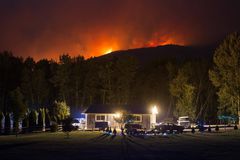