Bobby Fulton is a cannabis-oil evangelist. The Australian woman uprooted her family two weeks ago to spend the summer in Victoria so her two daughters suffering a rare degenerative lung disease could get a steady, legal supply of the drug.

The family of seven has been given free accommodation in Victoria and free cannabis by a local marijuana advocate and says it is now taking advantage of last month's Supreme Court ruling ensuring a patient's right to consume cannabis derivatives, which Ms. Fulton credits with extending her daughters' lives.

Back in their Australian hometown, located just south of Adelaide, 12-year-old Tabetha and Georgia-Grace, eight, used corticosteroids to manage the inflammation for years, but those drugs have caused serious side effects such as osteoporosis, weight gain and damage to the liver and kidneys, Ms. Fulton said.

Both need to be hooked up to a constant supply of oxygen to manage the inflammation of their lungs that makes them feel as if "it's like they're walking up a very, very steep hill," Ms. Fulton said.

After her elder daughter collapsed last October from toxic levels of the steroids, the family tried cannabis oil.

Within two weeks, Tabetha's heart had returned to its normal size and a month after consuming cannabis oil on a daily basis she needed oxygen only at night, her mother said.

But using cannabis oil in Tabetha's situation was still illegal in their state, so they are spending six weeks in Victoria to treat both daughters with a millilitre of sunflower oil infused with THC each morning.

"Our main objective is, of course, to extend our daughters' lives," Ms. Fulton said.

Ms. Fulton said she makes the oil herself by cooking dried marijuana at a heat low enough to extract the medicinal, not psychoactive, ingredients from the drug. Alex Abellan, the founder of the National Access Cannabis chain of clinics, said the two girls are on a six-month medical visa and were able to get medical marijuana prescriptions mailed to his home, where he is letting the Fultons stay, through the federally licensed system.

So far, 11 of Canada's 25 licensed commercial-scale pot growers have applied to Health Canada to sell cannabis oils, but they must pass inspections of their new production facilities before they receive an official exemption to sell the new products.

Last month, the Supreme Court of Canada released a unanimous decision that said patients had the right to consume the drug in ways other than smoking, such as oils, cookies and tinctures. The court said Health Canada's system subjected sick people to the risk of cancer and bronchial infections and could prevent them from choosing a more effective treatment.

At the time, federal Health Minister Rona Ambrose said she was outraged by the ruling, but Health Canada announced last week that it would allow licensed producers to sell the oil. The producers have been mailing dried marijuana to registered patients since the medical marijuana system was overhauled last year.

Producers will not be able to sell seeds or any plant material that can be used to propagate marijuana.

Brent Zettl, CEO of licensed producer Prairie Plant Systems, estimated that every one of the licensed commercial growers will eventually seek Health Canada's approval to cultivate and sell cannabis oil, a process that will be "just like a brand new application, almost." He said producers will want to capitalize on the high consumer demand for oils, especially from parents of sick children and seniors who are against smoking dried cannabis, which activates more of the plant's psychoactive properties.

Mr. Zettl, whose company was the first grower licensed under Health Canada's new regime, said the addition of oils could give the industry a much-needed boost in sales. He said Canada's network of large growers are supplying only about half the roughly 42,000 patients that were registered under the old federal system, which allowed small-scale licensed producers to grow at home. Health Canada couldn't confirm these numbers Thursday.

By offering oils, producers also hope to bridge the "large disconnect" with the country's medical establishment, he said. Doctors are the gatekeepers to the medical marijuana system, but the majority have resisted prescribing the drug because of a dearth of clinical evidence and a fear over improper dosing.

Oils are more "pharmaceutical-like" because the strength of their THC and CBD content must be measured in milligrams per millilitre, Mr. Zettl said. Those will offer doctors "something they're more used to seeing" rather than the percentages that must be provided for dried medical marijuana buds, he added. Under the new guidelines, the label must indicate the equivalence to dried buds. Mr. Zettl estimated that a 100-millilitre bottle of cannabis oil could be the same amount as 15 to 30 grams of dried bud, a level of strength that presents a greater risk of taking too much. Overdosing on edibles can bring anxiety, psychosis and nausea.

"It's going to need to be carefully administered," he said, adding that he estimated his company could be finished with government inspections and be shipping oil to customers within two months.

Jason Broome, a Kelowna-based businessman, said he tried last year to import cannabis oils rich in CBD from the United States through legal channels, but failed because of Health Canada's strict rules. He said many Canadian parents of sick children ended up travelling to Colorado and California to buy the oils and take their chances smuggling them north of the border. He welcomed the production of oils by Canada's licensed producers as something that "makes absolute sense." 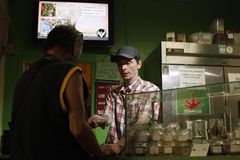 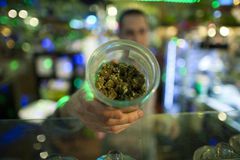 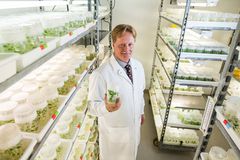