It is, perhaps, the most contentious dish on the planet.

It has divided communities, enraged activists, prompted allegations of racism and stirred politicians to action. The distinctive flavour comes from pork bones and chicken, but its infamy comes from the flavourless strands of cartilage floating at the top of each bowl.

How do you solve a problem like shark fin soup?

Some believe the answer might be found in the Pacific waters of British Columbia. But, much to the chagrin of a fledgling local fishery – a sustainable alternative to shark fins – no one seems willing to invest the dollars needed to find out.

Shark fin soup is revered by many in the Chinese community as an integral part of the culture; a celebratory indulgence traditionally served at weddings and banquets, symbolizing prosperity and good fortune. Dried shark fins sell for as much as $1,500 a kilogram.

However, overfishing has put some shark species at risk of extinction. And the practice of "shark finning," where poachers slice fins and tails from live sharks that are then left to die, has prompted attempts to prohibit the sale of the soup in restaurants across the country. A municipal ban in Toronto was recently struck down on a technicality, but others have succeeded. There is pending legislation in several towns and cities, including Vancouver and Richmond, which boasts the highest concentration of residents of Chinese descent of any place in Canada.

The debate has provoked strong emotions. David Chung, the owner of the Jade Seafood Restaurant, who heads the B.C. Asian Restaurant and Cafe Owners Association, likens a ban on shark fin soup to a direct attack on Chinese culture. "What is important to you, hockey? If I take away hockey, no more hockey, what do you think? This is like shark fin in China," Mr. Chung said in an interview with The Globe and Mail.

Speaking to the Chinese-language newspaper Ming Pao last year, Mr. Chung referred to Vision Vancouver Councillor Kerry Jang as a "banana" – a pejorative and racist term suggesting that the politician's support for a ban on shark fin soup showed he had lost his cultural connection to his Chinese heritage.

Yet for all the ugliness the fight over shark fins has evoked in British Columbia, a potential solution may exist in the waters near Port Hardy off the coast of Vancouver Island. It is here that the ocean teams with spiny dogfish.

The dogfish is a small shark. Mature adults measure between 75 and 105 centimetres. The species had long been considered a by-catch or a nuisance fish by fisherman in B.C. But a market for its meat has developed in Europe and Asia. For example, the fish's belly is prized in Germany, where it is served smoked.

Besides its diminutive scale, what sets the dogfish apart from other shark fisheries is the fact that it has been deemed a sustainable catch. In 2011, the B.C. spiny dogfish became the first shark fishery in the world to be certified as sustainable by the Marine Stewardship Council. The East Coast dogfish industry has also recently been granted status by the council.

Michael Renwick, who heads the B.C. Dogfish Hook and Line Industry Association, believes fins from dogfish may offer a solution to the shark fin debate. The major question, he says, is whether it is economically viable to render dogfish fins for soup.

"It's a very time-consuming and difficult process," Mr. Renwick said.

The fins from B.C. dogfish are already sent to Asia, but the industry does not know how they are used. Mr. Renwick has asked several Chinese restaurants in the Vancouver area to process dogfish fins and try them in shark fin soup, but none have agreed to do so.

Mr. Renwick hopes another plant in the province will agree to process the fish, which could revive efforts to prove the viability of dogfish in shark fin soup. 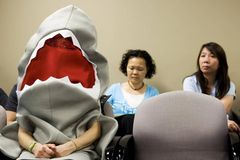 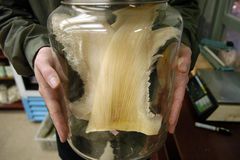 Follow Andy Hoffman and Daniel Bitonti on Twitter @iamandyhoffman @danbitonti
Report an error Editorial code of conduct
Due to technical reasons, we have temporarily removed commenting from our articles. We hope to have this fixed soon. Thank you for your patience. If you are looking to give feedback on our new site, please send it along to feedback@globeandmail.com. If you want to write a letter to the editor, please forward to letters@globeandmail.com.
Comments