Truckers who have tied up cargo worth billions of dollars with a strike at Port Metro Vancouver for the past month are remaining defiant despite the introduction of back-to-work legislation by the B.C. government.

Bill 25, which was introduced Monday afternoon, threatens heavy fines and will impose a 90-day cooling-off period on members of Unifor, the unionized drivers who are on strike alongside non-unionized, independent truckers. But the union is warning it may stay off the job despite the tough legislation.

"It doesn't get the port operating," Unifor B.C. director Gavin McGarrigle said of the bill the government brought in to get Canada's largest port back in business. "You are going to have the non-union folks that are not going to go back and our folks are telling us they are prepared to risk jail time. If the whole goal is to get the port up and running as fast as possible, we don't see how this is going to do it."

Shirley Bond, the Minister Responsible for Labour, introduced the bill saying a cooling-off period "is the least interventionist of the options" available to the government. She described Bill 25 as "a necessary step" that "comes after multiple attempts to end the dispute."

Ms. Bond told reporters she doesn't expect the bill to be passed into law before Wednesday. The NDP is expected to oppose it.

The law would impose a cooling-off period of 90 days with a possible extension of another 60 days. It states that within 72 hours of the bill coming into law, the parties have to return to bargaining. While the cooling-off period is in place, the last collective agreement is extended. The union and employers face fines of up to $10,000 if they violate the terms of the law, while individual truckers can face fines of up to $400 a day if they fail to comply.

Ms. Bond said the intent is to use the least amount of intervention possible, to encourage the parties to negotiate with the help of a mediator.

"If truckers go back to work, Vince Ready is available to both parties. We understand there are issues that need to be resolved," she said. "One of the things that concerns me most about circumstances we face today is our reputation. Once you see ships being diverted, there is the risk they will not return to this port. From our perspective, this is about jobs, it's about the economy."

The legislation orders members of Unifor to terminate their strike and directs employers to not lock out any employees.

Transportation Minister Todd Stone said in the House that the strike had to be ended because it is damaging B.C.'s economy. He said 100,000 jobs depend on the port, which handles $126-million in cargo a day.

"B.C.'s reputation across the world is at stake with our trading partners," said Mr. Stone, who noted Monday was day 26 "of the disruption of Canada's largest and most important port."

He urged truckers to "come back to work as quickly as possible" and said concerns the truckers have raised (about long waiting times and hourly pay rates which haven't increased in eight years) can be addressed through mediation. "But before that can happen the truckers need to go back to work," he said.

NDP labour critic Harry Baines was critical of the government for introducing what he described as "heavy-handed back-to-work legislation."

During Question Period, Mr. Baines said the government was warned last July that labour problems were likely at Port Metro Vancouver unless the concerns of truck drivers were dealt with. "Whose fault is it?" he asked about the strike, before saying the provincial government "was sleeping … they did nothing and as a result we have turmoil on our hands right now." 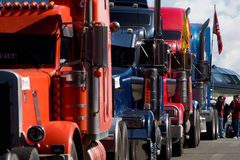 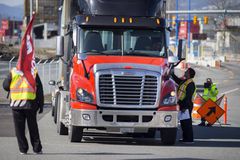 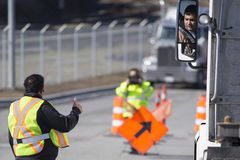 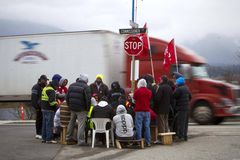 B.C. government to force truckers back to work in port labour dispute
March 19, 2014 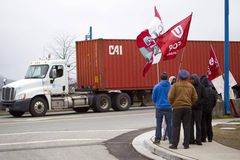 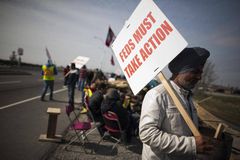