The Leader of British Columbia's Opposition New Democrats says he won't take a position on the most expensive public infrastructure project in the province's history until after next spring's election, resisting calls from a former NDP premier to campaign on a promise to kill the Site C dam.

NDP Leader John Horgan says while he would be prepared to shut down the hydroelectric dam if a postelection review by the B.C. Utilities Commission supports that decision, he does not yet have enough information to take a formal position. The project has come under fire from environmentalists and First Nations leaders, in part because it would flood more than 5,000 hectares of land.

Plans for the Site C dam on the Peace River in northern British Columbia have been in various stages of planning for decades. Construction began in 2015, with completion expected in 2024 at a cost of $9-billion.

Last month, former NDP premier Mike Harcourt called Site C a "disaster" destined to go way over budget and said it would be in the province's interest to cut its losses as early as possible.

"I appreciate his enthusiasm," Mr. Horgan said in a year-end interview with The Globe and Mail. "But I also have to be responsible for the taxpayers' money. Until I get an opportunity to look at the contracts to see what they say, what are the opportunities for the province to step back from this, I think it's irresponsible for me to go beyond saying, 'I am going to look at it when I get there.'"

He said he has talked through his approach with Mr. Harcourt, whom he regards as a friend. "Mike Harcourt and I went back and forth on this. He said, 'Just do it.' I said, 'Mike, it's easy for you to say – you're retired.'"

Ms. Clark has been a strong supporter of Site C and LNG exports, and while she was initially skeptical of pipeline proposals, she has hinted her government will likely come on board.

The New Democrats' handling of those issues during the 2013 campaign, in particular a mid-campaign decision to oppose Kinder Morgan's planned expansion of its Trans Mountain pipeline, was seen as a significant factor in the party's surprising loss. Mr. Horgan also finds himself on the opposite side of the pipeline issue from Alberta's NDP Premier Rachel Notley, who recently visited British Columbia, and has spoken to Mr. Horgan personally, to sell the virtues of the project.

In an interview on Thursday, Mr. Harcourt said he wasn't about to second-guess Mr. Horgan on what he described as a "consistent" Site C position. Mr. Horgan said he does not believe that work on Site C is so advanced it could not be scrapped. He said there must be an expedited review of the project by the B.C. Utilities Commission after the next election.

"Christy Clark isn't going to stop it. I am going to send it to the [utilities commission] and if the reviews come back, saying it's not in the public interest, it won't proceed," Mr. Horgan said.

B.C. Green Party Leader Andrew Weaver said Mr. Horgan is dithering on Site C. Mr. Weaver, who supports killing the project, said the NDP has been "all over the map on Site C." He called a utilities commission review a "waste of time and money" because various independent studies have shown it is fiscally reckless to proceed with the project. "We don't need to study it more."

The B.C. Liberals have declined to refer Site C to the B.C. Utilities Commission for review, saying that elected officials should decide on the project and not the commission, an independent regulatory body that reviews electrical capital projects and sets hydro rates. Some, including B.C. municipalities, have asked the province for a commission assessment, but the government has defended its approach, saying the project has been through other reviews, including one by the accounting firm KPMG and also by the Finance Ministry.

Arlene Boon, who lives in the Peace region and stands to lose most of a family farm that dates back to the 1940s due to Site C-related flooding, said there was some merit to Mr. Horgan's position because a review could help kill the project forever.

"If I could, I would say, 'Stop it right away.' But ratepayers and taxpayers in the province need to know why," Ms. Boon said from her home in Bear Flat, near Fort St. John, that stands to be destroyed by a highway built in association with Site C. "We would like to see it stopped, absolutely, and to prove that it's not needed."

Joe Foy, the national campaign director of the Wilderness Committee environmental group, said Mr. Horgan's caution creates an exasperating situation for Site C critics, who see the project as so "egregious" it must be stopped. "With one party, there's no hope," he said, referring to the BC Liberals. "With the other party, there's some hope."

Mr. Horgan, a Victoria-area member of the legislature since 2005, was acclaimed as NDP leader in 2014. He has his own hopes about returning the NDP to office for the first time since 2001, when the party was ousted after a decade in government.

Mr. Horgan declined to assess the NDP's 2013 campaign approach, widely questioned after Ms. Clark led the Liberals to an unexpected victory with a jobs-focused campaign that included attack ads on Adrian Dix. That NDP leader disdained such attacks in favour of a more positive approach to politics.

"I am not going to give [the BC Liberals] a free pass for the last 15 years," Mr. Horgan said, citing increased costs for families because of rising rates for hydro and medical-services premiums. "People need to be reminded of that."

But it's unclear whether Mr. Horgan, despite travelling the province and holding occasional town halls among commuters on a bus in the Victoria area, has raised his profile enough to compete for voter attention.

"I'm doing everything I can to get out there," Mr. Horgan said. He said he expects the leaders' debates will raise his profile. "People will get to know me and they will make a choice."

Recent high-profile campaigns, he said, have suggested all bets are off. "This notion that historically it has always been thus and, therefore, the future will look the same has been thrown out by Notley, Trudeau, Trump and Brexit. The traditional thinking on how people vote is right out the door. You have to earn the vote every single time." 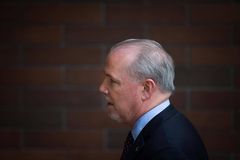 Former B.C. leaders divided on merits of the Site C hydroelectric project
November 13, 2016
Ex-premier Gordon Campbell stands by B.C. Site C dam decision
November 8, 2016
Follow Ian Bailey on Twitter @ianabailey
Report an error Editorial code of conduct
Due to technical reasons, we have temporarily removed commenting from our articles. We hope to have this fixed soon. Thank you for your patience. If you are looking to give feedback on our new site, please send it along to feedback@globeandmail.com. If you want to write a letter to the editor, please forward to letters@globeandmail.com.
Comments