British Columbia's new NDP government will continue support for the development of a liquefied natural gas sector, despite its past criticisms of the former Liberal government's aggressive pursuit of the industry.

Jen Holmwood, a spokeswoman for the NDP, said in a statement last week a more detailed outline of the new government's view on LNG will be upcoming, but she said the NDP will conditionally support the industry. The Liberals campaigned in the last two elections on an LNG sector becoming a major boon for the province, creating jobs and revenues.

"We will ensure any LNG development guarantees jobs and training opportunities for British Columbians, gets a fair profit for BC for our resources, benefits and includes First Nations in a meaningful way, protects our air, land and water, and lives up to our climate-change commitments," Ms. Holmwood said in the statement.

But Adam Olsen, one of three BC Green Party members of the legislature who have committed to support the NDP as government, said the Greens remain opposed to LNG development.

"LNG is going in the wrong direction," Mr. Olsen said, referring to moving beyond economic development based on fossil fuels.

But he added the differing positions on LNG do not indicate a schism between the two parties and said the issue will be a matter of discussion between the two in coming weeks. The Greens are giving the New Democrat support allowing them to govern.

Rich Coleman, the former B.C. Liberal deputy premier who was also natural gas development minister and chair of the cabinet working group on LNG, said he doubted the NDP is serious about LNG given their comments on the campaign trail and in the legislature.

"I am very concerned for LNG simply because of the message they have sent all the way through their campaign and in the house and their debates, and particularly now with this little agreement they have with the Greens who are also totally opposed to LNG," said Mr. Coleman, who travelled throughout Asia making the case for B.C. as a producer of liquefied natural gas.

Despite nearly five years of former Liberal premier Christy Clark touting the economic potential of LNG, only a small-scale project 65 kilometres north of Vancouver is in the works. Pacific NorthWest LNG, led by Malaysia's state-owned Petronas, is also seen as the best bet for proceeding by industry analysts.

Advances in LNG projects in B.C. have, analysts say, been stalled because the world is awash in LNG supplies and low prices in Asia, for the fuel, have rendered most of 19 B.C. LNG proposals uneconomic.

During the recent provincial election, the NDP said it would eliminate tolls on a pair of Lower Mainland bridges by draining what Mr. Horgan called the "LNG fantasy fund" the Liberals set up to launch legacy funding for the sector.

In a section headed Christy Clark's Broken LNG Promises, the BC NDP platform said the former premier had fallen short of an "LNG windfall" promised in the 2013 election that included one plant up and running by 2015 and five by 2020, as well as 100,000 new jobs and $100-billion in LNG fund, officially called the prosperity fund.

The prosperity fund was initially financed with $100-million from a surplus forecast for the 2015-16 fiscal year. The Liberal government launched the fund, intending to add LNG revenues as they came in.

David Keane, president and chief executive officer of the BC LNG Alliance, which operates to provide information on the industry, said in an interview that he is optimistic about the sector surviving previous NDP skepticism.

He said he had met and briefed Mr. Horgan before the election on LNG. Mr. Keane said the NDP leader was supportive. He also said he hoped to meet again with the Premier and Energy Minister Michelle Mungall in early August.

Mr. Coleman said if the NDP wants the industry to gain traction in B.C., they are going to have to step up and give a different message than they have previously offered.

"I don't see them bringing any confidence from the international money markets and the people that would make the multibillion-dollar decisions that they're going to have to make in order to create those tens of thousands of jobs."

A tanker with oil from the Kinder Morgan pipeline plies the waters off B.C.
May 19, 2017 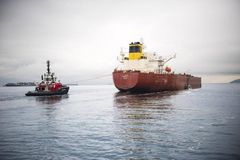 B.C. hereditary tribal leader aims to fight Pacific NorthWest LNG project
June 14, 2017
B.C.’s Andrew Weaver vows to consult First Nations on resource development
June 8, 2017
Follow Ian Bailey on Twitter @ianabailey
Report an error Editorial code of conduct
Due to technical reasons, we have temporarily removed commenting from our articles. We hope to have this fixed soon. Thank you for your patience. If you are looking to give feedback on our new site, please send it along to feedback@globeandmail.com. If you want to write a letter to the editor, please forward to letters@globeandmail.com.
Comments