Crews shifted focus on Saturday to cleaning the shoreline after the toxic spill in Vancouver's English Bay, as questions continued about whether the city's shuttered coast guard station could have meant a speedier response.

About 2,700 litres of bunker fuel spilled on Wednesday from the MV Marathassa, a Japanese-built ship on its maiden voyage to pick up grain from Vancouver.

Roger Girouard, the coast guard commissioner overseeing the clean up, said a Transport Canada flyover at sunset Friday saw only about six litres left in the water and most of it likely evaporated overnight.

"This is coming along extremely well. We'll be tenacious, we'll finish it up," he vowed on Saturday.

The vessel remains anchored in the bay and wrapped in an oil-absorbing boom. Crews are still examining how to clean the hull and remove the boom without allowing any black oil to escape.

He said while the fuel is not expected to sink to the ocean floor, there are likely "pockets" that are not visible. Discussions are now underway about how best to examine the sea bed, he said.

With all the recoverable oil removed from the water, the arduous process of cleaning beaches in areas includng Stanley Park and West Vancouver has begun. Crews in protective clothing are scrubbing, flushing, and removing tar balls that have washed up.

Girouard said on Saturday that wildlife experts were examining about 30 affected birds in a Vanier Park pond, after they flew into English Bay and brought back oil.

The coast guard has faced harsh criticism for its response to the spill, including from British Columbia premier Christy Clark and Vancouver Mayor Gregor Robertson, who called it "totally inadequate."

While the initial report of pollution in the water came in at 5 p.m., the coast guard did not have an oil-absorbing boom in place until midnight and did not alert the city until 6 a.m. Thursday.

Fred Moxey, former commander of the Kitsilano Coast Guard, said on Saturday that if the station had been open, it would have been able to respond to the spill in 10 minutes or less.

The Conservative government shuttered the station in 2013 as a cost-cutting measure, which Moxey called an "absolute disgrace."

"I'd like to say how important it is to get out there on an incident as quickly as possible," he said. "Once you start discharging oil and it starts to move around English Bay, and time goes by, and tide and wind, now it starts to collect in other ships."

He said the station was equipped with an oil spill response vessel, a Coast Guard cutter and a Zodiac rescue boat and had access to more than 700 metres of boom.

But Girouard said the station only had "ready access" to about 300 metres of boom and didn't have enough equipment to handle the spill on its own.

The spill has also prompted fresh criticism of Kinder Morgan's proposed Trans Mountain pipeline expansion. Concerned residents gathered across the province on Saturday to call on Clark to pull out of the National Energy Board review process.

The expansion would bring more tankers, some carrying diluted bitumen, to B.C.'s coast. One environmentalist at English Bay called the recent spill an "absolute wake-up call."

"The handling of that has been really concerning, that we aren't prepared to deal with a relatively small spill of bunker fuel," said Alexandra Woodsworth of the Georgia Strait Alliance.

"If we can't deal with that, how can we deal with a massive spill of diluted bitumen?"

Kinder Morgan sent a statement calling the spill an "unfortunate situation" it is watching closely but said it is unrelated to Trans Mountain. 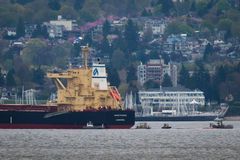 In photos: Scenes from the oil spill in Vancouver's English Bay
Gallery
April 9, 2015 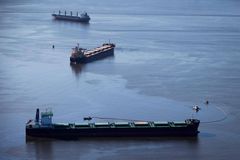 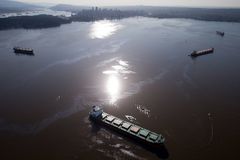