"Danger – rugged steep terrain with drop-offs and cliffs. No access," the City of Burnaby map cautions about an area in the conservation lands which surround Simon Fraser University, atop Burnaby Mountain.

Now Trans Mountain survey teams trying to plot a possible pipeline route through the rugged parkland have gotten a similar warning from the City of Burnaby. The city issued stop-work orders to survey crews on Tuesday while RCMP officers looked on, and on Wednesday Mayor Derek Corrigan threatened court action to keep Trans Mountain from accessing the conservation area.

Mr. Corrigan said in an interview the city doesn't want Trans Mountain cutting trees in the popular parkland, which features both manicured gardens and a wild forest region crossed by walking paths, including the Trans Canada Trail.

"It's habitat for a wide variety of wildlife … It has a multitude of birds. It's used extensively for citizens to go hiking. It has become an essential part of the park system in the Lower Mainland," Mr. Corrigan said of Burnaby Mountain. "It's not a place for a pipeline and not a place for these kinds of [survey] activities."

Trans Mountain has been trying to do work in the conservation area as it prepares a final route plan for the twinning of its existing 1,000-kilometre oil pipeline from Alberta to a Pacific terminal in Burnaby, B.C. The proposed pipeline is under study by the National Energy Board, which began public hearings in Edmonton this week with submissions from First Nations. Hearings will continue in B.C. in October and November.

Trans Mountain argues it has authority under the National Energy Board Act to access any land it needs to for the purposes of survey work. But Mr. Corrigan, one of the leading political opponents to the project, said city bylaws can't be overruled like that, and he's ready to go to court to stop Trans Mountain from accessing the conservation area.

"By cutting down trees in our park you are directly confronting our bylaws," he said. "If they think they've got that kind of authority then they need to … show the courts." He said a legal challenge would likely end up in the Supreme Court of B.C.

Ali Hounsell, a spokesperson for the Trans Mountain expansion project, said the company has not yet decided what its next step will be. She said survey crews left the conservation area on Wednesday not because of the stop-work order, but because city staff were in the vicinity.

"It was a safety issue in terms of having folks, city staff, within the working area so [survey crews] were unable to conduct that work safely and so chose not to," she said.

Ms. Hounsell said Trans Mountain believes it has authority to work in the area, despite objections from the city. She said the company received an NEB ruling to that effect last month.

"We're consulting with our legal counsel," she said. "Back in August the NEB confirmed … we are able to conduct the needed geotechnical, engineering and environmental [work] … so that's our position at this point … we understand Burnaby has a different position."

Ms. Hounsell said the crews cut down seven trees Tuesday; she wasn't sure how many more would need to be cut.

Sara Kiley, a spokesperson for the NEB, said the ruling issued in August, in response to a Trans Mountain letter, states the company "has the power to enter into and on Burnaby land without Burnaby's agreement." But the City of Burnaby argues that because that ruling was silent on the issue of municipal bylaw authority, Trans Mountain doesn't have the access rights it claims.

"The city interpreted in one way and the company a different way," Ms. Kiley said of the NEB ruling. "So at this point if Trans Mountain decides to pursue legal action I guess it's up to them." 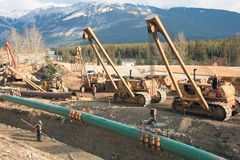 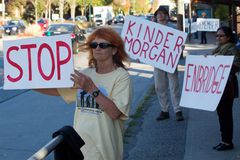 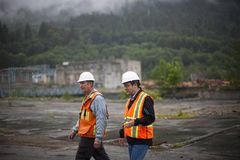