After a string of high-profile departures, Premier Christy Clark reached deep into her caucus benches to form a new cabinet that will carry her B.C. Liberals into a tough election campaign just seven months away.

Ms. Clark named a new Finance Minister, Education Minister and Transportation Minister on Wednesday to replace veteran Liberals who won't seek re-election in May, 2013. Ms. Clark's party, now in its third consecutive term in office, has been bleeding voter support to the B.C. New Democrats on the left, and the B.C. Conservatives on the right.

In a bid to gain some traction, Ms. Clark promised her new team will concentrate its efforts on making B.C. more affordable for families. The Premier dangled the prospect of new tax relief, saying her government needs to find ways to help families "who feel they just aren't getting ahead."

"There are a lot more initiatives on the way," she promised.

In the short term, her party is focused on bringing back disaffected members of the coalition who have been drifting to the B.C. Conservatives. Appointing Rich Coleman as her deputy premier, Ms. Clark has crafted an inner circle at the cabinet table she hopes can make that appeal despite the loss of a key figure, Kevin Falcon. Ms. Clark gave members of her caucus until the end of August to declare if they would stand in the next election – a requirement for cabinet eligibility – a commitment Mr. Falcon and more than a dozen others would not give.

"It's going to set the foundation for us to be re-elected," Ms. Clark told reporters at Government House in Victoria as she unveiled her 16-member team.

The biggest change has Mike de Jong taking on Mr. Falcon's Finance portfolio. A trio of key ministers did not move: Pat Bell remains the Jobs Minister, Mr. Coleman keeps Energy, Mines and Housing, while Shirley Bond continues as Attorney General and Justice Minister. But there is no senior minister from the liberal side of the coalition party to replace George Abbott, who like Mr. Falcon has opted out of the next election campaign.

A month from now, Ms. Clark's party will reach out to former supporters at a convention that will open its doors to non-members under the "free enterprise" umbrella. That convention will help establish the platform that will carry Ms. Clark's team into the spring campaign.

Bill Bennett's return to cabinet is another signal that Ms. Clark is reaching out to conservative-leaning voters. Mr. Bennett rapped the media for being pessimistic about his party's chances of winning the next election. Although he called the Liberal label an "encumbrance" for right-of-centre politicians like himself, he suggested the fledgling B.C. Conservative Party won't be a serious contender in the coming campaign despite polls showing it is competing with the Liberals in popular support.

"It looks like they are heading the same way that most of the right-wing fringe parties have headed over the past 20 or 30 years in this province," he said. "It's really up to us – if we offer conservative-thinking people the right kinds of policies and choices, they'll come with us."

However, Mr. de Jong, who at the same time is aiming to return B.C. to a balanced budget by February, acknowledged the challenge of running again for a party that is doing poorly in the polls against the front-running New Democrats. "These have not necessarily been the halcyon days of a government at the apex of its popularity," he deadpanned. "We have some work to do."

Mr. de Jong left parting advice to his successor in the Health Ministry, Margaret MacDiarmid: "The Aspirin is in the left-hand drawer."

Opinion
Is Clark shuffling deck chairs on the Titanic?
September 6, 2012 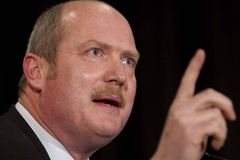 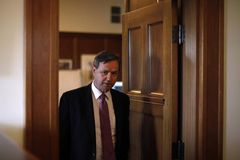 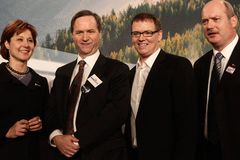