Family law in British Columbia will define domestic violence for the first time, part of a major package of changes that aims to cut down on court battles – and save lives.

The new Family Law Act, introduced on Monday by Attorney-General Shirley Bond, is intended to defuse conflicts when relationships break down by encouraging mediation and offering clear rules that reflect the make-up of the modern family. It also creates a new class of protection order when the risk of violence is detected.

The changes to the existing legislation, which hasn't been overhauled since 1978, will have broad repercussions right across the spectrum of family law.

The law defines who is the legal parent when children are born through assisted reproduction, and eliminates the possibility of parents suing their children for support. When kids are involved in a breakup, the courts will be directed to consider their best interests as the overriding issue when determining settlements.

Major changes are coming as well to the division of property. Significant assets that people bring into a relationship – such as a home or an inheritance – will be exempt from the 50-50 split that generally follows if that partnership dissolves.

The rules concerning the division of property will also, for the first time, apply to common-law couples who separate.

The 195-page bill will take up to 18 months to come into force – the time it is expected to bring judges, lawyers and other family justice professionals up to speed on the many changes.

The law will instruct the courts that emotional and psychological abuse can be components of family violence. It replaces the use of restraining orders with a new protection order if the courts deem that family members are at risk of domestic violence. Unlike a restraining order, a protection order could be granted even if a family's case isn't in the court system, and will be enforced under the Criminal Code, meaning stiffer penalties for violating it.

Since the beginning of 2008, 70 people have died in domestic violence in B.C., including 14 children and youth.

It took the province six years to rewrite the law, including consultation with hundreds of groups and individuals. Tracy Porteous, executive director of the Ending Violence Association of B.C., said the result of that effort is a "phenomenally progressive" set of rules.

She echoed Ms. Turpel-Lafond: "I completely believe this legislation has the potential to save lives." She said the family law system – from judges to counsellors – will now have access to a wider range of tools to help defuse conflict and mitigate risk.

The proposed law does not refer to "custody" and "access" when dealing with the roles of parents and children after a break-up. Instead, the law emphasizes "parenting responsibility." It is a change in tone designed to encourage cooperation. A parent who fails to live up to an order pertaining to child custody could face fines or jail time.

Keeping people out of the courts during the emotionally charged process of separation is a good idea, said Eugene Raponi, a lawyer with a family law practice in Victoria who was consulted on the bill.

"Getting them to think of the important aspects – their children, trying to put their problems in perspective – that's what you want to encourage and that is what this legislation is doing," he said.

Family law cases make up about one quarter of all trials now before the provincial and superior courts in B.C.

The Attorney-General told reporters she expects the changes to take pressure off the justice system, but she would not commit to increasing support for alternatives such as mediation and counselling.

"We look to see savings on the court side as we see some of those procedures come out of courtrooms and we have to rebalance our approach," Ms. Bond said.

B.C. has 24 family justice centres that offer counselling and mediation. All have waiting lists. 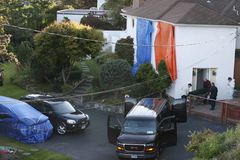