The former CEO of a company that provides catering services to sports venues across North America has pleaded guilty to animal cruelty charges after he was videotaped in a Vancouver elevator kicking a puppy.

Desmond Hague, who resigned from Centerplate Inc. last year, pleaded guilty Tuesday to one count of causing an animal to be in distress.

He was initially charged with two counts.

A surveillance video from a downtown Vancouver hotel in late July showed him in an elevator with a young Doberman pinscher, kicking it and yanking its collar.

Hague admitted it was him in the video.

Hague apologized to the dog's owners and issued a public statement saying he was deeply embarrassed by his actions.

Centerplate initially said Hague would donate $10,000 to establish a foundation in the dog's name and volunteer 1,000 hours of his time. The company announced Hague's resignation a week later.

The agency said the puppy belonged to Hague's friend.

The animal was returned to its owner on the condition it have no contact with Hague, the SPCA said.

A sentencing hearing is set for April 15.

The offence carries a maximum penalty of a $75,000 fine, up to two years in jail or a lifetime ban on owning animals.

Centerplate provides catering services to venues across North America, including BC Place, the home of the CFL's BC Lions. 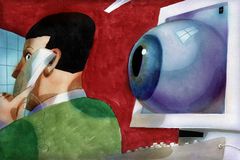