Refugee advocates say it's time to scrap measures that were introduced in the wake of the arrival of hundreds of Tamil migrants on the MV Sun Sea, after the jury at a high-profile human smuggling trial failed earlier this week to convict any of the four men accused of organizing the voyage.

The Sun Sea docked in British Columbia in August, 2010, carrying 492 Sri Lankan Tamils – 380 men, 63 women, and 49 children. The migrants, fleeing a country ravaged by civil war, cheered when they first spotted the Canadian flag. But many would be held in custody for months and advocates have said the government's response tarnished this country's reputation as a leader in refugee protection.

On Wednesday evening, a B.C. Supreme Court jury found three men not guilty, including one who was on board the vessel and two who were in Canada. The jury could not reach a consensus on the fourth man – the alleged owner of the ship who has been held in custody since he arrived – and a mistrial was declared in his case.

The ship's arrival, and its passengers' subsequent refugee claims, drove a fierce debate about how to handle such cases. The former Conservative government introduced rules in 2012 that allow for mandatory detention of "irregular arrivals" and prevent such arrivals from applying for permanent resident status for five years. Those restrictions remain in place.

Janet Dench, executive director of the Canadian Council for Refugees, said the Liberal government's resettling of Syrian refugees "marks a strong change" from the previous government, but she said the Conservative rules need to be undone.

"I hope that the government will take a long, hard look at what they did to the passengers on this boat, for the sake of people's human rights but also just taxpayer money," Ms. Dench said in an interview.

Ms. Dench expressed dismay about how the federal government handled the ship's arrival.

She pointed to a Canada Border Services Agency memo her organization obtained through an access-to-information request. The memo, written shortly before the Sun Sea arrived, said CBSA's approach to dealing with a smaller migrant vessel the previous year "may have been less effective than it could have been." For the Sun Sea, CBSA proposed a "more aggressive approach" and maximum use of detention.

Ms. Dench has also taken issue with former public safety minister Vic Toews's description of some of the passengers as "suspected human smugglers and terrorists" before the ship had even arrived.

David Poopalapillai, a spokesman for the Canadian Tamil Congress, said that, while members of the public and various churches voiced support for the migrants, the government's response was "disheartening."

"It was not a Canadian way of handling things, that's for sure," he said in an interview.

Immigration, Refugees and Citizenship Canada did not provide a response to questions Thursday. It appeared to forward one of the questions to the Minister of Public Safety, with a spokesperson for the minister saying no changes are planned at this time regarding irregular arrivals.

The Public Prosecution Service of Canada in a statement said it has 30 days to appeal and it is still examining Wednesday's verdicts.

Jason Kenney, the former minister for multiculturalism for the Conservative government, in a 2015 interview with The Globe and Mail regarding the Sun Sea, called the measures the government took "an overwhelming success."

The Sun Sea arrived in B.C. about 10 months after another Tamil migrant vessel, the Ocean Lady. While the Sun Sea generated international attention and continual updates – journalists camped out in their cars to watch it dock in the early morning – the Ocean Lady's arrival was something of a surprise. It carried only 76 passengers and was not subjected to the same level of scrutiny or public debate as the Sun Sea.

The Public Prosecution Service said the trial of four men linked to the Ocean Lady's voyage is expected to begin next week. 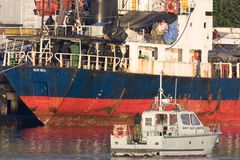 Judge tells jury to be cautious about eyewitness evidence in Sun Sea case
January 17, 2017
Man accused in human-smuggling trial was owner of Tamil ship: Crown
January 13, 2017
Follow Sunny Dhillon on Twitter @TheSunnyDhillon
Report an error Editorial code of conduct
Due to technical reasons, we have temporarily removed commenting from our articles. We hope to have this fixed soon. Thank you for your patience. If you are looking to give feedback on our new site, please send it along to feedback@globeandmail.com. If you want to write a letter to the editor, please forward to letters@globeandmail.com.
Comments are closed