For the past 41 years, there haven't been many cliffhangers in Alberta's general elections. The Progressive Conservatives have enjoyed the kind of security at the polls that would make the Communist Party of China proud.

The Tories' dynasty began in 1971 under Peter Lougheed. There's only been one time since that the party's hold on power was threatened – in 1993. That was just a few months after the colourful Ralph Klein had taken over as leader from the rather bland Don Getty.

Heading into the election, Mr. Klein's party badly trailed the Liberals. Under the leadership of former Edmonton mayor Laurence Decore, the Liberals ran on a decidedly un-Liberal-like platform that focused on attacking debt and getting the government out of the private sector.

But Mr. Klein mounted a brilliant campaign that took aim at many of the same issues identified by the Liberals. The Conservatives would win 51 of 83 seats and the election would become known as the Miracle on the Prairie.

Duane Bratt, a political scientist at Mount Royal University in Calgary, sees similarities between that election and the one expected to be called any day now in Alberta.

The Conservatives have a new leader, Alison Redford. And they are being centrally challenged by a party – the Wildrose Alliance – that is running on a platform far more conservative than its own. And like 1993, the Tories' main opposition is well financed.

You may have heard about the flashy campaign bus recently rolled out by Wildrose. In a province known for 18-wheelers, it was the positioning of two tires directly beneath a head-and-shoulders shot of party leader Danielle Smith that created an unfortunate, if comical, image that was hardly intended.

Ms. Smith, to her credit, handled the gaffe with aplomb, laughing it off and indicating that her picture would be moved to a more appropriate spot on the bus. Instantly, Boobgate was deflated.

There is one distinct difference, however, between this upcoming election and the one that ushered in the Klein era 19 years ago: the Conservatives are not trailing in the polls. In fact, most give them a comfortable lead and suggest that as long as Ms. Redford avoids handing her political enemies any potentially lethal ammunition, her party should maintain its iron grip on power.

That said, Wildrose is still expected to mount a fierce challenge. Ms. Smith is smart, charismatic and an excellent communicator. If she were facing Ms. Redford's uninspiring predecessor, Ed Stelmach, this would likely be no contest. But Ms. Redford, while perhaps not possessing the same degree of personal magnetism as Ms. Smith, is certainly brainy and a skilled debater. In fact, many believe she won the leadership of her party largely thanks to a particularly powerful debate performance she gave while still grieving the death of her mother one day earlier.

"The ballot box question is change," says Mr. Bratt. "Wildrose is saying that after 41 years in government, it's time for a change. And there is no question that after that length of time a government accumulates a lot of baggage.

"But the Conservatives are saying that Alison Redford also represents change, safe change, and that is very similar to Ralph Klein's slogan in '93. If you want change, let's go with safe rather than radical. Change you know and trust."

For the first time in memory, the Conservatives have started running attack ads – against Wildrose. It's both an indication of a party finally employing 21st-century campaign tactics and one that realizes it's facing a legitimate threat. If not to power, than to the comfortable majority the Conservatives are used to enjoying.

"I honestly think this is a two-stage campaign for Wildrose," says Mr. Bratt. "I think the goal is to establish a solid opposition presence in the legislature, 20 to 30 seats, and allow the next few years to become a testing ground for a government-in-waiting. I think that's the hope unless something absolutely crazy happens."

Which is unlikely, if the history of the past four decades in Alberta politics is any indication.

Alberta Tories do something about 'do-nothing committee'
March 20, 2012 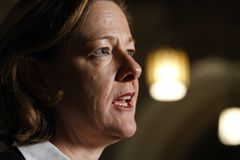 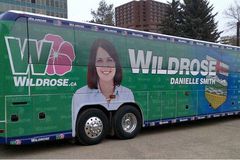 A bumpy ride: 5 bus breakdowns and blunders on the campaign trail
March 20, 2012 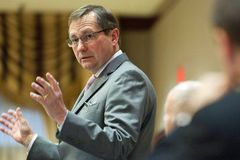