Mohamed Fahmy, sitting at a table in a downtown Vancouver coffee shop, thrusts both arms into the air, almost as if he is being held up. However, in this case he is making a point that is easy to see. His right arm is noticeably shorter than the left.

"My arm, it doesn't extend," says the 42-year-old former Egyptian bureau chief for Al Jazeera English, famed as a champion of press freedom after being imprisoned in Cairo for more than 400 days.

Mr. Fahmy broke his shoulder the day before his arrest as he intervened in a fight between a pair of fellow journalists. Bad enough to be in Cairo's maximum-security Scorpion prison. Worse to be dealing with its challenges with a painful injury.

"I've learned to live with a permanent disability," he says. Trying to extend his arms further, he fails. "This is as far as it goes."

To date, Mr. Fahmy says he has been distracted from seeking medical attention for his shoulder by intense work, with co-author Carol Shaben, on The Marriott Cell, a memoir of his incarceration that is due for publication this month. He reported the book from inside jail, recalling incidents, conversations and other details on the paper wrapping of prison food he smuggled out of jail through visiting family and friends. A screenplay for a feature film has been written, he says, by Michael Bronner, a producer of such Paul Greengrass films as United 93 and Captain Phillips.

"The script is incredibly engaging and eye-opening," he says.

The demonstration with his arms came after he was asked how he was doing these days. With a pair of colleagues, the Egyptian-born journalist whose family emigrated to Canada in 1990 faced allegations of fabricating the news as members of the outlawed Muslim Brotherhood. Mr. Fahmy was pardoned and released in September, 2015.

Prison, as recorded by Mr. Fahmy, was a harrowing ordeal with filthy, cockroach-infested conditions and a combustible mix of fellow inmates that included members of the Muslim Brotherhood, sympathizers of Islamic State and al-Qaeda fighters.

But more than a year after his release and move to British Columbia, Mr. Fahmy is so ferociously exuberant it seems as though the coffee shop can barely contain him. "Mentally, I have not had such inner peace in my life as I feel now," he says, smiling and joyful.

The book helps. It's the first major piece of journalism he has been involved with since he was released. He happily lectures at the journalism school at the University of British Columbia, where he is an adjunct professor. He is an advocate for imprisoned journalists through the non-profit Fahmy Foundation he and his wife Marwa Omara founded in 2015. He is exuberant about being married to Ms. Omara, a pillar of support during his incarceration, and a partner in his advocacy.

And he loves Vancouver, a city he first visited in his 20s. He has a file of photos of the city in an e-mail a friend sent him years ago. "I keep sending it to all of my friends and people, advocating that this is the utopia of Canada. There is no snow. Everybody lives peacefuly and co-exists together and the scenery is great," he says.

"I am just happy to be here. This is a cool city."

But there is a bit of turmoil in his life, a nagging question he has yet to resolve. Mohamed Fahmy, who worked for the Los Angeles Times and CNN before Al Jazeera, is trying to figure out how to get back to being a journalist again, covering stories in the Middle East despite the trouble his last stint there caused for him, his family and friends.

Recently, he says he turned down a freelance assignment – he declines to say who offered it – to cover the battle over the Iraqi city of Mosul pitting Iraqi troops against IS. "I didn't go because I just felt I needed to be here to promote the book," says Mr. Fahmy.

But promoting the book won't last forever. Beyond that, Mr. Fahmy is trying to figure out what a return to journalism looks like. He sees either being on the ground in the Middle East or being outside the region in Canada, working from a studio and depending on contacts.

But is it fair to get back into a job in a region that ended up with him in a situation that caused such emotional turmoil for his parents, his friends and, especially, his wife?

Mr. Fahmy laughs ruefully. He says that's the question in his head when he is up at 4 a.m. watching the news.

And then there's the question of whether he is too big to return to journalism, whether his advocacy is more important than being a storyteller in the field among other storytellers.

"That's the irony, that sometimes in a situation like what I have been through portrays you as a big fish or a star. But people tend to forget that the news is the star," he says, "I believe I have tried, all through my career, to make it always about the people we're covering."

The debate continues, but the outcome is clear, says Mr. Fahmy. "Look, I am still really attached to that story in the Middle East and I know I am going to go back to cover it somehow."

Al-Jazeera sues Egypt over crackdown on journalists, including Fahmy
May 16, 2018 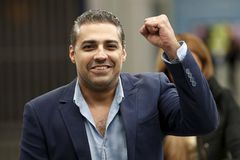 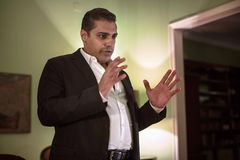