Angular and modern-looking, built with massive retaining walls of poured concrete and topped with a zinc roof, the Philip J. Currie Dinosaur Museum looks like nothing else in Wembley, a town of about 1,400 people 20 kilometres west of Grande Prairie, Alta.

In fact, drivers can see it from miles away – and that's precisely the idea, or one of them, behind the $34-million facility that opened in September with the goal of drawing visitors from near and far for decades to come.

"Most museums are not destination museums. They are not site-specific. This one is site-specific – it's about five or 10 minutes' [drive] from the world's densest bone bed for horned dinosaurs," George Jacob, museum president and chief executive officer, said in a recent interview. "That's the reason it is located in Wembley. Secondly, not many museums are visible from a great distance. Your line of sight is not usually 10 miles like it is here."

That visibility is part of an ambitious plan to make Wembley an essential stop for travellers on Alberta's Highway 43, which many drivers take en route to Dawson Creek and Mile 0 of the Alaska Highway. Local governments and businesses that have backed the museum expect a good chunk of those travellers to add the new museum to their plans; an economic impact study several years ago estimated the new site would pump $4-million per year into the province's economy.

Across the border in B.C., paleontologist Richard McCrea – curator of the Tumbler Ridge Museum, which showcases B.C. dinosaur discoveries – has watched the Philip J. Currie museum take shape and likes to think of it as a key stop on something he is pitching as the "northern dinosaur tour." Such a tour would take in not only the Philip J. Currie museum but the Tumbler Ridge site and other attractions in the region, which last year was added to a global network of UNESCO-designated geoparks.

Dr. McCrea, who studied with Dr. Currie at the University of Alberta, notes such multi-stop sites already exist in other parts of the world, including in the United States, where travellers for decades have been able to explore the Dinosaur Diamond. That 772.5-kilometre stretch of highway loops through Utah and Colorado and takes in dinosaur museums, petroglyphs and excavation sites.

A similar dinosaur highway in the border-straddling Peace River region could include dinosaur tracks in Grande Cache, Alta., and an as-yet-undeveloped site near Hudson's Hope, Dr. McCrea said.

That site, a grouping of tracks the size of a major shopping mall parking lot, has not been publicly identified because of fears it could be damaged by visitors. Dr. McCrea dreams of making it accessible through a facility that would allow viewing from an elevated catwalk. That proposal has the support of local governments and the Treaty 8 Tribal Association, which wrote a letter of support for the proposed research centre in July.

The proposed project "is within Treaty 8 Territory of B.C. and is considered a sacred landscape for our First Nation Communities," says the July letter. "Thus, any project must be developed with respect for and understanding of the Dane-zaa and Saulteau protocols related to sacred sites."

Treaty 8 supports the project for its potential benefit to understanding the region's prehistory and for potential future opportunities in employment, education and training, the letter adds.

Those opportunities can be, well, dino-sized. Traffic at the Tumbler Ridge museum is expected to jump to 7,500 this year compared with 5,000 last year – an increase Dr. McRea credits in large part to the geopark designation.

"Alberta is a powerhouse for tourism," he said. "Alberta knows how to do this and how to deal with dinosaurs.…it's now the job of our people, marketing tourism in B.C., to attract people even from just the Wembley museum – you know, 'hey, since you're coming on this dinosaur highway – come here too.'"

A cluster of sites has the potential to attract more visitors – and draw more sponsorship, partner and research interest – than one on its own.

"Having multiple museums in the same area is fantastic," Philip Currie, the namesake for Alberta's new museum, said in a recent interview from Japan.

The work he and others are doing in Alberta dovetails with exploration and research being conducted in Tumbler Ridge by Dr. McCrea and the museum's other paleontologist – also a former student of Dr. Currie's – Lisa Buckley.

Education is a big focus of the new museum. Last month, the University of Alberta announced a new professorship, also named after Dr. Currie and funded through an endowment from the museum society. The university is currently recruiting for the research position, which will focus on vertebrate paleontology.

As a laboratory, the chosen candidate will have a mass dinosaur grave containing species including Pachyrhinosaurus lakustai – named after Alberta science teacher Al Lakusta, whose initial finds in the Pipestone Creek area in the 1970s led to its recognition as one of the richest bone beds in the world.

In the run-up to its opening, some obervers worried the new Philip J. Currie museum would find it tough to compete with the renowned Royal Tyrrell Museum in Drumheller, about 800 kilometres to the southeast.

Mr. Jacob, however, doesn't see that as a problem, noting that Highway 43 travelers en route to Alaska represent a sizeable potential audience. In peak season, the Wembley stretch of highway can see up to 12,000 vehicles per day, so "even if five or 10 per cent of that number stops over, you're looking at a significant traffic flow," Mr. Jacob said.

"One of the biggest influences in my life was the [Royal Ontario Museum], because I grew up in the Toronto area," he said. "Kids always get interested in dinosaurs, but kids don't always keep their interest in dinosaurs. I was able to keep mine and develop it and take it further because of the fact I had this museum where I could actually go see real specimens. So for me, it was a major factor when I moved to Alberta – what I wanted to do was build similar displays here, so people here had the same opportunity." 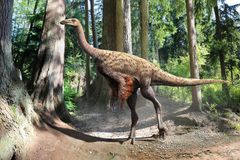